One of the most popular artists of the 20s, 30s and 40s, Tampa red was probably the all-time best-selling Georgia bluesman. He may well have been the most influential bottleneck stylist in blues. He perfected the single-string slide attack and smooth bottleneck tones mimicked by a number of Georgians and later post-war artists.

Tampa Red became known during the 1920s and ‘30s as "The Guitar Wizard," the musician developing a unique slide-guitar style that was picked up and expanded upon by Robert Nighthawk, Chuck Berry, and Duane Allman, among other followers. Born in Smithville, Georgia in 1904 as Hudson Whitaker, he earned the nickname "Tampa Red" for his bright red hair and upbringing in Florida.

Whitaker moved to Chicago in the mid-1920s and teamed up with pianist "Georgia" Tom Dorsey as "The Hokum Boys." Both musicians had previously played together in singer Ma Rainey's vaudeville band. The pair scored a big hit with the 1928 song "It’s Tight Like That," popularizing the bawdy style known as "hokum," an upbeat form of blues that often featured double-entendre lyrics. The duo would go on to record over 60 songs together by 1932.

When Tom Dorsey turned to Gospel music, Red continued as a solo artist, performing with his friend Big Bill Broonzy, and helping recent Delta immigrants to Chicago with food, shelter and bookings. The anchor of Bluebird Records, Red recorded his own material and played as part of the label's house band. Along with pianist Big Maceo Merriweather, they created what became known as "The Bluebird Beat," a mix of old-style blues with modern rhythms.

Red continued to record well into the 1950s, his records hitting the charts as late as 1949. Like many pre-war blues artists, however, Tampa Red found his career eclipsed by younger performers. Although Red would briefly be "rediscovered" during the folk-blues revival of the late- 1950s, the guitarist would retire from performing due to health problems caused by alcoholism. 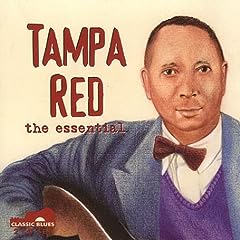 All About Jazz musician pages are maintained by musicians, publicists and trusted members like you. Interested? Tell us why you would like to improve the Tampa Red musician page.