“King of the Blues”

Born on a plantation in Itta Bena, Mississippi in 1925, Riley B. King would start from very humble beginnings. His family moved around the area, and the young Riley experienced early a life of constant motion. As a youngster he was a farm laborer, but drawn to music, he took up the guitar; he played on street corners, and would sometimes play in as many as four towns a night. In 1946, he hitchhiked to Memphis, to pursue his music career. Memphis was a large musical community where every style of music could be found, a good place for a young man who wanted to play the blues. Riley stayed with his cousin Bukka White, a celebrated bluesman in his own right, who was able to show him first hand the guitar foundations of the blues.

Playing an acoustic set of rural blues, he kicked around a lot of the clubs in Memphis, getting a break in 1948 when he performed on Sonny Boy Williamson's radio program on KWEM out of West Memphis. This led to steady engagements at the 16th St. Grill in West Memphis, and later to a ten-minute spot on black Memphis radio station WDIA. “King's Spot,” became so popular, it was expanded and became the “Sepia Swing Club.” Becoming a popular local disc jockey, Riley needed a professional sounding name. He was the Beale Street Blues Boy then Blues Boy King, and eventually B.B. King. This led to the studio recording of “Miss Martha King” for the local Bullet label, which didn’t cause much of a stir, but it did stimulate B.B. to pursue a recording contract.

He recorded a couple of singles for Bullet, and then signed with Modern’s RPM where he did “Three O’Clock Blues”, in 1951. This song proved to be a major hit, and he quickly followed that with “Please Love Me”, “You Upset Me Baby”, “Every Day”, (which would become his theme song), “Ten Long Years”, and “Sweet Little Angel”. These are available as “The RPM Hits 1951-1957” (Ace). These recordings rose to the tops of the R&B charts, and he went on the road to promote the songs, thus starting his life of incessant touring. This is how he developed his unique and signature style, every night, playing the blues. By 1955 he had a full time band, and hit the road, where he’s been ever since.

Riding the wave of popularity generated by the RPM records, he churned out a string of hits for their subsidiary Kent label, and stayed with them throughout the ‘50’s. This is the period where he made a name for himself, both in the record charts, and promoting the records by playing live. But by 1961, he had decided to change labels, looking to get a better deal than he was getting at RPM/Kent. He signed with ABC/Paramount records, which had just scored big by signing Ray Charles from Atlantic, they were aware of a bigger market, knew how to market B.B.’s music and were willing to pay for it. B.B. King received a $25,000 signing bonus. The overall environ was much more professional, and though they brought in first class arrangers and musicians, they pretty much gave B.B. a free reign, or so he thought.

There was in this period of the early ‘60’s a change of direction that took away from the blues essence he was known for and the record sales were not what everyone expected. Then producer/arranger Johnny Pate had the idea of recording B.B. on his home turf, a black nightspot, with his own band. The result was “Live at the Regal”, released in January 1965. It blew everyone away, and changed contemporary guitar forever. This album is responsible for the acceptance and adherence of a whole new generation, mostly white, to the blues. The guitar players alone who were influenced by it is staggering, and includes every blues and rock player from then on. It reestablished the way to play electric blues and made B.B. King “King of the Blues”!!

B.B. King has one of the world's most identifiable guitar styles, and his guitar Lucille is probably the most famous. Lucille is a Custom Shop Gibson ES-355. His first guitar back in his early days in Mississippi was a Stella acoustic. He borrowed from Django Reinhardt, Charlie Christian, Lonnie Johnson, of course T-Bone Walker and others, integrating his precise and complex vocal-like string bends and his left hand vibrato, both of which have become indispensable components of guitar vocabulary. Drawing heavily from the sweet single string T-bone style patterns, he plays with a short stinging attack, often in a cluster pattern. Starting with a five note signature, he follows with delicate phrases, sliding into notes, and allowing space for them to build. He listened a lot to jazz horn players, and it is portrayed in his use of dynamics, tension and tone, he is the undisputed master of an economical method of expression.

By 1968, B.B. was playing at the Newport Folk Festival and at Bill Graham's Fillmore West on bills with the hottest rock artists of the day, all which were huge fans. The Rolling Stones chose him to open their ’69 tour, thus gaining even broader exposure. He was able to capitalize on the Blues Revival at the time, but then again he was always around, and perennially on the road. In 1969 he was the premier act on the new ABC label Bluesway where he came out with “The Thrill is Gone”, which is his signature tune, and is his biggest hit to date. This opened up new venues and he was soon playing Las Vegas, in the same clubs where Sinatra played. By 1970 he was on the Tonight Show, and on the Ed Sullivan Show, the blues makes it to prime time America.

The 1970’s saw B.B.King sitting on top of the world, so then he decided to go back to his blues roots and did two excellent albums “Live at the Cook County Jail”, and “Completely Well/Live in Cook County Jail”. These showcase what he does best, playing in front of a live audience. Both for the ABC/MCA label where he continued to record for years to come.

He would go on to record many commercially successful albums, and of course stayed on the road performing around the world, known as the Ambassador of the Blues, as certainly no one has played the blues in so many places. MCA released a four cd box set “B.B.King, King of the Blues”, as a compilation of his recording history up to 1991. B.B. was inducted into the Blues Foundation Hall of Fame in 1984,the Rock and Roll Hall of Fame in 1987, and the Songwriters Hall of Fame in 1990.He received a Lifetime Achievement Grammy Award in 1987, and has received honorary doctorates from several colleges as Yale University in 1977; Berklee College of Music in 1982; Rhodes College of Memphis in 1990 and Mississippi Valley State University in 2002. In 1992, he received the National Award of Distinction from the University of Mississippi. There is also a star on the Hollywood Walk of Fame, and Presidential Medal of Honor.

In 1991, B.B. King's Blues Club opened on Beale Street in Memphis, and in 1994, a second club was launched in Los Angeles. A third club in New York City's Times Square opened in June 2000 and two clubs opened in Connecticut in January 2002. In 1996, the CD-Rom “On the Road with B.B. King: An Interactive Autobiography”, and his book “Blues All Around Me” (Avon Books) was published. “The Arrival of B.B. King” (Doubleday) by Charles Sawyer, a biography was published in 1980. Between 1951 and 1985 he listed an amazing 75 entries in Billboard’s R&B charts. There are multiple Grammy’s (over 15 last count) sitting on his shelf at home, and a wall full of Gold and Platinum Records representing millions in album sales. “Deuces Wild”, an all-star collection of duets, released in 1997, returned B.B. to the limelight. His 1998 album, “Blues on the Bayou”, was well received, and his annual B.B. King Blues Festival Tour is a top attraction. The1999 release of “Let the Good Times Roll—The Music of Louis Jordan” was a musical tribute to one of his heroes. B.B. teamed up with Eric Clapton on the multi-platinum release of “Riding with the King”, (Reprise 2000) which was Clapton’s tribute to him, an excellent record, a master and his pupil so many years later, so many roads traveled both still playing the blues.On the occasion of his 80th birthday in 2005, he recorded a star- studded duets album “80”(Geffen) as a testament to his will as an enduring musician.

B.B. King has released another gem of a album. “One Kind Favor” on Geffen Records.Recorded at The Village Recorder in Los Angeles, CA “OneKind Favor” is meant to sound like an album recorded in the50s. To get this sound producer T-Bone Burnett and King replicated the kind of blues band King had back in the day.Studio conditions of the time were reproduced. The result is a vintage sounding album filled with the songs that influenced King in his early days as an artist. Highly Recommended!

B.B. King was the most fortunate and unusual of bluesmen; a success on his own terms, and in his own time. He was the best known, most recognized bluesman on the planet. He stayed true to himself and his music, and made it on that. 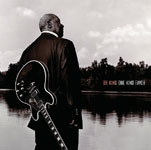 King Of The Blues

Blues on the Bayou 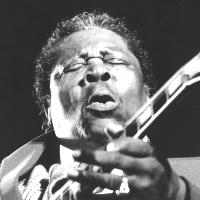 All About Jazz musician pages are maintained by musicians, publicists and trusted members like you. Interested? Tell us why you would like to improve the B.B. King musician page.