Howlin' Wolf was a seminal figure in the development of the Chicago blues style. His fierce, growling voice, punctuated by his trademark falsetto 'howl,' carried with it the primitive energy of the country blues he learned as a young man on the Delta. He successfully made the transition between the country style and the urban style, and in doing so, he was one of a handful of artists who shaped and defined the emerging urban blues sound. Literally hundreds of artists (his contemporaries included) have claimed him as an influence, and equal numbers have recorded their own versions of his songs.

Howlin' Wolf was born Chester Arthur Burnett on June 10, 1910 somewhere between West Point and Aberdeen, Mississippi. At age 13, his family moved to a plantation on the Mississippi River Delta near Ruleville, Mississippi. Prior to this move, Burnett's musical experience had been confined to singing in the Baptist church on Sundays. At age 18, his father gave him a guitar and around the same time he met Charley Patton, an influential blues performer. Taking a liking to the young man, Patton showed Burnett the basics of the Delta Blues style. For the next five years, Burnett farmed full time with his family while occasionally singing and playing at weekend fish fries and Saturday night parties.

In 1933, the Burnett family moved onto a plantation near Parkin, Arkansas, where Burnett learned to play harmonica from Sonny Boy Williamson, another influential Delta blues musician. He teamed up with Williamson, abandoned farming, and began moving around the Delta. Playing in bars and on the streets, Burnett became "well known amongst the itinerant musicians of Mississippi...." During his wanderings, Burnett crossed paths with "almost every major Mississippi artist" but he seemed most impressed with Patton's brand of showmanship. Burnett incorporated some of Patton's act into his own, performing tricks such as dropping to his knees, or lying on his back while whooping and hollering.

Burnett continued to roam the Delta, singing and playing until 1941 when he was drafted. After his discharge in 1945, Burnett returned to Parkin for a brief period of time. He then farmed on his own in Penton, Mississippi for two years. In 1948, Burnett moved to West Memphis, Arkansas, formed a band of his own, and gave up farming in favor of a career in music. Touring Arkansas and Mississippi, Burnett and his band "built a solid reputation for themselves in the Delta jukes."

Burnett's career-making break came at age 38, when he was given the chance to perform a weekly show on a West Memphis radio station, KWEM. In between songs, the program advertised grain and farm implements. The show was so successful, that Burnett was offered a job selling advertising to local store owners, a job he held until leaving for Chicago in 1952.

It was during his stint at KWEM that Burnett first began using the name, Howlin' Wolf, which he had heard on a Funny Papa Smith record. Up until that time, Burnett performed under various stage names, including Big Foot Chester and Bull Cow. However, the name Howlin' Wolf was particularly suited to his "fierce singing style, which was punctuated with falsetto whoops and howls."

The success of the radio program opened the door for Wolf's first phonograph recording, made in Memphis in 1950, and released on the Chess record label. The 78 RPM record, “How Many More Years,” and “Moanin' at Midnight,” sold 60,000 copies, a major hit at the time. The success drew the attention of a rival record label, RPM, and for a period of 18 months, both the Chess and RPM labels fought over the rights to Wolf's recordings. A contractual agreement was finally reached, and in the fall of 1952 Wolf settled down in Chicago, where he recorded exclusively for Chess for the remainder of his career.

In terms of sales, Wolf's recording career peaked in 1956, however he remained a featured artist at Chess. He enjoyed a renewed popularity during the mid-1960s, when he toured Europe extensively as part of a Chess blues revival show. During this period, popular British rock and roll bands such as the Rolling Stones began recording his songs and asking him to be the 'warm up' act on their tours. Standing six-foot, six inches, and weighing close to 300 pounds, Howlin' Wolf had a commanding stage presence that few who witnessed it could ever forget. Shouting in a voice born in the bottom of a gravel pit, whooping and hollering, furiously blowing into a harmonica over the wail of electrified instruments, Wolf was capable of bringing down the house while simultaneously "scaring its patrons out of their wits."

Toward the end of his career, Wolf was plagued with chronic kidney trouble and would perform only in cities where he had access to a dialysis machine. A friend recalled, "after each exhaustive treatment, he'd go straight to his gig." 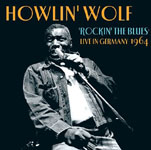 No Place To Go

All About Jazz musician pages are maintained by musicians, publicists and trusted members like you. Interested? Tell us why you would like to improve the Howlin' Wolf musician page.