James Cotton is one of the all-time greats of the blues harmonica, and one of the last of the original Chicago musicians who played and recorded some of the most exciting blues music ever. Cotton's harmonica virtuosity is amazing, recognized for the power and precision of his playing. Cotton and his harmonica are still blazing a trail through the music world and his legacy continues to grow with each passing year, a testament to this enduring Bluesman.

Born in Tunica, Mississippi, in 1935, Cotton fell under the spell of the legendary Sonny Boy Williamson at the tender age of nine and quickly became his protégé. Over the course of six years, Cotton lived, worked and traveled with Williamson, eventually assimilating many of his signature licks. Cotton was in Memphis in the early ‘50s and landed a gig with Howlin’ Wolf, recording “Saddle My Pony” at Sun Studios. His breakthrough “Cotton Crop Blues” was released in 1954, and not long after, he began his 12-year association with Muddy Waters, when Waters passed through town looking for a harp player. Cotton landed the gig, and worked with Muddy on the road and in the studio, recording many of the seminal Chess sessions.

When Cotton eventually left the Muddy Waters Band in 1966 to strike out on his own, he secured a contract with Verve and recorded four albums for them. With the Muddy Waters Band on his resume, Cotton was able to cross over into the burgeoning blues-rock market of the day. For the next three decades and beyond, Cotton recorded on various labels and covered countless miles of road, bringing his mix of Delta and urban blues to the masses on a first-hand basis, staying true to his roots despite never ending shifts in music fashion.

Cotton signed with Alligator Records and in ‘84 released the successful “High Compression.” His next album, “Live From Chicago...Mr. Superharp Himself!,” came out in 1986 and was his second album on Alligator.

In 1987, Blind Pig released “Take Me Back,” an album that returned Cotton to his roots and earned a Grammy nomination.

After signing with the Verve label in ’94 and releasing ”Living the Blues,” Cotton was awarded a Grammy for the 1996 album, “Deep in the Blues.”

“Baby, Don’t You Tear My Clothes,” was Cotton’s third solo release on the Telarc label. He joined the label in 2000 with the release of “Fire Down Under the Hill,” followed by “35th Anniversary Blues Jam,” two years later. In that time, he has also appeared on several blues compilations and tribute albums released on Telarc.

In 2010 Cotton released "Giant," for Alligator Records, and also celebrates his 66th year as a professional Bluesman. In June 2010, Cotton was honored at New York’s Lincoln Center, where his friends Hubert Sumlin, Pinetop Perkins, Taj Mahal, Shemekia Copeland and others paid tribute in an all-star concert. There James Cotton played to yet another sold-out venue, with fans cheering the man known worldwide as “Mr. Superharp,” an undisputed giant of the blues..

James Cotton in Concert at Shalin Liu Performance Center in Rockport on... 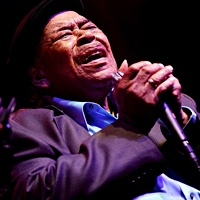 All About Jazz musician pages are maintained by musicians, publicists and trusted members like you. Interested? Tell us why you would like to improve the James Cotton musician page.