Blues music has had its individualist performers with powerful, poetic feeling, tremendous instrumental virtuosity, or a unique sound. But if the tradition ever had its Everyman, it would be Jimmy Reed, the most popular Chicago blues performer of the 1950s and early 1960s.

Jimmy Reed had a guitar technique that rarely varied, and his vocals were relaxed to the point where hearers couldn't always understand the words he sang. Yet Reed found a groove and stuck to it, creating a sound that any blues fan could identify after hearing only a few seconds of his music. That sound, moreover, influenced nearly every rock music ensemble that had a blues element in its style. Reed's music distilled the essence of the blues.

Reed's life followed a course outwardly similar to those of many other Chicago bluesmen. Mathis James Reed was born in the Mississippi River Delta, in or near Leland, Mississippi, on September 6, 1925, and he and his nine siblings grew up working the fields on a sharecroppers' plantation. Reed and his childhood friend Eddie Taylor, who would later play in Reed's band, taught themselves to play the guitar and harmonica whenever they could get away from farm work. But Reed's main musical activity when he was young consisted of singing in church choirs. Reed dropped out of school in his early teens to work the fields full time in nearby Duncan and Meltonia, Mississippi.

The entry of the United States into World War II brought news of factory jobs in Chicago to the Delta, and Reed followed countless other young people northward. But after a short time in Chicago he was drafted into the Navy himself. After his discharge in 1945 he returned to Mississippi, where he married and, with his wife Mary, raised a family of eight children. Mary, who would become known as "Mama" Reed, would go on to compose many of his most popular songs. By 1948 the couple was living in Gary, Indiana, and Reed was working in a steel mill. Later he worked as a butcher at the Armour Corporation's meatpacking plant.

After the experience of living in Chicago, however, Reed had become more and more interested in playing the guitar. Reed bought an electric guitar and amplifier and began practicing in the alley behind his house. He honed his style by recording his own sessions on blank 78 rpm discs with a crude recording machine and listening critically to the results.

Soon Reed was playing for substantial tips on the streets with washtub bassist Willie Joe Duncan. He reunited with Taylor, and the two began playing in Chicago and Gary, Indiana, lounges. Reed began to think about joining the Windy City's growing blues recording scene and, with some newly acquired harmonica skills inspired by listening to the elder Sonny Boy Williamson, Reed cut some demonstration 78s. In 1953 he took them to the city's premier blues entrepreneur, Leonard Chess. Chess, to his later dismay, brushed Reed off, but Jimmy Bracken, whose wife Vivian Carter was a Gary, Indiana, disc jockey, overheard the audition. Bracken and Carter were planning to launch a new label, Vee Jay, whose name was formed by combining their initials, and they jumped at the chance to bring Reed into the studio.

Reed's languid, simple sound, with its roots still deep in the Delta, took a few years to sink in with blues listeners, and several Vee Jay releases went nowhere. But one evening in 1954, as Reed was coming home from work at Armour, he heard his recording "You Don't Have to Go" on the radio. "You Don't Have to Go," a "Mama" Reed composition, was a hit even overseas, and one Vee Jay Reed release after another began to reach the charts. Reed placed 18 singles in the Billboard rhythm-and-blues chart between 1955 and 1961, more than any other musician. Well in advance of the 1960s blues revival, Reed's records crossed over to white audiences, and 12 of his records made the pop charts. His single biggest hit was "Bright Lights, Big City" in 1961, but several other Reed releases became blues standards almost from their dates of release. "Big Boss Man," "Baby, What You Want Me to Do," and "Ain't That Lovin' You Baby" were universally known among blues listeners and fans, as well as among the white rock bands who began to emulate Chicago blues in the 1960s.

"There's simply no sound in the blues as easily digestible, accessible, instantly recognizable, and as easy to play and sing as the music of Jimmy Reed," noted Cub Koda of the All Music Guide. Reed enjoyed several more years on top after his string of hits ended, playing top venues like New York's Apollo Theater and even Carnegie Hall. But by the mid-1960s listeners had begun to tire of Reed's walking boogie woogie bass lines and brief harmonica interjections. The Vee Jay label hit hard times, and Reed proved unable to deal with the pressures of success. He sunk into alcoholism, which would eventually be his demise.

Reed's increasingly severe epileptic seizures were mistakenly chalked up to delirium tremens, the "shakes" that accompany long-term alcohol abuse. By 1969 he was forced to stop performing and check into a veterans' administration hospital in Downey, Illinois. Reed continued to record, with Taylor or his wife giving him cues as to what words he should sing or when to begin playing. He subsequently released several albums on the ABC- Bluesway label, but they were generally thought to be inferior to his work for Vee Jay.

In 1976 Reed went through an alcoholism treatment program and successfully quit drinking. Prospects seemed bright for a comeback in the blues festival scene, but Reed died in Oakland, California, from the effects of an epileptic seizure, on August 29, 1976. 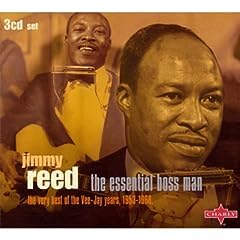 All About Jazz musician pages are maintained by musicians, publicists and trusted members like you. Interested? Tell us why you would like to improve the Jimmy Reed musician page.