Waters was born McKinley Morganfield in Issaquena County, Mississippi in 1913 (He later told people that he was born in 1915 in Rolling Fork, Mississippi; the reason for this remains unknown). His grandmother Della Grant raised him after his mother died in 1918. His fondness for playing in mud earned him his nickname at an early age. Waters started out on harmonica but by age seventeen he was playing the guitar at parties and “fish fries”, emulating two blues artists who were extremely popular in the south, Son House and Robert Johnson. “His thick heavy tone, the dark coloration of his voice and his firm almost stolid manner were all clearly derived from House,” wrote Peter Guralnick in Feel Like Going Home, “but the embellishments which he added, the imaginative slide technique and more agile rhythms, were closer to Johnson.”

In 1940 Waters moved to St. Louis before playing with Silas Green a year later and returning back to Mississippi. In the early part of the decade he ran a juke house, complete with gambling, moonshine, a jukebox and live music courtesy of Muddy himself. In the Summer of 1941 Alan Lomax came to Stovall, Mississippi, on behalf of the Library of Congress to record various country blues musicians. “He brought his stuff down and recorded me right in my house,” Waters recalled in Rolling Stone, “and when he played back the first song I sounded just like anybody's records. Man, you don't know how I felt that Saturday afternoon when I heard that voice and it was my own voice. Later on he sent me two copies of the pressing and a check for twenty bucks, and I carried that record up to the corner and put it on the jukebox. Just played it and played it and said, `I can do it, I can do it.'” Lomax came back again in July of 1942 to record Waters again. Both sessions were eventually released as Down On Stovall's Plantation on the Testament label.

In 1943 Waters headed north to Chicago in hopes of becoming a full-time professional. He lived with a relative for a short period while driving a truck and working in a factory by day and playing at night. Big Bill Broonzy was the leading bluesman in Chicago until his death in 1958 and the city was a very competitive market for a newcomer to become established. Broonzy helped Waters out by letting him open Broonzy's show in the rowdy clubs. In 1945 Waters's uncle gave him his first electric guitar, which enabled him to be heard above the noisy crowds. In 1946 Waters recorded some tunes for Mayo Williams at Columbia but they were never released. Later that year he began recording for Aristocrat, a newly- formed label run by two brothers, Leonard Chess and Phil Chess. In 1947 Waters played guitar with Sunnyland Slim on piano on the cuts “Gypsy Woman” and “Little Anna Mae.” These were also shelved, but in 1948 Waters's “I Can't Be Satisfied” and “I Feel Like Going Home” became big and his popularity in clubs began to take off. Soon after, Aristocrat changed their name to Chess and Waters's signature tune, “Rollin' Stone”, became a smash hit.

The Chess brothers would not allow Waters to use his own musicians (Jimmy Rogers and Blue Smitty) in the studio; instead he was only provided with a backing bass by Big Crawford. However, by 1950 Waters was recording with perhaps the best blues group ever: Little Walter Jacobs on harmonica; Jimmy Rogers on guitar; Elgin Evans on drums; Otis Spann on piano; Big Crawford on bass; and Waters handling vocals and slide guitar. The band recorded a string of blues classics during the early 1950s with the help of bassist/songwriter Willie Dixon. “Hoochie Coochie Man” (Number 8 on the R&B charts), “I Just Want To Make Love To You” (Number 4), and “I'm Ready”. These three were “the most macho songs in his repertoire,” wrote Robert Palmer in Rolling Stone. “Muddy would never have composed anything so unsubtle. But they gave him a succession of showstoppers and an image, which were important for a bluesman trying to break out of the grind of local gigs into national prominence.”

Waters reigned over the 1950s Chicago blues scene; he was its most popular artist and led its tightest band, fueled by hits from Willie Dixon, its strongest composer. On all these fronts, however, Waters contended with fierce competition from the gravel-voiced singer Howlin' Wolf. Wolf's band rivaled Water's all-star lineup, notably featuring the now-legendary guitarist Hubert Sumlin. Wolf also competed with Waters for the songwriting attention of Willie Dixon and recorded a large number of Dixon tunes. Nonetheless, Waters consistently retained an edge in popularity and esteem. Both Waters and Wolf are held in immense regard by modern rock and blues aficionados, but Waters is generally considered to be the more influential artist.[citation needed]

By the early 1950s, Waters was at the height of his career. “By the time he achieved his popular peak, Muddy Waters had become a shouting, declamatory kind of singer who had forsaken his guitar as a kind of anachronism and whose band played with a single pulsating rhythm,” wrote Guralnick in his Listener's Guide.

Waters's success as the frontman led others in his group to seek the same recognition. In 1953 Little Walter left when his single “Juke” became a hit and in 1955 Rogers quit to form his own band. Waters could never recapture the glory of his pre-1956 years as the pressures of being a leader led him to use various studio musicians for quite a few years thereafter.

He headed to England in 1958 and shocked his overseas audiences with loud, amplified electric guitar and a thunderous beat. When R&B began to die down shortly after, Waters switched back to his older style of country blues. His gig at the Newport Jazz Festival in 1960 (see At Newport 1960) turned on a whole new generation to Waters's Delta sound. After which English musicians of the likes of Eric Clapton and the Rolling Stones expressed a fondness for the new sound, Waters switched back to electric circa 1964. Thereupon expressing anger when he felt that members of his own race were turning their backs to the genre while a Caucasian audience had shown increasing respect for the blues.

However, for the better part of twenty years (since his last big hit in 1956, “I'm Ready”) Waters was put on the back shelf by the Chess label and recorded albums with various “popular” themes: Brass And The Blues, Electric Mud, etc. In 1972 he went back to England to record The London Muddy Waters Sessions with four hotshot rockers•Rory Gallagher, Steve Winwood, Rick Grech, and Mitch Mitchell • but their playing wasn't up to his standards. “These boys are top musicians, they can play with me, put the book before 'em and play it, you know,” he told Guralnick. “But that ain't what I need to sell my people, it ain't the Muddy Waters sound. An if you change my sound, then you gonna change the whole man.”

Waters sound was basically Delta country blues electrified, but his use of microtones, in both his vocals and slide playing, made it extremely difficult to duplicate and follow correctly. “When I plays onstage with my band, I have to get in there with my guitar and try to bring the sound down to me,” he said in Rolling Stone. “But no sooner than I quit playing, it goes back to another, different sound. My blues look so simple, so easy to do, but it's not. They say my blues is the hardest blues in the world to play.”

In 1977 Johnny Winter convinced his label, Blue Sky, to sign Waters and the beginning of a fruitful partnership was begun. Waters's “comeback” LP, Hard Again, was recorded in just two days and was as close to the original Chicago sound he had created as anyone could ever hope for. Winter produced/played and pushed Waters to his limit. Former Waters sideman James Cotton contributed harmonica on the Grammy Award-winning album and a brief but well received tour followed. “He sounds happy, energetic and out for business,” stated Dan Oppenheimer in Rolling Stone. “In short, Muddy Waters is kicking in another mule's stall.”

In 1978 Winter recruited Walter Horton and Jimmy Rogers to help out on Waters's I'm Ready LP duplicating the critical and commercial success of Hard Again. The comeback continued in 1979 with the lauded LP Muddy “Mississippi” Waters Live. “Muddy was loose for this one,” wrote Jas Obrecht in Guitar Player, “and the result is the next best thing to being ringside at one of his foot- thumping, head-nodding, downhome blues shows.” King Bee the following year concluded Water's reign at Blue Sky and all four LPs turned out to be his biggest-selling albums ever.

In 1983 Waters died in his sleep, aged 70. At his funeral, throngs of blues musicians showed up to pay tribute to one of the true originals of the art form. “Muddy was a master of just the right notes,” John Hammond Jr., told Guitar World. “It was profound guitar playing, deep and simple. . . . more country blues transposed to the electric guitar, the kind of playing that enhanced the lyrics, gave profundity to the words themselves.” Two years after his death, the city that made Muddy Waters (and vice versa) honored their father by changing the name of 43rd Street to Muddy Waters Drive. Following Waters's death, B.B. King told Guitar World, “It's going to be years and years before most people realize how great he was to American music.”

"MUDDY" - A Picture Book about Muddy Watters is now available from... 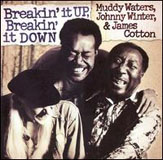 All About Jazz musician pages are maintained by musicians, publicists and trusted members like you. Interested? Tell us why you would like to improve the Muddy Waters musician page.