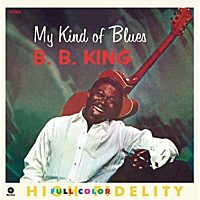 slideshow
It was bitter cold in 2011 as I waited for B.B. King's two tour buses to arrive at the Independence Events Center just outside of Kansas City. It was early January and one of those florescent late afternoons where everything seems to be in black and white and the sun takes a slide at 3:30. When the coaches arrived, one snuggled up next to the building's stage ramp while the other hooked left into the parking lot. A few minutes later, the door of the first bus released its airlock and swung open. A gentleman in a suit and tie leaned out. “Marc? You're here to see the Boss, right?" I had flown out to Kansas City to interview B.B. for The Wall Street Journal (go here).

For the next hour, I sat with B.B. in the back of his bus, in what can only be called a high-tech den. We talked about the blues, jazz, the road and why he toured so much at his age. We also listened to all kinds of music, as B.B. showed off his jukebox stereo system, which was like a combination iTunes and a theater system. Images of album and DVD covers could be brought up on a large screen, allowing B.B. to choose from the menu using a remote.

What I found remarkable about B.B. was his voice and kindness. His voice was lyrical, as if he had a musical instrument in his throat. His generosity and warmth also were unmatched. Each time I was ready to vacate, he urged me to remain a few more minutes more as he talked about Count Basie's time and Kansas City jazz. In fact, we had so much fun talking about music that his road manager knocked several times on the door urging B.B. to get ready for the show. I finally insisted, and he asked if I was going to stick around and see the show. Of course, I said.

Out in the arena, a converted hockey rink, B.B. went to work, laying the blues on a largely white audience. Remarkably, B.B.'s storytelling songs, narrated in a forceful singing voice punctuated by his sobbing electric guitar, transcended race. No matter who you were that evening, you had B.B.'s blues and understood everything he was singing about. The blues are like that. Now, as I look up from writing this, I see I still have my backstage credentials from that evening. Still tucked into the plastic sleeve was the plastic guitar pick B.B. gave me and probably gave all writers who had the good fortune to spend time in his rolling den. I'll miss B.B., King of the Road.

JazzWax tracks: When I transcribed my tape in 2011, this gem of a quote popped out: “Most people think my favorite album is Live at the Regal [1965], which critics love. It's good, but it's not my favorite. My favorite is My Kind of Blues [1961]. No one liked it but me [laughs]. I still love it today." Both are perfect starters. You'll find My Kind of Blues here and Live at the Regal here.

John Coltrane in 1966. Here's a taped interview with tenor saxophonist John Coltrane conducted by Frank Kofsky in 1966, with animation added by Patrick Smith. For more interviews animated by Smith, go here. Special thanks to assistant producer Jessie Wright-Mendoza for sending this along...

Oddball album cover of the week.

In Los Angeles of the 1950s, it was customary for young men who wanted to show their affection to kiss the high cheekbone of a girlfriend while laying their nostrils on her eye.