A genial and prolific musician, Fats Domino was the most commercially successful of a long line of New Orleans rhythm-and- blues pianists and vocal performers. Coming to prominence at the dawn of rock and roll in the middle 1950s, Domino is often named as one of that music's originators and classic figures. He was a gifted and entirely self-taught composer who parlayed his multiple talents into a long period of popularity with music fans of all races, and he stands perhaps as the most enthusiastic exponent of the Crescent City's great musical tradition.

Fats Domino was born Antoine Domino on February 26, 1928, in New Orleans, one of nine children. His father played the violin, and a relative, Harrison Verrett, was a well-known New Orleans guitarist who would later become a fixture of Fats's band. Verrett taught him to play the piano at the age of nine by means of instructional marks written on a piano's keys, and within a few years Domino immersed himself in music, quitting school at age 14 to work by day and play piano in the city's bars and small clubs by night. At some time during his early career, his five-foot-five-inch, two-hundred-pound frame gave rise to the nickname "Fats."

Domino cut his teeth as a performer in the midst of rich pianistic and vocal traditions; he likely heard and performed with such legends as Professor Longhair and Amos Milburn as a young man. He mastered a variety of piano styles, developed an infectious vocal style that avoided the hard-edged intensity of some of his bluesier contemporaries, and began to write songs. By 1949 he had a regular slot at a club called the Hideaway, where the influential New Orleans trumpeter, bandleader, and composer Dave Bartholomew heard Domino play a blues of his own creation called "The Fat Man": the lyric opened with the lines, "They call me the Fat Man/'Cause I weigh two hundred pounds." Bartholomew had connections with the fast-growing independent West Coast record label Imperial, and the two musicians recorded Bartholomew's arrangement of "The Fat Man" in 1950. By 1953 it was claimed to have sold one million copies.

Domino followed up "The Fat Man" with a string of other rhythm-and-blues hits, including "Rockin' Chair," "Please Don't Leave Me," and "Goin' Home," which reached number one on rhythm-and-blues charts in 1952. When the rock and roll phenomenon exploded in 1955 with the introduction of Elvis Presley and Chuck Berry to a mass audience, Imperial was ready with its own star. It was no surprise that Domino's "Ain't That a Shame" went to the number 16 position on the pop charts in 1955. "I'm in Love Again" and "Blueberry Hill" did even better on the pop charts the following year, reaching the pop Top Ten. For the next seven years Domino enjoyed a long string of hits that reached high chart levels. Many of them—- "I'm Walkin'," "Walkin' to New Orleans," and "I Want to Walk You Home" among them—-are among rock and roll's canon of classics, part of the repertoire of many a cover band.

"Ain't That a Shame" offers a good example of the style that made Domino so popular. The structure is based on rhythmic figures simple enough to be instantly memorable, yet subtle in the way that only the Caribbean- leaning musicians of New Orleans could make them, the song showcased Domino's pleasant Louisiana drawl. Its refrain ("Ain't that a shame—my tears fell like rain ...") offered a hint of rueful humor and a romantic theme that avoided the raw sexuality present in the lyrics of some of Domino's contemporaries. Bartholomew's arrangement displayed the tight horn section of Domino's talented band to maximum advantage.

The creative partnership of Domino and Bartholomew deserves notice in the realm of composition as well, for the pair wrote virtually all of Domino's major hits. Domino never learned to read music, and into the 1980s Bartholomew was still closely involved in his career.

Domino's string of hits was brought to an end by the influx of British rock music that began with the Beatles in 1963 and 1964, and by the innovations of American black musicians who responded to the "British Invasion" with creative new styles in such centers as Detroit and Memphis. He returned briefly to the public eye with a cover of the Beatles' "Lady Madonna" in 1968, but otherwise contented himself with indefatigable touring; his performances were notable for the way they kept to Domino's original style and sound, offering listeners a glimpse of his New Orleans-based music in its purest form. He became a successful fixture of Nevada's casinos, toured Europe (where he had always enjoyed immense popularity) several times in the late 1970s and 1980s, and in 1993 released a holiday album, “Christmas Is a Special Day.” He claimed that he was not making a comeback, since he had never stopped performing.

Few musicians have made good music sound so easy, so effortless as Fats, and that's best appreciated in an exhaustive compilation, such as the box set “Walking to New Orleans,” (EMI 2002) because the sheer scope of Fats' accomplishment becomes stunning only at this scale. Sure, it's easy to appreciate the brilliance of Domino on a hits collection, but the true scope of his accomplishments becomes clear on a set like this, since there's not a bad cut among these 100 tracks. This is a compilation of his legendary Imperial recordings.

Fats Domino in 2005 rose again to international prominence in the wake of hurricane Katrina. He refused to leave his home in the Lower Ninth Ward of New Orleans and was listed as missing and presumed dead. He was rescued and sent to a shelter and was reunited with his family, but lost everything in his home. But Fats would come back.

Fats Domino was the first artist to be announced as scheduled to perform at the 2006 Jazz & Heritage Festival, although he was too ill to perform and was only able to offer the audience an on-stage greeting. Domino also released an album “Alive and Kickin'” in early 2006 to benefit the Tipitina's Foundation, which supports indigent local musicians.

Fats Domino returned to stage on May 19th, 2007 at Tipitina's at New Orleans performing to a full house. A foundation has been formed and a show is being planned for Domino and the restoration of his home.A double cd "Goin' Home A Tribute to Fats Domino," was released the same year, with proceeds going to assist Fats.

Fats Domino is a Living Legend! There is a life sized statue of him in the French Quarter of New Orleans, where he is acknowledged and respected for his contribution to music for over half a century.

Goin' Home: An Evening Honoring Fats Domino and the Music of New Orleans 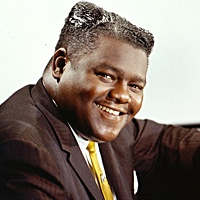 All About Jazz musician pages are maintained by musicians, publicists and trusted members like you. Interested? Tell us why you would like to improve the Fats Domino musician page.