Smiley Lewis was one of the big R&B stars to come out New Orleans in the 1950’s. Born in DeQuincey, Louisiana, with the given name of Overton Lemons, he moved to New Orleans in his mid-teens, equipped with a big, booming voice and some guitar skills. he played clubs in the French Quarter, often with pianist Tuts Washington (and sometimes billed as "Smiling" Lewis). By 1947, his following was strong enough to merit a session for DeLuxe Records, which issued his debut 78, “Here Comes Smiley.” Then Lewis signed with Imperial in 1950, debuting with Tee-Nah-Nah and things began to move.

As the New Orleans R&B sound developed rapidly during the early 1950s, so did Lewis, as he rocked ever harder on “Lillie Mae,” “Ain't Gonna Do It,” and “Big Mamou.” He scored his first national hit in 1952 with “The Bells Are Ringing,” and enjoyed his biggest sales in 1955 with “I Hear You Knocking.” Other classic songs from Lewis were “Bumpity Bump,” “Down the Road,” “Lost Weekend,” “Real Gone Lover,” ”She's Got Me Hook, Line and Sinker,” and” Rootin' and Tootin'.” In front of the Crescent City's hottest players, Lewis roared like a lion. Strangely, Fats Domino fared better with some of Smiley Lewis' tunes than Lewis did ("Blue Monday," and “I Hear You Knocking” in particular).

Similarly, Elvis Presley cleaned up the naughty "One Night" and hit big with it, but Lewis's original had already done well in 1956, as had “Please Listen to Me.” His blistering “Shame, Shame, Shame” found its way onto the soundtrack of the steamy Hollywood film “Baby Doll” in 1957. After a long and at least semi-profitable run at Imperial records, Lewis moved over to OKeh in 1961 for one single, and was with Dot in 1964 leaving with an Allen Toussaint-produced remake of “The Bells Are Ringing for Loma” in 1965. By then, stomach cancer was taking over and he died on October 7, 1966 in New Orleans, all but forgotten outside his Big Easy home base. The ensuing decades have brought back much of his music to a new audience. 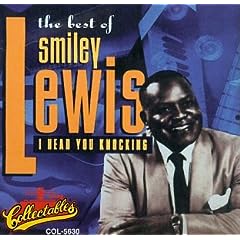 All About Jazz musician pages are maintained by musicians, publicists and trusted members like you. Interested? Tell us why you would like to improve the Smiley Lewis musician page.