In addition to being one of our greatest American singer- songwriters and film composers, Newman long ago established himself among our sharpest and most caustic wits. Calling his inspired new album The Randy Newman Songbook, Vol. I seems like a curiously upbeat and straightforward act for this frequently wry fellow. "Yeah, it's not my style to look ahead with confidence," Newman confesses. "I'm basically asking for it with a title like that. Come to think of it, I could have called it something safer and more horrible like Looking Back At My Life, but I just didn't give it that much thought."

If it's not Newman's style to look forward with optimism, it's also not his personal preference to look back, whether in anger or in any other emotion. Yet somehow he still does so brilliantly on The Randy Newman Songbook, Vol. I, his illuminating first effort for the Nonesuch label. The eighteen-song set finds Newman singing and playing piano on powerful new solo versions of his early classics ("I Think It's Going To Rain Today," "Sail Away," "You Can Leave Your Hat On"), his more recent gems ("The World Isn't Fair," "The Great Nations of Europe") as well as a few examples of the Oscar-winning composer's film music (themes from Avalon and Ragtime, as well as "When She Loved Me" from Toy Story 2) and even a favorite stray obscurity ("Let Me Go," a song originally written for the 1972 Norman Lear movie The Pursuit of Happiness).

The resulting album is an intimate and powerful reminder of the enduring work that has established Newman as a songwriter's songwriter -- one of the most musically and lyrically ambitious singer- songwriters ever to be at play in the fields of popular music. Characteristically, Newman offers no hype. "This was something I did at the behest of the record company really," Newman explains matter of factly. "It wasn't something I would have thought to do necessarily -- memorialize my own songs. It's kind of interesting to me to do this project because it does play to history in a way, but in truth that's not as interesting to me personally as new stuff. I like writing new songs, though frankly I don't do that too much either. See I know these songs already but to do them in this way is not a bad thing. It's nice, actually."

"Nice" really understates matters considerably. In a very real sense The Randy Newman Songbook, Vol. 1 can be seen as the album of a lifetime. Here is Newman at the height of his musical powers working with producer Mitchell Froom -- well-known for his work with Los Lobos, Richard Thompson and Elvis Costello, among others -- to rerecord many of his finest and most lasting compositions. Newman and Froom cut thirty tracks to arrive at the final eighteen here. Even Newman was surprised at some songs that made the cut and others that did not. "Surprisingly, I always love playing 'Davy The Fat Boy' or 'Same Girl,' and they didn't make the album. While 'Louisiana 1927' doesn't interest me in playing it much, and yet these really were the songs that worked best. Some others could have been on here and weren't. We could have put 'I Love L.A.' or 'Emotional Girl' -- and if we sell enough to break even and there is a Vol. 2, we will."

On The Randy Newman Songbook, Vol. 1, the artfully minimal and budgetarily-responsible stripped- down approach works wonderfully, with even Newman's most familiar material here appearing in a fresh, flattering light. The result is perhaps the purest distillation of the intelligent and unflinching artistry that makes Newman so unique and so worthy of such a serious retrospective. Rather than presenting the songs chronologically, Newman and Froom have sequenced them to make the album work as a musical whole. At times, The Randy Newman Songbook, Vol. 1 feels like a thematic song cycle. Towards the end, for instance, the sequence of "Sail Away," "The World Isn't Fair," "Political Science," "The Great Nations of Europe" and "In Germany Before The War" all together add up to something more than the already considerable sum of their individual parts. "Yeah, it's sort of the political section, if you'll excuse the expression," Newman says with a laugh.

Throughout The Randy Newman Songbook, Vol. 1, Newman's own piano playing is so sensitive and tasteful that the performances feel utterly complete. So how does Newman rank himself here as his only accompanist? "I had some complaints about his playing but not too many," he answers deadpan. Actually, Newman will admit to trace elements of pride regarding his fine vocals here. "It's all about practice -- just having done it for so long," he explains. "Thankfully, Mitchell suggested a number of key changes so I wasn't croaking at people on songs like 'Marie' and 'Living Without You.' I think I sing better now which is one of the reasons I didn't mind doing this album. Singing's the kind of thing you get better at until you start your irrevocable decline. Now I have scheduled my irrevocable decline, but it's not for another couple of years."

So before the inevitable rot sets in, Randy Newman's own Songbook -- call it Newman Sings Newman, if it makes you feel better -- remains a winning and fitting way to celebrate or simply catch up with one of modern music's most compelling and distinctive careers.

Newman was born on November 28, 1943 into a famously musical family -- his uncles Alfred, Lionel and Emil were all well-respected film composers and conductors. Even Randy's father Irving Newman - - a prominent physician -- wrote a song for Bing Crosby. Perhaps then it's no surprise that at seventeen Randy Newman was already a professional songwriter in own right, knocking out tunes for a Los Angeles publishing house. When his longtime friend Lenny Waronker helped Newman get a recording contract with Reprise Records, Newman dropped out of UCLA where he was studying music and one semester short of graduation. His orchestral 1968 debut Randy Newman was a slow seller -- later something of a Newman tradition -- but before long Newman's extraordinary and eclectic compositions were being recorded by an unusually wide range of artists, from Pat Boone to Ray Charles, Peggy Lee to Wilson Pickett.

Critics rightly raved about Newman's 1970 sophomore effort 12 Songs, and increasingly the public started to take notice with albums like 1970's Live (like Songbook, an opportunity to hear Newman playing alone), and even more so with 1972's classic Sail Away and 1974's brilliant and controversial Good Old Boys. Critics were struck by his musical depth and the literary quality and edge of his character-oriented lyrics.

With 1977's Top Ten Little Criminals, Newman experienced a huge left-field smash in the unlikely form of "Short People?" - a rare, strange and at times uncomfortable brush with full-blown pop stardom for Newman. Less surprisingly, Newman soon managed to successfully slow any annoying career momentum with 1979's Born Again -- a decidedly barbed piece of work which pictured Newman on the cover in Kiss-styled make-up with a dollar sign on his face. How fitting for a dark piece of work that features "It's Money That I Love," a memorable comment on runaway capitalism that's now reprised on The Randy Newman Songbook, Vol. 1.

In the Eighties, Newman was dividing his time between film composing and recording his own albums, with the former work seemingly making the later efforts increasingly infrequent. In 1981, Newman released his exquisite score for Milos Forman's adaptation of E.L. Doctrow's Ragtime -- earning him his first two of sixteen Oscar nominations for Best Score and Best Song. 1983 saw the release of Trouble In Paradise, while the next year saw the release of Newman's Grammy-winning, Oscar-nominated score for The Natural. Following some more film work, Newman finally got around to recording another studio album. 1988's Land of Dreams was another breakthrough work marked by some of Newman's most personal and powerful work yet.

In the Nineties, Newman enjoyed massive success with his film work, as well as winning a 1990 Emmy for his music in the pilot of Cop Rock. Amusingly and surprisingly to many longtime fans, the cutting social critic and sometime brilliant curmudgeon somehow found himself becoming a beloved children's entertainer thanks to his outstanding music for films like 1995's Toy Story, 1996's James and the Giant Peach, 1997's Cats Don't Dance, 1998's Bug's Life and 1999's Toy Story 2. Newman won three more Grammys for his work on A Bug's Life, Toy Story 2 and Monsters, Inc. Still, Newman also managed to play to the adult audience as well with his darkly hilarious take on Faust -- the 1995 recording of which included performances by Don Henley, Elton John, Bonnie Raitt, Linda Ronstadt and James Taylor. Towards the end of the decade, Newman put out an impressive four-CD compilation, 1998's Guilty: 30 Years of Randy Newman and a strong new album for DreamWorks, 1999's Bad Love, Newman's first collaboration with Mitchell Froom.

In 2002, Newman finally won his first Oscar for "If I Didn't Have You?" from Monsters Inc. "The impact of the Oscar lasted about a day and a half," Newman says humbly. "Actually, now I'm getting these memorial awards now maybe more than I did. I just got the NARAS Governors Award and whatever the hell else they want to give me. I don't know that it's changed anything so much. It's really getting a reward for a minor kind of work of mine. It's not one of my best songs, but that's the way those things work. When I die, it will say 'Oscar-winner' in my obit, but then again every one of the songs on this album is better than that one."

This album -- The Randy Newman Songbook, Vol. 1 -- will be his first for Nonesuch. "It is an artier label," Newman notes. "I was speaking to some group and said, 'I think you have to learn the lute to be on Nonesuch.' But the thing is I believe they'll do a better job for me commercially. They'll pay more attention and sell more records for me. That's of interest to me, and the fact that they have a really interesting roster list. If I decide to write for them or use them musically in some way, they're around. Ultimately, I want reach more people. That's what I've intended all my life even though it may not seem that way."

So if The Randy Newman Songbook, Vol. 1 happens to cement Newman's place in the pop pantheon as its sells, Newman will just have to grin and bear it. "It bothers me if people think it's presumptuous to put yourself forward and demand that sort of comparison," he admits. "But I'm interested in how people hear this album. And it's not an unrepresentative bunch of songs. It's not necessarily the best of them, but it's good enough. We did em and we did em pretty well."

Randy Newman is more than a mere master of understatement -- he is one of the real masters of modern American music. Put on The Randy Newman Songbook, Vol. 1 and take a listen to a master at work. Show less

Vocalist Roseanna Vitro Debuts on Motema Music with "The Music of Randy...

The Princess And The... 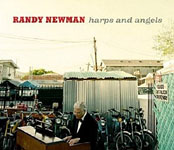 All About Jazz musician pages are maintained by musicians, publicists and trusted members like you. Interested? Tell us why you would like to improve the Lyle Lovett musician page.