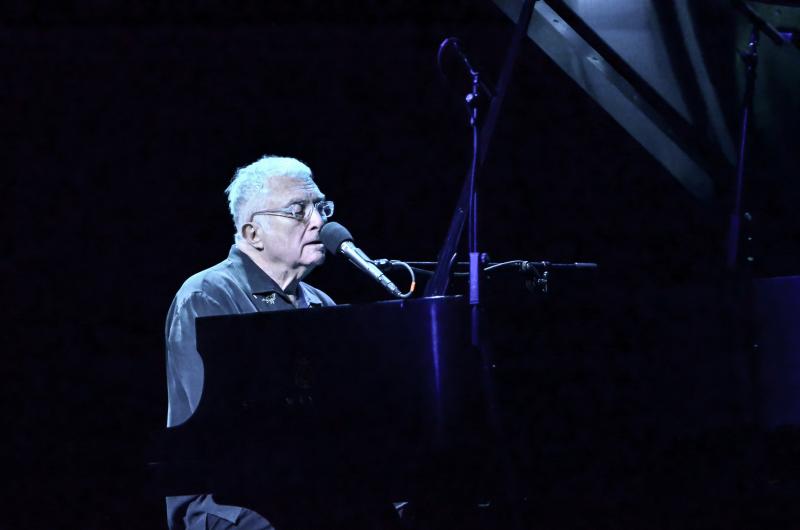 Satire is defined as the use of humor, irony, exaggeration, or ridicule to expose and criticize people's stupidity or vices, particularly in the context of contemporary politics and other topical issues. For the modern world, perhaps satire might best be defined simply and eloquently as—a Randy Newman song.

The Oscar, Emmy and Grammy winning songwriter and composer, best-known for his 1977 hit "Short People" (a song dripping with irony, which was, at the time, completely misunderstood) injects the flawed and misanthropic characters that inhabit his witty, clever songs with a poignant, twisted worldview that make the Fascists look like a progressive liberal reformers.

On a cool evening in early April 2016, Newman made a rare New York area concert appearance at the Space in Westbury (Long Island). The almost 90-year-old structure was formerly the Westbury Movie Theater. After a renovation, that saw the installation of a state of the art sound and lighting systems along with flexible seating configurations, the Westbury Theater became the Space at Westbury. On this evening the auditorium was configured to accommodate patrons seated in orchestra as well as loge and balcony. Prior to the performance, the mostly middle-aged crowd milled about the venue wondering just what Newman would be playing.

That question was answered quickly when the bespectacled Newman bounded onto the stage dressed in comfortable jeans a short-sleeved shirt and sneakers. Getting right down to it with the theme from the TV show Monk, also known as "It's A Jungle Out There." The witty and humorous song about the obsessive-compulsive detective immediately got the audience into a festive mood. This was highlighted when the singer lost his place in the song, messed up the lyric and stated, "Where the fuck am I? Oh, there I am." At this point both Newman and the audience chuckled.

What followed was another thirty-nine songs that took the adoring crowd on a trip through the psyche and career of one of America's most prolific songwriters. The audience which appeared to be filled with die-hard fans got exactly what it came for—an evening of slightly off-kilter bluesy, jazzy, pop and rock.

Almost every song was introduced with a poignant and/or funny story. The Academy Award winning "You Got A Friend In Me" (from Toy Story) was preceded with a story about Disney and Pixar executives and how they thought he was stupid. Prior to "God's Song (That's Why I Love Mankind)" Newman deadpanned that "it is a song from a higher authority from which God will speak through me. I am as surprised as you are." Following "She Chose Me" Newman said, "I wrote that a while ago, but I was too good looking until recently to do it."

Just prior to intermission before he played "Political Science" the Rock N Roll Hall Of Famer (he was inducted in 2013) delivered one of the best set-ending quips ever uttered, saying, "I'll do one more. Then I'll shoot up, and have a drink. And then I'll be back for the rest of the show." Additional highlights of the first set included: "The Putin Man," "Birmingham," "Short People," "Marie," "The World Isn't Fair," "My Life Is Good," "You Can Leave Your Hat On" (a song Newman wrote, but is most-often associated with Joe Cocker) and the audience participation anthem "I'm Dead But I Don't Know It."

As he ambled out to center stage for the second set, the audience applauded and Newman said. "Thank you. Thanks for coming back." Set two opened with "Its Money That I Love" and featured "Red Bandana" and "Dixie Flyer" from 1988's Land Of Dreams (Reprise Records), "Mama Told Me Not To Come" (another Newman-penned song made famous by another artist, in this case Three Dog Night), "Sail Away," "Real Emotional Girl," "I Love L.A." and "Louisiana 1927" (a ballad about a Louisiana flood that took on a newer meaning after Hurricane Katrina decimated New Orleans).

Newman was in an extremely playful mood. His droll humor continued to show itself throughout the evening. "Germany Before The War" was introduced as "a song about a murderer." When he said to himself, "What should I play?," an audience member shouted, "'Simon Smith And His Amazing Dancing Bear!'" Newman quickly said, "Okay" and to the delight of the audience member, played the song. "Shame," a song about a desperate, randy and older sugar daddy character and his younger but not necessarily naive paramour, featured the audience participation sing-a-long of "shame, shame, shame" after each verse. Later in the evening, Newman turned to the crowd and said, "It's my manager, Kathy's, birthday tomorrow. Do you mind singing 'Happy Birthday' to her?" The crowd wholeheartedly applauded its approval and joined Newman as he sang the traditional song.

The second set ended with an amazing heartfelt version of "Feels Like Home" from Harps & Angels (Nonesuch Records, 2008). The song originally appeared in Newman's musical Randy Newman's Faust (Reprise/Warner Brothers Records, 1995) and was sung by Bonnie Raitt. At the end of the song, Newman stood, thanked the crowd, waved and walked off. The audience stood and cheered hoping for an encore.

Newman did not disappoint. Returning to the stage he offered up stellar versions of "Lonely At The Top" with its

"You'd think I'd be happy
But I'm not
Everybody knows my name
But it's just a crazy game
Oh, it's lonely at the top"

lyric and the show-ending "I Think It's Going To Rain Today" from his self-titled album (Reprise Records, 1968). It was a fitting way to end the tour de force performance—with an album track from his debut album released almost 50 years prior.