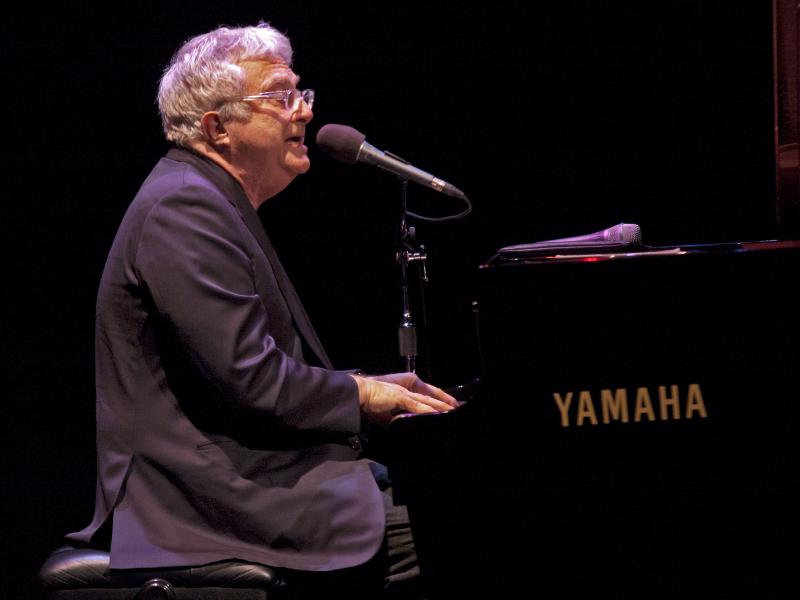 BY JOHN KELMAN
April 3, 2011
Sign in to view read count
Randy Newman
Centrepointe Theatre,
Ottawa, Canada
March 28, 2011
While it's not been the 25 years that he cited as the time that's passed since his last Ottawa performance—he was actually in town for the 2007 Ottawa Bluesfest—it was his first time playing in a theater setting in Ottawa since the mid-1980s, when he delivered a solo show in the Opera of the National Arts Centre in support of Trouble in Paradise (Reprise, 1983). Still, with the passing of time, and everything that goes along with it—baggage about which, amongst many other things, Newman, in his own inimitable fashion, has been passing comment, in a career now in its fifth decade—the singer/songwriter, who turns 70 in 2013, can be forgiven for a little senior's moment. Newman writes about the human condition, after all, and about the multitude of matters concerning life, love, politics, and pretty much anything else that the multifarious charms and peccadilloes of said condition impact, and he does so with a rare combination of astute personal awareness and a broad world view that makes his sometimes satiric, sometimes poignant, and occasionally downright painful songs resonate in ways that transcend time—and even the specific events that may have inspired him to put pen to paper in the first place.
While he joked, two songs into the first of two sets at Ottawa, Canada's 950-seat Centrepointe Theatre, that "I'm gonna play all my hits tonight; there's half of 'em," what become clear, as he worked his way through nearly forty songs in two hours—going right back to Randy Newman (Reprise, 1968) and straight through twelve solo albums and a slew of film soundtracks to Harps and Angels (Nonesuch, 2008)—was that Newman has contributed more than a handful of songs to the fabric of the last half century, songs that people may not know belong to him, but with which they're absolutely familiar. And it's not just because his songs have been hits for others, like Joe Cocker, Three Dog Night and Bonnie Raitt—in some cases losing the satire that drove them, but nevertheless making them truly iconic to a wider audience—it's a fact that few people in the First World will have escaped hearing songs like "Short People," from Little Criminals (Reprise, 1977) or the megahit, "I Love L.A.," from Trouble in Paradise.

Newman's recordings have always been a double-edged sword. When it comes to the arrangements/production, there have been plenty of hits: the Dixieland instrumentation on "Lonely at the Top," from his debut, couldn't have been better; and the same could be said for the more recent "I'm Dead (But I Don't Know It)," from Bad Love (Reprise, 1999), with its over-the-top rock posturing. But equally, there have been a fair share of misses, where over-slick production has marred the material. Newman rarely (if ever) tours with a group, and catching him in performance, one thing becomes immediately clear: a discography of nothing but solo recordings, with just voice and a piano, would have likely resulted in orders of magnitude fewer sales (at a time, of course, when sales actually were measured in orders of magnitude), but live, it's really the only way to experience him. As subtle as the orchestration is on "Bad News from Home," from Land of Dreams (Reprise, 1988), it still can't capture the stark pain of this song of infidelity uncovered, delivered with nothing but Newman's slowly unfolding arpeggios and a voice that's far from perfect, but, like Leonard Cohen, delivers the words with a deeper truth that few others can. And while it's hard not to be drawn in by the groove driving Little Criminals' "Baltimore," Newman's song about urban blight, even its note-perfect arrangement somehow dilutes the strength of Newman's words.

Not that all of the music Newman played was dark, and even amidst some of the weightier songs that populated the majority of the second set, a wry sense of humor prevailed. As Newman aggressively insisted "My Life is Good," he recounted a Hollywood lunch with Bruce Springsteen:

Oh, we talked about some kind of
woodblock or something
And this new guitar we like
And you know what he said to me
I'll tell you what he said to me
He said, "Rand, I'm tired
How would you like to be the Boss for awhile?"
Well yeah,
Blow big man, blow

The first set, while not any lighter-weight in subject matter—Newman delivering his take on European colonialism with "The Great Nations of Europe," a near-miss experience on "Harps and Angels" where God tells him "Lucky for you this ain't your time, someone very dear to me has made another clerical error," and distilling Karl Marx down to "The World Isn't Fair"—it was lighter in tone, as he encouraged the audience to help out on "I'm Dead (But I Don't Know It)," where he sang about the joys of a career longevity:

Throughout the two sets, Newman, in his usual dark suit on a stage with nothing more than a grand piano and minimal lighting, delivered his relaxed introductions with the timing of a seasoned comedian. Talking about "The Girls in My Life," he recounted how his wife of two boys and a girl told him, "If I'd had the girl first I'd have thought the boys were retarded," though he did have a chance to get back at her with "I Miss You," "a love song I wrote for my first wife...while married to my second." Self-deprecation was equally intact, as he described writing "the beginning a song cycle like Schubert's, only crappier; it made me laugh, when I thought of Schubert, and how I'd lived twice as long....quite a waste, really." After the applause for "Short People" died down, he quipped, "There aren't any short people in this country, but I'm glad to hear you feel that way." 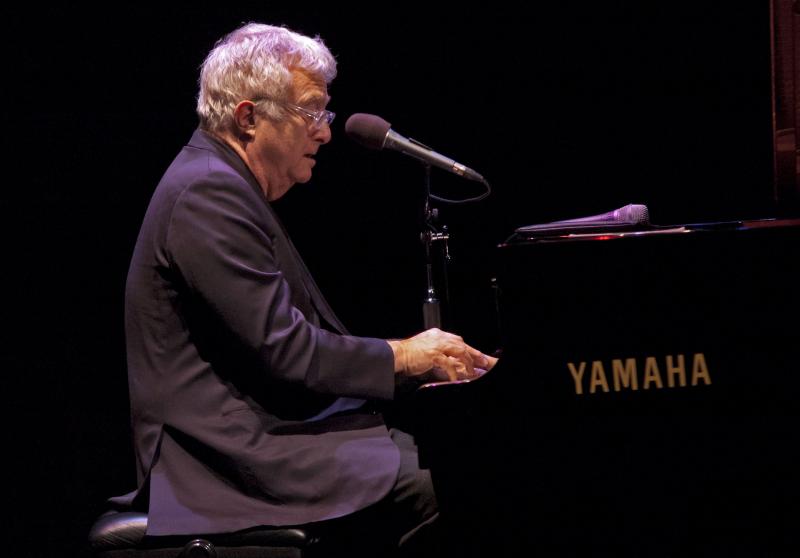 The near-capacity crowd—a surprisingly broad cross-section of age and gender, making clear that Newman's lost none of his appeal—was largely familiar with almost every song he played, whether it was classic material like "Sail Away," "Louisiana 1927," "Guilty" or" You Can Leave Your Hat On," or newer material like "Red Bandana," "Dixie Flyer" or ""Laugh and Be Happy." Without the benefit of the album arrangements, Newman's solo renditions were often unexpectedly short, sometimes seeming to end almost mid-sentence. But in every case, the delivery was perfect, as Newman proved that it's possible to be a writer of substance, while relying on the sparest, most economical prose, like on "Love Story," where the most mundane life actually seems pretty darn sweet.

A couple of short encores and, with Newman taking a few moments to shake hands with a couple of front-row fans, it was all over. In many ways, not a lot has changed since his 1983 show: one man, one piano and a gradually growing repertoire that get to the heart of the human condition with simple statements of truth and no excess, no self-aggrandizing, and no "look-at-me" posturing. With the follow-up to The Randy Newman Songbook, Vol. 1 (Nonesuch, 2003)—the piano/voice solo album he'd resisted for most of his career—due out in May, Newman's Ottawa show was the perfect preview. Hopefully he'll come back a little sooner next time...or, at least, sooner than he can remember.