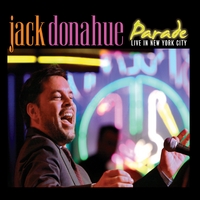 Parade is an odd name for an album that's largely built on material of a subtle nature. This CD takes its name from the opening track, "Before The Parade Passes By," but vocalist Jack Donahue doesn't barrel through this song—or most others—like a fast-moving float. He usually prefers to use his pipes to tell a story, and he gently caresses the lyrics of any given piece with charm and respect. His sincerity comes through loud and clear in his delivery and, while Donahue has no problem selling a song, he's hardly an exhibitionist. In fact, his interpretations are often downright subdued and sensitive in nature.

While Donahue has made a name for himself with his writing as much as his singing, he only wears the vocalist hat on this album. The eleven-song selection covers everything from Jimmy Webb to the Gershwins, but nary a Donahue original can be found. Both Webb and Kenny Rankin apparently rank high on Donahue's list, since the vocalist has dipped into their respective oeuvres on prior occasions, and he seems particular inspired when singing their songs. Donahue's voice takes on a naturally soulful quality on Webb's "By The Time I Get To Phoenix," while the swinging four-to-waltz feel shifts in Rankin's "Haven't We Met?" keeps everybody on their toes, as Donahue even delights with some pseudo-scat singing.

The other high energy numbers, a sprightly take on "But Not For Me" and a cheery "Put On Your Sunday Clothes," provide some contrast, but prove to be the exceptions on the album. Instead, Donahue prefers to nourish with noir-ish fare ("Lazy Afternoon") or deal in dramatic, advice-giving gestures ("Let The Flower Grow"), capable of holding an audience in the palm of his hand in both realms. Marcus Parsley's cool-as-can-be muted trumpet work and Fred Hersch's masterful piano playing assist Donahue in the former venture, but the singers' own cabaret-infused vocal craft is the focal point on the latter.

The majority of the music on Parade doesn't pass by at a steady marching pace, but it pleasantly saunters forward in fine and mellow fashion, with Donahue leading the way.

Before The Parade Passes By; Spring Can Really Hang You Up The Most; By The Time I Get To Phoenix; Put On Your Sunday Clothes; If I Only Had A Brain; Haven't We Met; Didn't We?; I Wonder What Became Of Me; Let The Flower Grow; But Not For Me; Lazy Afternoon.