Stanley Dural was born in 1947 in Lafayette, La., a close-knit community where many black people express their Creole heritage by speaking French, and by playing and dancing to zydeco. This hybrid genre blends Afro-Caribbean rhythms with blues, soul, rock, country and the French-rooted Cajun music of the Creoles' white neighbors. As the son of a zydeco accordionist, Buckwheat grew up steeped in this culture, and also absorbed Lafayette's prodigious output of blues and Gulf Coast "swamp pop." He began his professional career as an R&B sideman, playing keyboards for the likes of Joe Tex, Barbara Lynn and Gatemouth Brown. In 1971, Dural began leading his own R&B band, Buckwheat and the Hitch-hikers, playing the contemporary sounds of such popular bands as Parliament Funkadelic and Earth, Wind & Fire. The group scored a regional hit with "It's Hard to Get."

By the mid-'70s, South Louisiana began to experience a grassroots cultural renaissance as zydeco and Cajun music gained appreciation as treasured cultural resources. As the demand for zydeco grew, Dural was offered a gig playing organ and piano with the King of Zydeco, the late, great Clifton Chenier. Buck (as he is also known) worked hard and learned all he could. After three years of touring, recording and accordion apprenticeship, he left in 1979 to lead his own group, Buckwheat Zydeco and the Ils Sont Partis Band. Like Chenier, Buckwheat has continued to blend traditional Creole zydeco with the latest black-contemporary styles, drawing on all of his rich and varied musical experience.

Recording prolifically for various independent labels, Dural attracted the attention of music journalist Ted Fox, who became his manager and co-producer. In 1987, Fox arranged Buckwheat's signing with Island Records. During the years of critical acclaim that have ensued, Buckwheat Zydeco has toured constantly, headlining major venues as well as sharing stages with the likes of U2 and appearing as a featured guest with The Boston Pops " which performed its own orchestrated versions of several Buckwheat Zydeco numbers.

The band performed at both of President Clinton's inaugurals, and Buck was featured on the Closing Ceremonies of the Atlanta Summer Olympics before a worldwide television audience of three billion, sharing the bill with Wynton Marsalis, Stevie Wonder, Faith Hill, Little Richard and Gloria Estefan. Buckwheat Zydeco has also made numerous appearances on national television shows such as Late Night with David Letterman, The Today Show and the CBS Morning News. Dural was also named a Louisiana Music Commissioner by the governor.

Another first for Buckwheat Zydeco was the release of the band's lively children's album, Choo Choo Boogaloo, on the Music For Little People label. The disc " which has won numerous awards and rave reviews " features zydeco originals as well as classics such as "Iko Iko," "Cotton Fields," "Little Red Caboose" and "Skip To My Lou."

The band celebrated its 20th anniversary in 1999 by newly releasing its studio LP, “Trouble.” The disc first appeared in 1997 in the midst of a shakeup at the Mesa/Atlantic label, and was reissued by Buck's label, Tomorrow Recordings, in an effort to bring what he feels is one of his strongest recordings to an even broader audience. Trouble covers the gamut of the Buckwheat Zydeco sound, and has earned rave reviews for its compelling mix of zydeco, blues, rock and soul, all played with trademark finesse and passion.

With the release of “Buckwheat Zydeco: Down Home Live!” in 2001, Dural showed on his first-ever live album what a powerful and dynamic musician and performer he is. He has kept the momentum going with “Classics,” a compilation on Rounder in 2003, and “Jackpot!, in 2005, for Zydecoroad.

With the current release of his new record on Alligator Records “ Lay Your Burden Down,” he displays his massive instrumental and vocal talents and boundless energy, Buckwheat remains and will continue to be not only the most popular zydeco artist in the world, but will find the largest and most enthusiastic audience of his long and storied career

The Louisiana accordion and organ master and vocalist recorded the new CD at Dockside Studios in Maurice, Louisiana with Steve Berlin (Los Lobos) producing (as well as leading the horn section). Buckwheat Zydeco celebrates its 30th anniversary with the new CD and a lengthy tour. Show less

Buckwheat Zydeco in Philly on June 6 - New CD Out on June 7 Features... 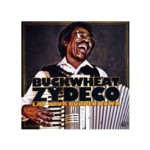 Lay Your Burden Down

All About Jazz musician pages are maintained by musicians, publicists and trusted members like you. Interested? Tell us why you would like to improve the Buckwheat Zydeco musician page.