On the heels of highly successful reunion tour last year, The Greyboy Allstars met in the studio for the first time in a decade to make What Happened to Television?, which is also the group's first collaboration with DJ Greyboy since their seminal 1995 debut, West Coast Boogaloo.

As on that album, which featured former James Brown musical director Fred Wesley, one hears on What Happened to Television? elements of the old-school funk and soul that have always preoccupied the band's namesake DJ, who returns here as co-producer in addition to performing on a track.

It was as an extension of Greyboy's weekly residency spinning records at San Diego's now defunct Green Circle Bar that the Allstars first formed in 1993-a diversity of emerging independent musicians who coalesced around a scene-defining DJ and his unique ear for music. After a few years in which word of the group-and, soon, the Allstars themselves-made their way around the world, it became clear to Greyboy that he was not interested in the touring life. So, retaining his name and spirit, the band continued on without him, recording and performing together for several more years.

Television was written and recorded in about a week's time, even though all of the writing took place during, rather than before, the group's reunion in the studio. "No one was allowed to bring any ideas that they had in. We had to sit down and all create together," explains Elgin Park.

The album was recorded totally live, without the use of computers. What few edits were made were done by the old-fashioned technique of cutting tape by hand. Capturing the sounds when truly fresh was, in part, a nod to the spontaneous brilliance of the band's shows. But it was more a case of the music simply feeling great to everyone right away that allowed the recording to begin-and be completed-so quickly.

"We were trying to be more composition minded and work on songwriting and song craft," says Walter. "It was possible that we'd go in there and not come up with anything and be sort of stuck with a bunch of material that wasn't really developed. But it flowed." He adds, "The music really is a product of the group," an observation supported by the way the album sounds unlike anything they've done before together, or in any of the band members' divergent solo careers.

In various ways, the group served as a platform for all of these individual endeavors. The Allstars' work on the soundtrack to Zero Effect led Elgin Park to the work he is perhaps best known for (as Michael Andrews): scores to such cult favorite films as Me and You and Everyone We Know and Donnie Darko-the latter generating a #1 hit in the U.K. for his cover of Tears For Fears' "Mad World," featuring singer Gary Jules-as well as the acclaimed television program "Freaks & Geeks." Andrews has also produced albums by Brendan Benson, Inara George, Metric and others.

Karl Denson went on to lead one of the most successful touring bands as well as recording with artists ranging from Miles Davis cohorts Jack Dejohnette and Dave Holland to the Blind Boys of Alabama. Robert Walter has released several celebrated solo album, leads many successful touring groups and plays with the legendary Headhunters. The rhythm section of Chris Stillwell and Zak Najor have been playing together since their early days as part of San Diego group Motherlode and have since lent their talents to everyone from the Dirty Dozen Brass Band and Ozomatli to Inara George.

Even for these now well-seasoned musicians, the catalytic force that seems to take hold when they collaborate with each other seems to pleasantly surprise them. Denson puts this accelerated pace of creation into perspective. "What we did in one week would take me two months to do of the same quality in any other situation," he reasons.

Television consists of tight songs rather than endlessly repetitive grooves. "Still Waiting" possesses a raw urgency, while "Old School Cylons" is an homage to early rap jams and their funk antecedents. "How Glad I Am" hearkens back to the '40's sass of the Andrews Sisters, but instead the vocals are provided by the current harmonies of the Living Sisters, a group comprised of Becky Stark, Eleni Mandell and Blue Note Records artist Inara George (daughter of the late Lowell George and member of The Bird and the Bee). The finale is a rousing cover of the Kings' classic "Give the Drummer Some," highlighting the band's members individually and collectively. DJ Greyboy even gets some as well, repaying the accolades with lively cuts and scratches of vinyl records.

Elgin Park's take on The Greyboy Allstars and their singular feel-good energy sums up a feeling shared by all of the band's members when they take time out of their individually busy schedules to work together. "In this band I'm a completely different player than in almost any other circumstance," he explains. Of reuniting in the studio he says, "It opened up a new world for me creatively." It was really liberating to be in the room with so many talented people and just have a good time again." Show less 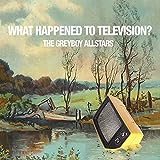 What Happened to TV?

All About Jazz musician pages are maintained by musicians, publicists and trusted members like you. Interested? Tell us why you would like to improve the Greyboy Allstars musician page.