His name is synonymous with Funk Music, his pedigree impeccable; his band: the tightest little funk orchestra on earth. Maceo Parker is known by aficionados as a James Brown sideman; appreciated mainly by those in the know. More than a decade and a half later Maceo Parker has been enjoying a blistering solo career. He navigates deftly between ‘60's soul and ‘70's freaky funk while exploring mellower jazz and the grooves of hip-hop.

Maceo Parker was born and raised in Kinston, North Carolina. His uncle, who headed local band the Blue Notes, was Maceo’s first musical mentor. Maceo grew up admiring saxophonists such as David "Fathead" Newman, Hank Crawford, Cannonball Adderley and King Curtis."I was crazy about Ray Charles, his band, and particularly the horn players". The three Parker brothers formed the Junior Blue Notes. When Maceo reached the sixth grade, their uncle let the Junior Blue Notes perform in between sets at his nightclub engagements. It was his first experience of the stage that perhaps goes some way to explaining a love affair with performing that has increased rather than diminished with time.

In 1964, Maceo and his brother Melvin were in college in North Carolina studying music when a life-changing event took place. James Brown, happened on to an after hours club in which Melvin was drumming a gig. Brown hired the Parker brothers about a year later, and Maceo recollects that he and his brother thought they’d play with JB for about six months and then head back to school. Maceo laughs, “We stayed a lot longer than that.” To most musicologists it’s that fertile group of men who are recognized as the early pioneers of the modern funk. Maceo grew to become the lynch-pin of the James Brown enclave for the best part of two decades, his signature style helped define James' brand of funk, and the phrase: "Maceo, I want you to Blow," passed into the language. He’s one of the most sampled musicians around because of the unique quality of his sound.

There would be other projects and short hiatuses during his on-off time with The Godfather, including a brief spell overseas when he was drafted, and in 1970 when he left to form Maceo and All the Kings Men with some fellow James Brown band members.

In the mid '70's Maceo hooked up with Bootsy Collins and George Clinton, and the various incarnations of Funkadelic and Parliament. He now had worked with the figure heads of Funk music at the height of their success, from the breathtaking shows of James Brown to the landing of the Mothership; Maceo has been as close as it gets to some of the most exciting moments in musical history, contributing his sound as a constant point of reference.

In 1990 the opportunity came for Maceo to concentrate on his own projects. He released two successful solo albums entitled Roots Revisited (which spent 10 weeks at the top of Billboard's Jazz Charts in 1990) and Mo' Roots (1991). But it was his third solo album, “Life on Planet Groove,” recorded live in 1992 which soon became a funk fan favorite.

Maceo began his relentless headlining touring, bringing his top notch, road-tight band and three hour plus shows all over the world. "I feel it's my duty as an artist to go as many places as I can, especially if the people want it." The soft spoken North Carolina native doesn't come out on stage in a diaper or a velvet swirling cape, no giant spaceships or 50 person entourages, nothing except the core of his musical soul which he lays open every time he blows his horn.

In 2004 he joined up with Prince, where his participation on the Musicology Tour, received huge critical acclaim, especially his tribute to the late Ray Charles with a performance of “Georgia on My Mind.”

At the beginning of 2007 Maceo had a chance to fulfill one of his dreams in working with Grammy winners the WDR Big Band, broadcasting and performing a live series of shows paying tribute to Ray Charles and putting Maceo’s own funky music to a Big Band setting. The success of these shows is leading to talks about future projects, in the meantime Maceo with his own die-hard band continues to tour around the world. Show less 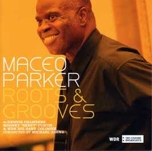 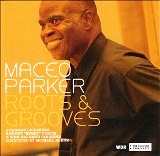 For All the KIngs Men

All About Jazz musician pages are maintained by musicians, publicists and trusted members like you. Interested? Tell us why you would like to improve the Maceo Parker musician page.