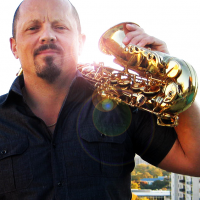 "Noah is a dynamo!"
—Jazz Society of Oregon

Noah grew up in Billings, MT as the youngest of four and son of a band director. All of the family played musical instruments although there was never much of an emphasis put on music as anything other than a hobby. Noah's dad had a reputation for having "A bible in one-hand and a shotgun in the other." All of the kids grew up strong. A lot of that was probably due to the rough and tumble attitude of Noah and his brothers and their ability to take their lumps when it came their time. Suffice to say country roots are the best roots.

Noah played in the school band and sung choir in elementary and middle school. Noah started playing in the school jazz band in middle school. He didn't compete in competitions much nor did he audition for regional band programs although his siblings did. One brother and his sister frequently did well at competitions and performed in All-state and regional bands. In high school, scheduling didn't allow for students to take both band and choir. As a result, Noah and several of his classmates skipped lunch and left band early to sing in the choir. Noah played in concert band, jazz band, marching band (at least until he made the varsity football team - captain his senior year!) and pep band whose rowdy reputation was notorious throughout the state and acknowledged by rival school basketball coaches as an emotional force to be reckoned with. Suffice to say, music, fun, and adventure were synonyms for Noah.

Noah enlisted in the United States Marine Corps in 1991 and was accepted into the Marine Music Program. He attended boot camp in San Diego and graduated the Armed Forces School of Music in Little Creek, Virginia. Noah fit well into the Marines. He was stationed at the Marine Corps Air Ground Combat Center in 29 Palms, CA. Serving in a Marine Field Band was quite the experience. Performing over 400 shows and logging 60,000 travel miles a year, the Band performed from Yuma, AZ to Portland, OR to Barber's Point, HI. Parades, festivals, fairs, concerts, schools, military ceremonies and everything in between Noah played Alto, Tenor, Bari, Soprano saxophone, and clarinet. Noah was in every band there was: show band, jazz combo, concert band, cut-down band, tenor band...if there was a gig, he was on it. The experiences and lessons learned would serve him well in the future. The stories are endless, ask him about it sometime and you'll tire of the tales long before he runs out of stories from those loved, strange, and frustrating years. But as he says, "The Marine Corps was a great place to get prepared for being a professional musician."

Noah was discharged from the Marines in 1994 and went to Portland, OR to study music at Marylhurst University. Noah studied under Sister Anne Cecile Daigle and Sister Magdelene Fautch (both SNJM). His college experiences were mostly uneventful as Marylhurst is a small, private, liberal arts school focusing on adult education. Never one to sit on his hands he started his first professional group, The Noah Peterson Quartet. He soon added a fifth member and changed the name of the group to Miles Ahead. This group played mostly modern modal jazz covers and originals.

Noah's first band was a great forum to see how much of his military experiences translated into civilian life. Turns out, it was all VERY compatible. Noah scored a few gigs and landed a regular Friday lunch and jazz gig at Irey's Bistro just down the road from the university. This gig lasted a year and was a great place for the band to find its feet and get moving. Noah began getting more gigs for the group and started his own booking agency, Peterson Entertainment. Noah had about 40 acts he represented, although he quickly found out that being a booking agent isn't a worthwhile pursuit for a full-time student, upstart jazz musician, band-leader, and person balancing three part time jobs.

Noah got his BA in 1998 and led his Miles Ahead for eight years. The band went on two multi-state tours and Noah's composition "Smoke This" from "Milepost 1" was spun regularly on KLON's nationally syndicated "Soul Jazz" program with Payal Kumar. Amazingly, the band rehearsed almost every week for 8 years and had only two personnel changes. During their run, they held a Wednesday house band slot at The Ash Street Saloon in the mid-1990s and held a regular, much-coveted First Thursday gig at the legendary, and now defunct, Jazz de Opus for a year. The band's success got to a point where some members no longer wanted to play weddings or corporate events and wanted to perform original compositions at concerts and clubs. Noah was happy to oblige his band and started performing weddings and corporate parties as a solo act returning to his original "The Noah Peterson Quartet" name.

During these years, Noah began joining other groups as well: punk, hip-hop, blues... whatever he could fit into his schedule and balanced all of them fairly well with his day-job. Noah met all sorts of people, some which are close friends to this day and some who aren't. Miles Ahead broke up on their last tour in Salt Lake City and performed their last gig at Monk's House of Jazz to a packed house. A fine way to go out.

Noah's first solo CD, The Noah Peterson Quartet Live at Biddy McGraw’s received wide spread airplay throughout the US, Canada with some airplay in Europe, Africa, Australia and Asia. It was "A Downbeat Featured CD" spending 3 months on Downbeat Magazine's website as a featured CD. This band featured Ed Coleman III on drums, Dennis Caiazza on Bass and Jay Stapleton on guitar. They performed frequently and enjoyed a small, but steady, following. This is also Noah's first sold out record.

Noah began playing with many other groups, juggling 8 bands at one point as well as occasional side-man gigs for blues and cover bands. Some groups rarely made it out of the basement, others were almost exclusively performance with little to no rehearsal. Jazz, hip-hop, dance bands, funk, avante-garde, reggae, blues, folk, pop, zydeco, African... the word "no" did not exist. Gigs were played, business was done and records were made.

Since then, Noah has been in and out of many groups, organized recordings, started "A Celebration of Poetry in Jazz" concert series, the "NW Loopfest" and the "San Antonio Loopfest" and the "SoCalLoopFest." Noah's interest in looping came about in 2011 as he prepared to leave Portland, OR for parts unknown. He needed a cost effective way to tour the nation and play gigs. He developed his Solo Sax Sessions as a one-man sax-looping show that has become very popular. It's unusual presentation of music and technology is fun, upbeat, unique and quirky enough that many venues love to have for a wide range of audiences. Noah's looping show astounds and delight audiences across the country.

Noah has been involved with the American Federation of Musicians since 1994. He served three terms on the executive board for Local 99 (Portland, OR) and is a current member of Local 23 (San Antonio, TX) Noah helped developed the nationally recognized "Handei" program for Fools in Paradise and has developed a new program, "Imagine: Music!" for his one man show, the Solo Sax Sessions. He was also awarded a grant in 2013 for Emmett Wheatfall's "Poetry and the Blues" project by the Regional Arts and Culture Council in Portland, OR.

Noah currently lives in San Antonio, TX and hires out for a variety of occasions. His main groups are The Noah Peterson Jazz Ensembles, the Solo Sax Sessions, West Kings Highway, La Chichada, and Jean-Pierre and the Zydeco Angels.

Noah's company/record label, Peterson Entertainment, Llc carries some outstanding records of bands past and present. His catalog is always expanding and he works with other artists to develop their business practices. 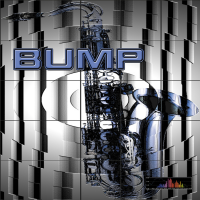 A Song For You

From: Bump
By Noah Peterson

All About Jazz musician pages are maintained by musicians, publicists and trusted members like you. Interested? Tell us why you would like to improve the Noah Peterson musician page.