Roy Haynes was born in Boston, March 13, 1925, and was keenly interested in jazz ever since he can remember. Primarily self-taught, he began to work locally in 1942 with musicians like the Charlie Christian inflected guitarist Tom Brown, bandleader Sabby Lewis, and Kansas City blues-shout alto saxophonist Pete Brown, before getting a call in the summer of 1945 to join legendary bandleader Luis Russell (responsible for much of Louis Armstrong's musical backing from 1929 to 1933) to play for the dancers at New York's legendary Savoy Ballroom. When not traveling with Russell, the young drummer spent much time on Manhattan's 52nd Street and uptown in Minton's, the legendary incubator of bebop, soaking up the scene.

Haynes was Lester Young's drummer from 1947 to 1949, worked with Bud Powell and Miles Davis in '49, became Charlie Parker's drummer of choice from 1949 to 1953, toured the world with Sarah Vaughan from 1954 to 1959, did numerous extended gigs with Thelonious Monk in 1959-60, made eight recordings with Eric Dolphy in 1960-61, worked extensively with Stan Getz from 1961 to 1965, played and recorded with the John Coltrane Quartet from 1963 to 1965, has collaborated with Chick Corea since 1968, and with Pat Metheny during the '90s. Metheny was featured on Haynes' previous Dreyfus release Te Vou! (voted by NAIRD as Best Contemporary Jazz Record of 1996). He's been an active bandleader from the late '50s to the present, featuring artists in performance and on recordings like Phineas Newborn, Booker Ervin, Roland Kirk, George Adams, Hannibal Marvin Peterson, Ralph Moore and Donald Harrison. A perpetual top three drummer in the Downbeat Readers Poll Awards, he won the Best Drummer honors in 1996 (and many years since), and in that year received the prestigious French Chevalier des l'Ordres Artes et des Lettres.

“I structure pieces like riding a horse,” he says. “You pull a rein here, you tighten it up here, you loosen it there. I'm still sitting in the driver's seat, so to speak. I let it loose, I let it go, I see where it's going and what it feels like. Sometimes I take it out, sometimes I'll be polite, nice and let it move and breathe — always in the pocket and with feeling. So the music is tight but loose.”

“I am constantly practicing in my head. In fact, a teacher in school once sent me to the principal, because I was drumming with my hands on the desk in class. My father used to say I was just nervous. I'm always thinking rhythms, drums. When I was very young I used to practice a lot; not any special thing, but just practice playing. Now I'm like a doctor. When he's operating on you, he's practicing. When I go to my gigs, that's my practice. I may play something that I never heard before or maybe that you never heard before. It's all a challenge. I deal with sounds. I'm full of rhythm, man. I feel it. I think summer, winter, fall, spring, hot, cold, fast and slow — colors. But I don't analyze it. I've been playing professionally over 50 years, and that's the way I do it. I always surprise myself. The worst surprise is when I can't get it to happen. But it usually comes out. I don't play for a long period, and then I'm like an animal, a lion or tiger locked in its cage, and when I get out I try to restrain myself. I don't want to overplay. I like the guys to trade, and I just keep it moving, and spread the rhythm, as Coltrane said. Keep it moving, keep it crisp.”

Dreyfus Jazz proudly released Roy Haynes’ “Birds of a Feather,” a tribute to the immortal Charlie “Bird” Parker, in September 2001. The father of the bebop movement, Bird turned the jazz world upside down in the early 1940s with his immense technical facility and grand breaking improvisational ideas. For Haynes’ fourth recording for the label, the eminent drummer and bandleader takes us back to the era during which he made his first major impact playing alongside Bird, Dizzy Gillespie, Bud Powell and the other legendary bop progenitors. The album was nominated for a Grammy in 2002. 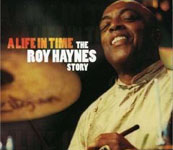 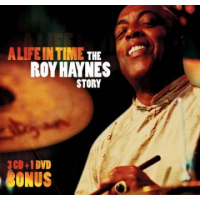 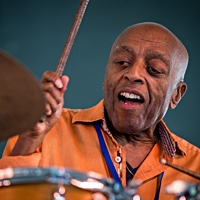 All About Jazz musician pages are maintained by musicians, publicists and trusted members like you. Interested? Tell us why you would like to improve the Roy Haynes musician page.