As a jazz drummer, studio musician, bandleader and businessman, Shelly Manne was one of the most prolific instrumentalists of modern times. “I’ve really had the best of both worlds,” he said in 1983. “I’ve kept busy playing jazz, and between engagements I’ve had the studios to fall back on.”

The New York City-born musician was the son of Max Manne, a percussionist who pioneered the synchronization of sound with motion pictures and cartoons, and nephew of Morris Manne, who did sound effects for Popeye cartoons. Shelly was introduced to jazz as a youth and was greatly influenced by Jo Jones and Dave Tough. During the early 1940s, he subbed for Tough, who suffered from alcoholism and epilepsy, in both the Benny Goodman and Joe Marsala bands. In the ’50s, Manne played the role of Tough in two motion pictures: The Five Pennies and The Gene Krupa Story.

A first-generation bebopper who played on Dizzy Gillespie’s earliest recordings as leader, Manne developed a national reputation for his 1946-1952 membership in Stan Kenton’s hugely popular “progressive jazz” orchestra. In 1954, two years after relocating to Southern California, he launched a lucrative Hollywood studio career, beginning with Alfred Hitchcock’s Rear Window. For the next two and a half decades, Manne was the percussionist of choice for such composers as Elmer Bernstein, Jerry Goldsmith, Henry Mancini, and John Williams, contributing to countless motion picture and television soundtracks.

Manne would always cancel a studio date when there was a chance to play jazz with his combo, Shelly Manne & His Men, which featured such players as pianist Russ Freeman, trumpeter Conte Candoli, and saxophonists Charlie Mariano, Richie Kamuca, and Frank Strozier over the years. Manne & His Men recorded extensively for Contemporary between 1953 and 1970 and also cut albums for Atlantic and Capitol.

Manne, pianist André Previn, and bassists Leroy Vinnegar or Red Mitchell made a series of trio albums for Contemporary-billed alternately as Shelly Manne & His Friends or André Previn & His Pals-including the best-selling Modern Jazz Performances of Songs from “My Fair Lady” in 1956. A consistent winner of Down Beat’s Readers Poll, the drummer also cut a series of LPs for the label with guitarist Barney Kessel and bassist Ray Brown, billed collectively as the Poll Winners. And Manne appeared as a sideman on numerous Contemporary dates, including albums by Benny Carter, Ornette Coleman, Hampton Hawes, Helen Humes, Red Norvo, Art Pepper, and Sonny Rollins.

The busy musician also managed to operate a nightclub, Shelly’s Manne-Hole, which rivaled the Black Hawk and Jazz Workshop (both in San Francisco) as the West Coast’s top spot for touring jazz groups. He ran the club at its original Hollywood location from 1960 to ’72, booking Miles Davis, Bill Evans, Thelonious Monk, and other major artists. Manne & His Men regularly performed at the club and cut two live albums there for Contemporary in 1961. Shelly’s Manne-Hole relocated to the Wilshire area of Los Angeles in 1973 but closed the following year.

During the last decade of his life, Manne cut back on soundtrack work. “Nearly all the music you hear on TV now or in a lot of movies is pop-oriented, like they’re trying to get a record out of what they’re doing,” he complained in 1983. “They want you to sound like somebody else.”

Playing jazz, however, allowed Manne to be his own swinging, highly empathetic self, and he had more time than ever to devote to it-at the helm of a trio featuring pianist Mike Wofford; as co-leader of a quartet with saxophonists Lew Tabackin and Zoot Sims; and with Ray Brown, saxophonist-flutist Bud Shank, and guitarist Laurindo Almeida in the L.A. Four.

“Being a drummer,” Manne once stated, “you can create but not dominate-and mostly you just have to sit back there and play time so that the horn players can get their propelling force from you. It’s much more difficult leading from behind the drums than just drumming, but it’s something I wouldn’t give up. It’s something I have to do because when you’re got a group and they’re really swinging. . . . there’s no other experience quite like it.” Show less 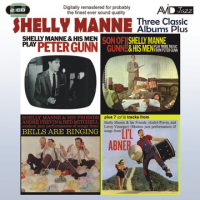 The Best Of Shelly... 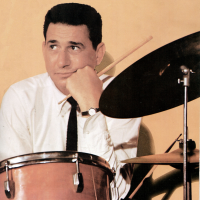 All About Jazz musician pages are maintained by musicians, publicists and trusted members like you. Interested? Tell us why you would like to improve the Shelly Manne musician page.