Payne began his professional recording career with J.J. Johnson on the Savoy label in 1946. During that year he was also began playing with Roy Eldridge, through whom he met Dizzy Gillespie. Gillespie hired him and he stayed onboard until 1949, heard performing solos on "Ow!" and "Stay On It". In the early 1950s he found himself working with Tadd Dameron, and worked with Illinois Jacquet from 1952 to 1954. He then started freelance work in New York and frequently performed during this period with Randy Weston with whom Payne worked with until 1960. His earlier recordings would largely fall under the swing category.

Jazz Legend Cecil Payne to Appear at the Kitano 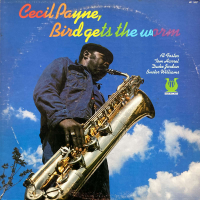 Bird Gets The Worm

All About Jazz musician pages are maintained by musicians, publicists and trusted members like you. Interested? Tell us why you would like to improve the Cecil Payne musician page.