One of the premier bassists in jazz history, Paul Chambers had it all: a beautiful tone, a fluid technique, a great choice of notes, impeccable time and a magnificent sense of swing. He could even take a bowed solo and keep it interesting and in tune.

Paul Chambers was born in Pittsburgh in 1935, and grew up in Detroit, where he became part of the city's growing jazz scene. He moved to New York, where he played in the J.J. Johnson-Kai Winding quintet. He joined Miles Davis' first legendary quintet along with John Coltrane, Philly Joe Jones, and Red Garland, at the age of 20. As the bass player, he complimented Jones perfectly on fast songs and played just well on ballads. He spent the bulk of his prime years (1955-1963) as a member of the Miles Davis Quintet, participating in virtually all of Davis' classic recordings of the era. After leaving Davis' group, he continued working with the pianist who replaced Garland in Davis' group, Wynton Kelly, and he did freelance work in New York.

Paul was about 15 when he started to listen to Bird and Bud, his first jazz influences. Oscar Pettiford and Ray Brown, the first bassists he admired, were followed in his book by Percy Heath, Milt Hinton and Wendell Marshall for their rhythm section work, Charles Mingus and George Duvivier for their technical powers and for their efforts in broadening the scope of jazz bass. Blanton, of course, is his all-time favorite, the perennial poll winner in his ballot.

His formal bass training got going in earnest in 1952, when he began taking lessons with a bassist in the Detroit Symphony. Paul did some "classical" work himself, with a group called the Detroit String Band that was, in effect, a rehearsal symphony orchestra. Studying at Cass Tech. off and on from 1952 to '55 he played in Cass' own symphony, and in various other student groups, one of which had him blowing baritone sax. By the time he left for New York at the invitation of Paul Quinichette, he had absorbed a working knowledge of several armfuls of instruments.

Chambers made several albums as a leader, for Blue Note and Vee Jay. His Blue Note recordings were High Step, (1955) Chamber's Music, (1956) Whims of Chambers, Paul Chambers Quintet, (1957) and Bass on Top, considered his best work, also in 1957. These are reissued in the Mosaic compilation on his output for the label. In addition, he recorded as bassist with many musicians including Coltrane, Cannonball Adderley, Sonny Rollins, Bud Powell, Freddie Hubbard, and Donald Byrd.

Chambers holds the unique distinction, along with Coltrane and Wynton Kelly, of participating on two of the most important albums in jazz history: Coltrane's Giant Steps, and Davis' Kind of Blue. Both albums are radically different in style, a testament to Chambers' ability. As a matter of fact, the song "Mr. P.C." on "Giant Steps," was written for Chambers (P.C. = Paul Chambers). Coltrane said about him, "Chambers is one of the greatest bass players in jazz. His playing is beyond what I could say about it. The bass is such an important instrument, and has so much to do with a group and a soloist can best function that I feel very fortunate to have had him on this recording date and to have been able to work with him in Miles' band so long."

Unfortunately, Chambers died of tuberculosis at the premature age of 33. 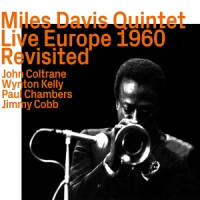 All About Jazz musician pages are maintained by musicians, publicists and trusted members like you. Interested? Tell us why you would like to improve the Paul Chambers musician page.