Chip Boaz plays Latin Jazz with the bass on top. Six string bass highs and lows form the foundation for your musical experience. Melodic bass solos glide through a sea of Afro-Cuban rhythms and electronic sounds. Strong bass lines anchor contemporary sounds in the landscape of both Afro-Cuban and Jazz traditions. Infectious grooves inspire your feet to dance and your ears to listen a little closer. It's Latin Jazz with an emphasis on the low end, created to move you!

Chip built the foundation for his musical explorations through early years of academic study. Chip’s teenage life was spent in high school bands and at-home garage bands, which inspired him to turn his passion for performance into a career. Over the next several years he focused on musical studies first at San Jose State University, then Wesleyan University. While there, Chip dedicated equal time to the study of both Afro-Cuban bass masters like Israel “Cachao” Lopez and Carlos Del Puerto and jazz bass soloists such as Paul Chambers and John Patitucci. Chip spun these influences into a musical voice that guides his performances today.

Over the course of the next several years, Chip played with many of the outstanding bands that make up San Francisco's active Latin music community. Some of the groups he has performed with include Mazacote, Orquesta America, Avance, Charanson, Los Rumberos, Caña Roja, and Salsa Caliente. Chip has shared the stage with a number of the Bay Area's world class musicians including Anthony Blea, Louis Romero, Karl Paraza, John Calloway, Gibby Ross, Carlos Caro, Mark Levine, and many more. Through years of salsa, merengue, and latin jazz gigs, Chip's musical concept has become firmly rooted in clave.

Currently inspired to explore new territories with his bass playing, Chip has turned to writing original music. While staying firmly rooted in the Afro-Cuban and jazz traditions, Chip incorporates ideas that go beyond the limits of established musical formulas. His first album, Sketches of Bass En Clave, embraces a wealth of electronic sounds, bass melodies, and funky breaks. The resultant sound treats listeners to a fresh and exciting musical experience. As Chip continues to shape his musical style, he works from a Latin Jazz foundation with the bass on top! Show less

Chip Boaz Launches A New Era Of His Musical Journey With The Release Of... 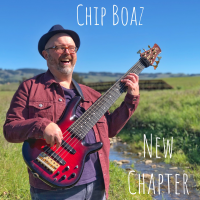 From: New Chapter
By Chip Boaz

All About Jazz musician pages are maintained by musicians, publicists and trusted members like you. Interested? Tell us why you would like to improve the Chip Boaz musician page.