With exposure to the different styles such Jazz, Funk, Latin, Gospel and inspired from being surrounded by unique melodies and rhythm while working with Brazilian and African decent, pianist Mamiko Watanabe is trying to create uniquely her own sound and give "good vibration" to people through music.

Mamiko Watanabe was born in Fukuoka, Japan and began studying piano at age four at the Yamaha Music School. In 1999 she revived a scholarship to attend Berklee College of Music and studied Jazz piano, Improvisation and Composition. She was a semi-finalist at the prestigious Montreux Jazz Festival Solo Piano Competition in Montreux, Switzerland both in 2002 and 2003. She has toured Germany, Italy and Japan and has performed with several jazz greats such as Joe Lovano, Kevin Mahogany, Bobby McFerrin, Tiger Okoshi and Phil Wilson while in college. In 2003 she received the DownBeat Student Award in the Jazz Soloist Category before she made the decision to move to New York and expand her musical horizons. Since then, Mamiko has performed at notable venues such as The Kitano, Blue Note NY Sunday Brunch & Late Night Groove Series, 55 Bar, Garage, Zinc Bar, The Lenox Lounge, Blues Alley (in Washington, D.C.), The Kennedy Center, Victoria Theater (at the New Jersey Performing Arts Center), The Knitting Factory, Bitter End, Joe's Pub and S.O.B.'s.

Her exposure to several different styles of music such as Latin, Gospel, Reggae, Funk and R&B is the result of her working with several Afro-Brazilian and African bands and playing Gospel in Church every Sunday morning. She has worked with Roland Alexander Quintet, Joe Ford, Valery Ponomarev Big Band & His Quintet and Afro-Brazilian groups such "Ogans", "Dende" and "Velly Bahia & Kazwa Band".

As a leader, Mamiko recorded her album, "One After Another" in 2005 and released her second album,"ORIGIN/JEWEL” in 2007 which in fact is actually the combination of two separate discs; "ORIGIN" is a collection of the Funk and Latin influences compositions and "JEWEL" contains works recorded in a more straight-ahead jazz piano trio format. Her latest album "Mother Earth" was released in 2010.

"Throughout Mother Earth Watanabe displays talents as a pianist, composer and arranger that makes a listener smile and shake their head with the pleasure of it all. And on this disc, the pleasures are many."-The New York City Jazz Record

“Watanabe's piano playing and leadership on both discs is deft, challenging and always solid.” - All About Jazz NY Magazine

"Throughout Mother Earth Watanabe displays talents as a pianist, composer and arranger that makes a listener smile and shake their head with the pleasure of it all. And on this disc, the pleasures are many."-The New York City Jazz Record

“Watanabe's piano playing and leadership on both discs is deft, challenging and always solid.” - All About Jazz NY Magazine

“Ms.Watanabe already has a sound of her own plus impressive technique. Her creativity is impressive throughout these modern mainstreem performances and she is a skilled songwriter.” - Scott Yanow; The Los Angeles Jazz Scene Magazine 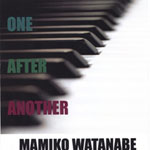 All About Jazz musician pages are maintained by musicians, publicists and trusted members like you. Interested? Tell us why you would like to improve the Mamiko Watanabe musician page.