The comparison is inevitable. How could it be otherwise? Tito Puente Jr. carries his father with him - imprinted on his physical being and locked in his soul. It's in his looks, his joy, his music. No doubt, every time Tito Jr. walks on stage - he walks in his father's footsteps.

He dances in celebration, throws his head back in pure joy and lights up the room with that oh-so-familiar smile. Tito Jr. is on a passionate mission. The younger Puente is determined to nurture the musical legacy left by his father. He refuses to let it become a distant memory; "He was just too vibrant, too exciting. There was magic in the music my father made. It made people happy, all over the world. My goal is to keep it alive, and in doing so, expose it to a whole new generation."

Over the past two years, Tito Jr. has found captive audiences who echo his passion. Crowds once lured to a venue by the father's magic have returned to enjoy the son -- participating once again in the high voltage celebration that takes place on stage.

Tito Puente, Jr. has become a favorite entertainer in casinos, performing arts centers and jazz festivals nationwide. He was the premiere act opening The Latin Quarter of the Tropicana Hotel and Casino in Atlantic City, and the demand for tickets kept him there for ten weeks. He's played to sell out audiences at numerous Harrah's Resort Casinos, including Rincon in San Diego, Ak-Chin in Phoenix and the Rio in Las Vegas.

While not totally jazz in his delivery, Tito Jr. has wowed the jazz festivals faithful across the country, among them the New Haven Jazz Festival, Houston Jazz Festival, Harlem Jazz Festival, and the Atlanta Jazz Festival. Tito, Jr. has appeared as a guest of the Dallas Symphony Pops, and will join the San Antonio Symphony for 3 concerts in their upcoming season.

In performing arts venues from the Kravis Center in Florida to Popejoy Hall in New Mexico, as well as outdoor concert events such as El Paso's "Music Under the Stars" or Los Angeles' Ford Amphitheater, rhythms ignite and Afro-Cuban beats fire up audiences, crossing cultures and generations.

A favorite performer of many corporations, Tito, Jr. has headlined events for clients such as Royal Caribbean Cruise Lines, Southern Wine & Spirits and Cook Pharmaceuticals. His role as spokesperson for the Perry Ellis/JC Penny "Havanera" clothing line has taken him on promotional appearances all across the country.

In the spirit of giving back, Tito, Jr. has participated in 2 USO Tours during the past 18 months, visiting and performing for troops in Japan, Korea, Spain, and Italy. His appearances at fundraising events for causes including the Jerry Lewis MD Telethon and Toys for Tots help generate thousands of dollars annually.

It was only fitting that Tito's tribute to his father's music was seen on NBC's two hour special -- "The Apollo at 70: A Hot Night in Harlem," One of the most prominent photos inside the venerable Apollo Theatre is that of "Tito Puente - El Rey de Timbales," where Tito played frequently. Tito Jr. was also seen recently on the highly rated ABC-TV daytime drama "One Life to Live" in performance with his big band.

His latest CD, "In My Father's Shoes," featuring the classic Puente favorites, was spun off into a television special tribute by BET Jazz.

Tito Jr. reveres the magnificent, lasting impact his father had on our musical lives. Audiences the world over agree there is nothing so perfect, pure or passionate than a tribute to a father from his son. "People who don't know anything about Latin music know my father and people always, always smile when they say his name," he confides. That is a very special gift, and it inspires and motivates me to bring his music to the world." 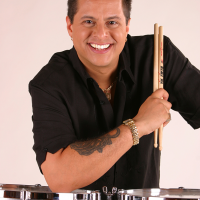