Beloved as the undisputed Queen of Salsa, Celia Cruz had a remarkable six-decade career, with more than 70 records, two Grammy awards, and three Latin Grammys, among numerous other accolades, to her credit.  Cruz, who sang only in her native Spanish language,also received a Smithsonian Lifetime Achievement award, and a National Medal of the Arts for her contributions to Latin music and culture.

Celia Cruz began singing in amateur contests at the age of 14, in her home city of Havana, Cuba. She studied music theory, piano and voice at the National Music Conservatory.

In 1950 she began singing with the conjunto Sonora Matancera, and with that group she was a central figure in some of the most glorious chapters of Afrocuban music, recording a number of legendary songs, including “Yembe Laroco,” “Yerbero Moderno,” “Burundanga,” and “Caramelo.” By the end of the '50s the Sonora Matancera was the most popular group in Cuba. Celia's alliance with them took her beyond the coast of Cuba and exported her talent to the world. While in the group she met Pedro Knight, at the time one of the band's two trumpeters. This relationship culminated in matrimony and has lasted 42 years.

On July 15, 1960, she left Cuba. Upon arriving in the United States, she made history once again. In the following decade she recorded various albums with maestro Tito Puente, and together they awoke the interest of the Anglo and European public in Latin music, a phenomenon that in the '70s became known as the salsa boom. Other distinguished Latin musicians with whom she collaborated included Johnny Pacheco (with whom she recorded such classics as “Quimbara,” “Cúcala,” and “Bemba Colorá”), Willie Colón, Pete “Conde” Rodr�-guez, Ray Barretto, Sonora Ponceña, and the Fania All Stars.

It is not exactly clear when they started calling her “The Queen of Salsa”, but she has carried the title with class and distinction. Celia has had the opportunity to work with important figures of American popular music. Dionne Warwick, Patti Labelle, David Byrne, Gloria Estefan and Wyclef Jean among others. As her talent has always embraced people of all generations and tastes, she has also sung with rock groups such as the Fabulous Cadillacs and Jarabe de Palo.

Some of the most visited streets in the world carry her name. In 1987 she received a star on the Walk of Fame in Hollywood. Three years later Calle Ocho in Miami was named “Celia Cruz Way” and, in 1991, that city also awarded her a star on the boulevard, an honor that was also conferred on her in San José (Costa Rica), and in Mexico City.

Among her many distinctions in the '90s, the Smithsonian Institution awarded her their Lifetime Achievement Award; the Republic of Colombia gave her the Presidential Medal of the Arts; she received the Lifetime Achievement Award from the prestigious Hispanic Heritage Awards; and the city of San Francisco declared October 25,1997 Celia Cruz Day. But without a doubt one of the most exciting moments of her life was in 1994, when President Bill Clinton awarded her the National Medal of Arts, the United States' highest official honor in the arts, in a ceremony at the White House in Washington, D.C. Show less

Keeping the Flame Burning for a Beloved Queen of Salsa 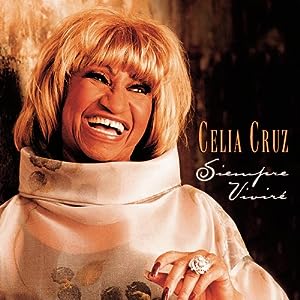 All About Jazz musician pages are maintained by musicians, publicists and trusted members like you. Interested? Tell us why you would like to improve the Celia Cruz musician page.