Beloved as the undisputed Queen of Salsa, Celia Cruz had a remarkable six-decade career, with more than 70 records, two Grammy awards, and three Latin Grammys, among numerous other accolades, to her credit.  Cruz, who sang only in her native Spanish language,also received a Smithsonian Lifetime Achievement award, and a National Medal of the Arts for her contributions to Latin music and culture. Celia Cruz began singing in amateur contests at the age of 14, in her home city of Havana, Cuba. She studied music theory, piano and voice at the National Music Conservatory. In 1950 she began singing with the conjunto Sonora Matancera, and with that group she was a central figure in some of the most glorious chapters of Afrocuban music, recording a number of legendary songs, including "Yembe Laroco," "Yerbero Moderno," "Burundanga," and "Caramelo." By the end of the '50s the Sonora Matancera was the most popular group in Cuba

As the song's lyrics about freedom were sung, the child's conscience consumed them whole. This child, ten years young at the time, had never heard the singer, Ismael Rivera, or the song, “Las Tumbas," before, but, three decades later, this initial impression remains in Miguel Zenon's memory. “I was taken by the song's overall ...

The Cry of Jay Rodriguez

On an unseasonably warm February evening I set out from Brooklyn to catch the multi-instrumentalist Jay Rodriguez's band at Le Poisson Rouge. While walking from the West 4th Street subway station to the venue on Bleecker Street I recalled taking this exact route over 30 years ago to play a jam session in the ...

Sunday at the Monterey Jazz Festival

Friday | Saturday | Sunday Sunday was a spectacularly beautiful day in Monterey which was just perfect for the 12-hour marathon of music. The closing day of the Jazz Festival included a stellar lineup of great jazz artists including Joe Lovano, Vijay Iyer, Linda May Han Oh, Brad Mehldau, Regina Carter and the closing ... 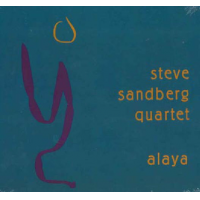 The best word to sum up pianist Steve Sandberg's work is expansive. If his own performance history doesn't make that point clearly enough--he's hobnobbed with Brazilian music royalty like the Gilberto clan, made his mark on the salsa world by working with artists like Ruben Blades and Celia Cruz, touched down time and again in the ...