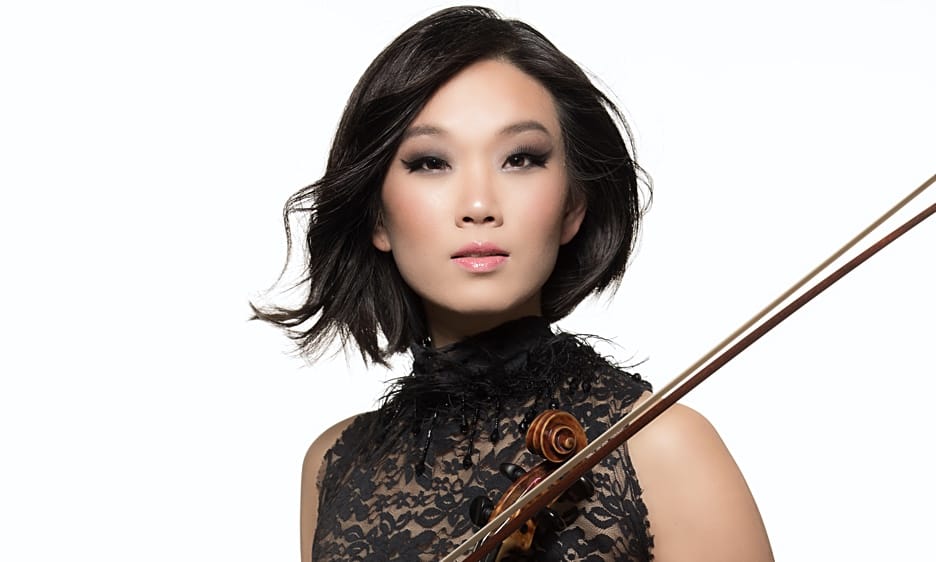 BY MAUREEN CHOI
February 27, 2020
Sign in to view read count

Now residing in Spain, this Korean-American violinist is sparkling a revolution in the improvised music scene in Spain. Her band Maureen Choi Quartet is creating a sound that they describe as, "Spanish Chamber Jazz."

After winning several international violin competitions starting at age five, Maureen has performed as a soloist across Australia, Asia, Europe and North America. A graduate from Michigan State University and Berklee College of Music, she has performed with artists like Rodney Whitaker, Johnny O'Neal, Larry Harlow, Josh Groban, Kanye West, Tran-Siberian Orchestra, or Javier Colina and recorded for many artists and movie soundtracks. She taught improvisation, Latin rhythms and violin technique at Berklee College of Music and presently teaches at Centro Superior Música Creativa in Madrid.

I started playing the violin when I was 3 and the piano when I was five. Violin is my principle instrument but I always compose on the piano.

I grew up studying classical music with Sally O'Reilly and Paul Kantor. Then I studied jazz with Rodney Whitaker at Michigan State University and with Rob Thomas at Berklee College of Music.

When I was a child, I was only interested in playing violin, piano and dancing ballet. When I turned 12, my mom told me to pick between the three disciplines to dedicate myself and I answered "violin" without thinking twice. I always knew that I wanted to be a violinist but her guiding me to focus was the key to organizing my time and setting goals.

Intimate, dynamic, strong, delicate, energetic, emotional, colorful, tragic, passionate, pensive and temperamental are some of the words that I would use to describe my sound. When I write music, I try to listen to myself, follow my ear and compose from the heart and the combination of all that is what I am creating at this moment.

I have a huge passion for teaching and I love solving problems. Each student comes to me with a set of strengths and weaknesses and my goal is to help them be their own teacher and give them the tools to practice efficiently. I also try to have them constantly ask questions and figure out the answers for themselves. My studio is filled with loving and supportive students who help each other and I am very proud to have created an atmosphere where my students are open to growing together.

My band has converted into my family in Spain. How much we love each other, how much we support each other and how we always think about the collective has created the best environment to grow not only musically, but also personally. I feel very lucky to not only share the stage with my band mates, but also my daily life.

The worst experience was when I played in Chicago on a Tuesday night, made $500 from ticket sales and got a bill from the venue for $499 for the rental of the drums.

I don't have one. I care more about the people working at the venue. If they are nice and treat the musicians well, I am happy. It doesn't have to be the coolest or the fanciest place as long as the people are nice and do their best to promote live music. I played in a super posh club in Shanghai and they wouldn't even give us water. That felt terrible.

Theia, my new album. This album was recorded live and it really reflects the growth of the band. I wrote this album after some years living in Spain so it is definitely the most "Spanish" sounding album but furthermore, it is the album that completely displays my true voice. My compositions, my improvisations and the arrangements really reflect who I am musically and where I am at this moment living in Spain.

There aren't many violinists who are combining music of the Spanish diaspora, flamenco, jazz and classical music. I hope that I am encouraging other violinists to branch out of the classical scene if they are interested in other genres of music.

That I love plants but I always end up killing most of them?

I honestly don't remember. When I used to go out and buy CDs, I usually bought many at once.

It all depends on where we are talking about. If I talk about jazz in the U.S., I would have to say that things are looking kind of sad. Live music venues are constantly closing and funding for the arts just keeps diminishing. In South Korea, jazz is booming and China is starting to get interested in jazz. Taiwan also is becoming more interested in jazz and has a lot of support from their government. There are so many jazz festivals in Europe and they seem to become more relevant every year. Spain is pretty terrible when it comes to their support for the arts but its neighbor, Portugal, has a really vibrant music scene. I hear that Italy is pretty terrible also. I think the arts in general is in trouble because of what we are forced to consume and accept but that's a whole different conversation.

I think that people don't have access to jazz. Jazz is becoming more and more elitist and that is creating some kind of a barrier. I went to go see Wynton Marsalis at the Hill Auditorium in Ann Arbor and tickets were $125. I am not saying that Wynton shouldn't charge $125 for his shows but it seems that jazz is going in the same direction as classical music. Classical music is very much for the elite and the rich while the general population never gets to hear a Beethoven symphony played live. If we want people to go to a jazz concert, we need to keep it accessible.

I am still touring with my 2019 album Theia and will return to the U.S. in March 2020. We'll play concerts in Virginia, Maryland, Washington, D.C. and on Maryland's Eastern Shore and I'll be a guest panelist at an annual Women in Jazz event at Montpelier Arts Center. I am also planning to record another album at the end of the year, so stay tuned!

I don't think I have this one great fear to call it the greatest fear. I have many small worries more than fears but it really depends on where I am, how my energy is physically (if I'm rested or tired), what's going on in my life and how the audience is responding. How is the sound out in the audience? Is everyone comfortable and having a good time? How is my Spanish? I am so hot that I am sweating under these stage lights and my violin keeps slipping off my shoulder. Can I make this difficult note while my violin is slipping?

Something happy and celebratory.

I honestly don't have one. There are too many great songs in history to pick a favorite.

Noam Chomsky. His intellect is so rare and what he knows and how he thinks really intrigues me.

What do you love doing besides playing the violin?