Rodney Whitaker is associate professor of double bass and director of jazz studies at the Michigan State University College of Music.

Whitaker is one of the leading performers and teachers of jazz double bass in the United States. He is a member of the Lincoln Center Jazz Orchestra, and received national recognition performing with the Terence Blanchard Quintet. Whitaker has also toured internationally as a featured performer with the Roy Hargrove Quintet. In addition, he has appeared and presented master classes at the International Association of Jazz Educators (IAJE) conferences. Featured on more than 100 recordings - from film to compact discs - Whitaker's film score, China, directed by Jeff Wray, was released on PBS in 2002.

In 2006, he was nominated for the Juno Award, Canada's equivalent to the Grammy, for his work on “Let Me Tell You About My Day,” produced by Alma Records

Label: OA2 Records
Released: 2022
Track listing: Each Step; Just One of Those Things; The More I See You; Milestones; What Now?; These Are the Things We Throw Away; Change; Grantstand; Grant's Groove.

Puppets: The Music of Gregg Hill 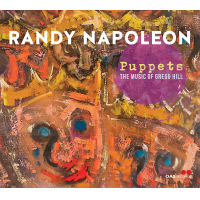 Although his name offers no clue, saxophonist Jordan VanHemert's heritage is Korean. He salutes that legacy on Nomad, his second album as leader, with a pair of Korean folk songs and half a dozen comparatively modern themes written by Koreans or Korean Americans. Most are performed by VanHemert's trio: (Rodney Whitaker, bass; David Alvarez III, drums). ...