He was born in Calais and studied classical violin and composition at the Calais Conservatory. However, his brother Francis made him receptive to forms of music other than the classical and he quit his studies in 1972. Didier was entranced by the improvisation of Jean-Luc Ponty on Frank Zappa's King Kong album and took up the amplified violin. He joined the progressive rock group Magma, touring and notable featured on their 1975 Live/Hhaï album. Lockwood was also influenced by Polish violinist Zbigniew Seifert and Stéphane Grappelli, whom he joined on tour.

He has also played with Quebecois fusion group Uzeb on their Absolutely Live album.

He is famous for exploring new musical environments and for performing various sound imitations on his amplified violin, such as seagulls or trains.

He is married to singer Caroline Casadesus.

Throughout 2006 Didier has been touring with Martin Taylor the Jazz guitarist. In these performances it is noticeable to see that he is very involved in improvisation. 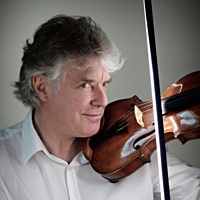 All About Jazz musician pages are maintained by musicians, publicists and trusted members like you. Interested? Tell us why you would like to improve the Didier Lockwood musician page.