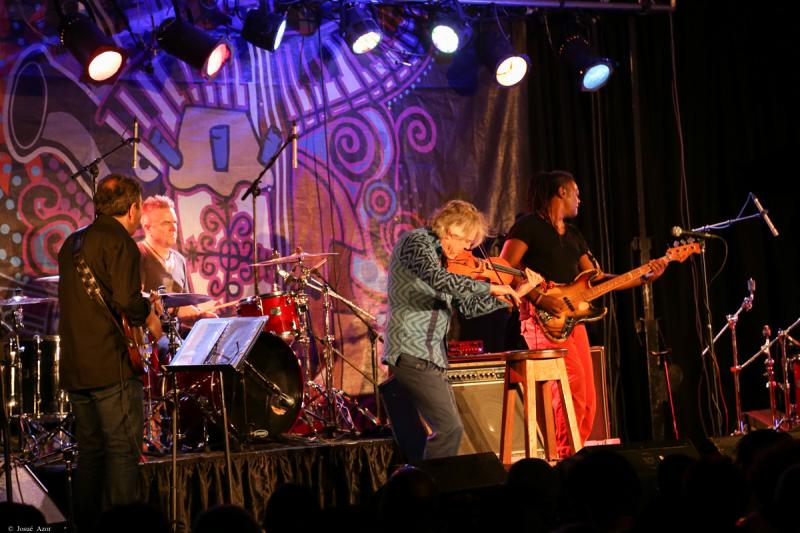 This is a festival that has had to overcome real adversity to survive: one major natural disaster, and many small difficulties in funding and logistics. While it must make do with fewer marquee names than comparable international jazz festivals, it has made a virtue of that limitation, by presenting up and coming artists from all over the world.

In celebration of International Women's Day, Wednesday's concert featured all bands led by women, a first for the festival. Chilean saxophonist Melissa Aldana kicked off the show. Although not literally—she explained that she was not feeling well, and would be seated while performing. She certainly sounded fine to me, with a warm tenor sound reminiscent of Sonny Rollins. In 2013 she was the first female musician and the first South American musician to win the Thelonious Monk International Jazz Saxophone Competition. The opening tune "Concept" (composed by pianist Glenn Zaleski) established a modern, modal sound, which was continued by the second selection. She went "out" briefly during her solo, so she definitely has an exploratory streak. There was a lovely solo saxophone introduction to the ballad feature, which I think was "Bewitched, Bothered and Bewildered." And "Elsewhere" showed off her skills as a composer.

French drummer Anne Paceo led a piano trio called "Triphase" with pianist Leonardo Montana and double bassist Joan Eche-Puig. Paceo is a solid composer, and her sense of time is remarkable. These were grooves so deep you could drive a truck down them, the kind that make you move spontaneously. The trio has recorded two albums: Triphase (Laborie Jazz, 2008) and Empreintes (Laborie Jazz, 2010). Two unambiguously jazz sets in a row, always a nice thing to see at a jazz festival.

Haitian-American singer Malou Beauvoir closed out the concert in grand style. She's really more a pop and funk singer than a jazz one, with large stage pop stagecraft to match. She did sing some standards, beginning with "Lover Man" (a song associated with Billie Holiday) and "You Don't Know What Love Is," as well as more contemporary territory with "This Masquerade." Once again much of the jazz improvisation was provided by her excellent (female) pianist, Yayoi Ikawa. When she brought out guest Haitian vocalist James Germain the music went to another level. He's a powerful duet partner: the African color in his vocal style recalls the great Senegalese singer Youssou N'Dour. 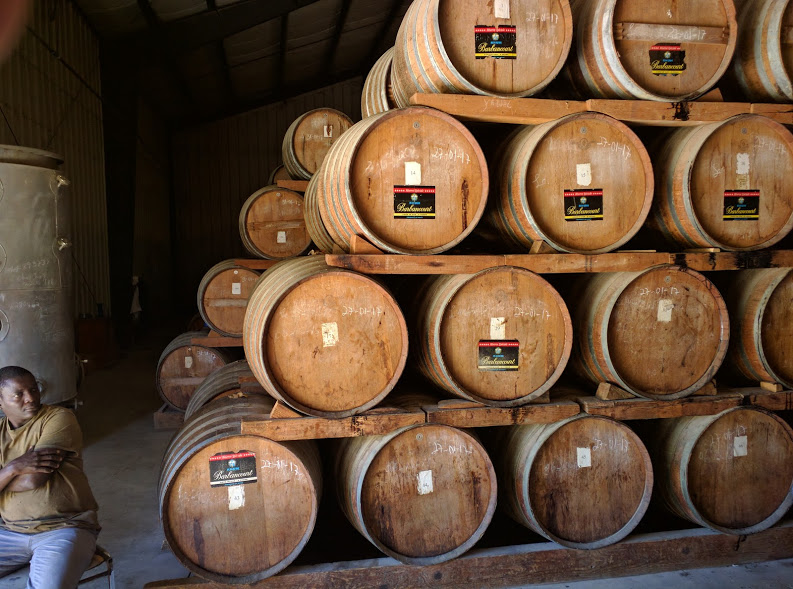 Barbancourt Rum is a longtime festival sponsor, and their distillery is located in Damien, not far from Port-au-Prince, in the midst of a sugarcane plantation. The operation includes everything but bottle and packaging manufacture—they also purchase a large quantity of sugarcane to augment their production. The plant is self-sufficient as much as possible: they even burn the dried cane after juicing to generate electricity. We got to see the entire process, from juicing the cane to extracting the alcohol to distilling and aging. The bottling plant was especially interesting: surprisingly compelling to see the entire line in motion, with empty bottles at one end, full bottles with labels and caps at the other. Crowned by a rum tasting, which also included a sample of unadulterated cane juice.

Thursday's show introduced a group of fresh faces to the festival. Spanish vocalist Veronica Ferreiro took the stage accompanied only by pianist Rueen Garcia. It was a bold move presenting essentially a cabaret act on a large outdoor stage, and a testament to the pair's musicality and showmanship that they succeeded so well. Ferreiro has a wide range, with an especially effective low register—in fact she was just as likely to climax on a low note as a high one. I was reminded of the French singer Edith Piaf, probably only because I lack familiarity with Spanish singers. She sang selections from her two albums in Spanish, Portuguese, and a bit of English. A song about faith with the repeated line "I'm gonna praise you, yes, my lord" had the impact of a Gospel performance. And the saucy "Don't Waste Your Time With Me" presented an opportunity for a spirited audience sing-along. The pair wove the same magic the following night in the noisier setting of the downtown square Place Boyer.

Belgian trumpeter Jean-Paul Estiévenart and his Trio with double bassist Sam Gertsmans and drummer Antoine Pierre played an original program. One tune ended with the band in musical collapse, a free gesture that recalled trumpeter Don Cherry (saxophonist Ornette Coleman's longtime playing partner). "Blade Runner" employed a hypnotic ostinato rhythm, one way for a trio with no chording instrument to achieve a big sound. This is a band that loves to play: they had been frequent visitors at the after hours sessions all week, which gave ample opportunity to hear them play standards. Estiévenart even brought his trumpet to join in with the rara band playing intermission music following their set.

Haitian dance hall singer/songwriter Mikaben (drawing from compas, zouk, funk and hip-hop) brought in a big crowd—complete with a "fan club" screaming and singing along—for a full rock star performance experience. He sings in French, English, Creole and Spanish, and began in English with "Loving My Life." The rest of the set included a power ballad, a ballad on which he accompanied himself on acoustic guitar, and an interesting cover of Bob Marley's "No Woman, No Cry." His show concluded with a big sing-along anthem, evidently a well-known favorite of the home crowd.

Friday night's show took place in the most public setting of the festival, the crowded downtown square Place Boyer. Veronica Ferreiro and Yilian Canizares each played a set (Cañizares had some guests this time, as noted earlier). The final slot was to have featured Mexican guitarist Paco Renteria, who was forced to cancel just days before. His replacement was a huge stylistic change, but a great crowd favorite. Haitian rapper BIC (his real name is Roosevelt Saillant) and his band brought tremendous rock energy to the stage. Clearly a popular Port-au-Prince act, they had the audience waving their arms, dancing, and singing along in short order. BIC had a strong female co-lead singer to bounce off of, and an especially talented lead guitarist.

The After Hours sessions developed from brief shows by the featured performers to active jam sessions over the course of the week. Keyboardist Mike Del Ferro was a regular participant, as was Jean-Paul Estiévenart and members of his trio. Friday night was billed as Gardy Girault & Friends: the Haitian DJ set up beats and samples (including live sampling) and encouraged participation by live musicians. One memorable segment featured singer James Germain; congas, drums, keyboards and horns were also added to the mix at various times. Exciting to hear a DJ who actively promotes improvisation. 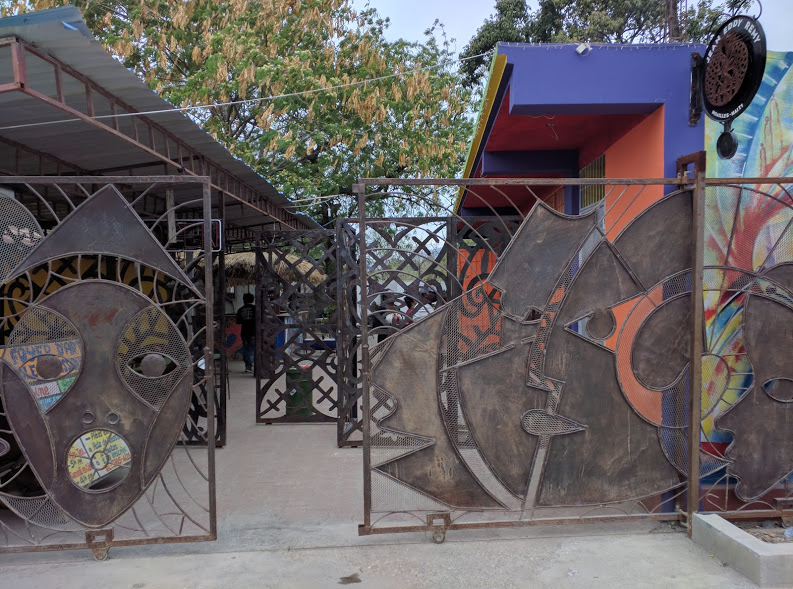 Village Noailles is an iron-working community located in Croix-des-Bouquets (about a 45 minute drive from the city) where oil drums are recycled into decorative objects, jewelry, and pieces of elaborate original art. In the course of visiting the individual artist's studios, the visitor can witness the act of metalworking; the sound of hammering and chiseling is everywhere. This truly is a community, with an active program of apprenticeship and training, and it is still growing. Nice to know that a purchase here gives direct support to the artist.

Saturday's final concert was moved to the indoor venue at the Karibe Hotel—festival organizers were not willing to gamble on the weather a second time. Mexican guitarist Paco Renteria had been scheduled for a second appearance: this time Joël & Mushy Widmaier filled in on the opening slot. Martinique was represented by singer Ronald Tulle ft. Tony Chasseur with a band led by pianist/arranger Ronald Tulle ft. Tony Chasseur and featuring bassist Michel Alibo. The set began with a funk instrumental before Chasseur came onstage. The charismatic vocalist still ceded the spotlight to Alibo, who took a really hot solo on the third tune; and to Tulle, who played a striking unaccompanied piano solo on another instrumental tune built on a moto perpetuo figure. The set came to a climax with Chasseur leading an audience sing-along while walking down the aisle among the audience, which eventually led to a bebop scat vocal, with the rhythm section playing swing.

The festival's closing set was by French fusion violinist Didier Lockwood, leading a quartet with drummer Loic Pontieux, bassist Linley Marthe, and guitarist Olivier Louvel. His dramatic opening tune grew to the kind of climax many artists reserve for the end of their set: a tremendous surge of speed and energy. They moved on to a bossa nova, then to a Duke Ellington cover that featured an unaccompanied looped violin opening, as well as a great guitar solo. Lockwood's ballad "Tiny Twins" included a lyrical bass solo. Lockwood picked up an electric six-string violin for his tour de force, an elaborate solo with a looper. He used the extended bass range to set up ostinato patterns, then layered all manner of sounds on top, including ocean and bird sound effects and the alien call phrase from the film Close Encounters of the Third Kind. Then he walked out into the audience, circulating among them until returning to the stage for the conclusion. That could have been a fitting ending to the set, but the band returned for a final blast of energy, a piece that included several duets among the group members. A terrific ending to the night's music, and to the 2017 Festival International de Jazz de Port-au-Prince.

This is a festival that has had to overcome real adversity to survive: one major natural disaster, and many small difficulties in funding and logistics. While it must make do with fewer marquee names than comparable international jazz festivals, it has made a virtue of that limitation, by presenting up and coming artists from all over the world—and offering the opportunity to hear many of them more than once over the course of the week. It also serves as a showcase for many excellent local musicians, who more than hold their own with the visitors.

And then there's the warm welcome of the Haitian people, and the amazing, contradictory place that is Port-au-Prince. Crowded, colorful, and home to a population finding creative ways to survive in a difficult economy. It's an unforgettable experience, and one I hope to repeat.