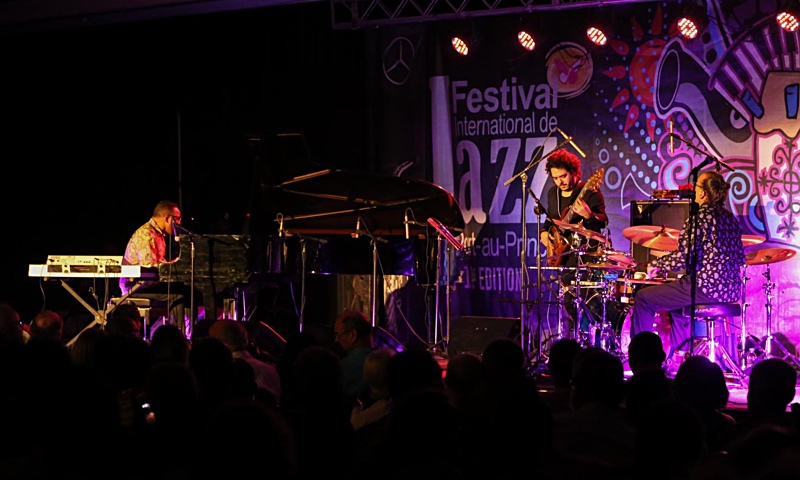 Now in its eleventh year, the Festival International de Jazz de Port-au-Prince has a unique collaborative structure. Every year several of the countries with embassies in Port-au-Prince sponsor an artist, giving the event a distinctly international flavor.

Haiti: the only nation in the world established as the result of a slave revolt; home of Vodou. Haiti: poorest country in the Western Hemisphere; subject to devastating hurricanes and earthquakes. Most potential visitors to Haiti are likely to focus on the second view of the country, especially after the catastrophic 2010 earthquake which caused massive building collapse and loss of life in the capital Port-au-Prince, as well as nearby cities. Despite a strong rebuilding effort there is indeed still ample evidence of the earthquake. There are collapsed buildings in Port-au-Prince, roads in need of repair (as there have always been, due to the poor economy), and even national monuments in downtown's main square the Champ de Mars have not all been fully refurbished. Many of the rebuilt structures have been permanently altered: they tend to have fewer stories, to improve structural integrity in the event of another earthquake.

But Haitians are nothing if not resilient. Driving into Port-au-Prince from the airport, the vibrancy of street life is immediately evident. The first experience of city traffic is unforgettable: narrow streets with few lane markings or street signs, even rarer traffic lights, and motorcycles zipping in and out with little warning. Not to mention keeping an eye out for pedestrians and dogs in the road! It's all a bit alarming at first: a real Third World shock for the First World visitor.

Now in its eleventh year (the fourth year was cancelled due to the earthquake: the foundation that runs it got permission to use their grant funds to support homeless musicians), the Festival International de Jazz de Port-au-Prince has a unique collaborative structure. Every year several of the countries with embassies in Port-au-Prince sponsor an artist, giving the event a distinctly international flavor. The sponsoring country flags are prominently featured in the festival program, and ambassadors often introduce their countrymen from the stage at the concerts. Sponsored artists typically perform at least twice over the course of the festival. Sponsors this year included Germany, Belgium, Canada, Chile, Cuba, Spain, the United States, France, Haiti, Martinique, Panama, the Netherlands, and Switzerland. Many of the concerts are free: this year Monday-Friday were unticketed, five of the eight nights of the festival. 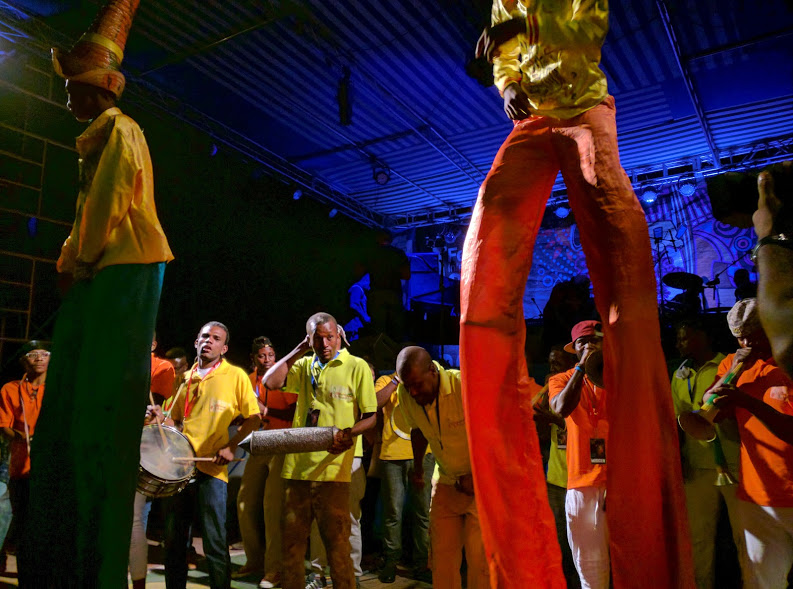 The opening night at the historic Parc Historique de la Canne à Sucre (a former sugarcane plantation) began with a Rara band (which provided intermission music throughout the festival). Rara is Haitian festival music, performed on drums, trumpets made from bamboo or metal pipes, and percussion. It's electrifying: energetic and loud. It did a wonderful job of establishing a sense of place, as well as firing up the crowd, which was encouraged to sing along with the Creole songs that form the repertoire.

The festival opener was Canada's entry, vocalist/pianist Carol Welsman in a trio with guitar and bass. The instrumentation recalls Nat "King" Cole, and so does the breezy swing feel. She opened with "Somewhere Beyond The Sea," then did Willie Nelson's "On The Road Again" as a samba. Excellent support from guitarist Pierre Cote and bassist Rémi-Jean Leblanc. She sang Jobim's "Quiet Nights" in Portuguese—then the rain began to fall. She soldiered on with "Why Don't You Do Right?," a song associated with Peggy Lee (sung with just guitar and bass accompaniment—a nice showcase for the rhythm section), and Monk's "Round Midnight," which included new Creole lyrics that delighted the crowd—and I am told that her pronunciation was excellent. But the set was cut short as the downpour became too much for audience and performers alike. Her performance on Monday was much drier, even though it was also an outdoor venue (there are few suitable indoor venues to choose from in this tropical city). It was a similar set, with the notable addition of a version of "My Favorite Things."

After a few minutes the rain let up, so Haitian-American vocalist Sarah Elizabeth Charles took the stage, joined by guest trumpeter Christian Scott aTunde Adjuah. She opened unaccompanied, a haunting vocalise augmented by live electronics. Her eclectic approach continued after the band entered, including a Haitian folk tune (her father was originally from Port-au-Prince) "Wangolo Wale," and a reggae tune. After "Face of Fun" (the title tune from her forthcoming album) she began "Amarita," a politically-charged song setting words by poet Maya Angelou. But the downpour resumed to such an extent that the set had to be cut short. The weather was so inclement that headliner Panamanian pianist Danilo Pérez was unable to take the stage. Fortunately there was an After Hours session, so he and his band were able to play a short set in a more intimate setting, with Pérez playing an electronic keyboard in place of his usual grand piano. They began with "Elegant Dance," continuing with other selections from his "Suite for the Americas." Not really a substitute for a full set, but much better than a complete cancellation.

Sunday evening's concert began with German pianist Sebastian Schunke and his Berlin Quartet (bassist Marcel Krömker, drummer Diego Pinera, and saxophonist Danielle Freeman). The set opened rather abstractly, with Freeman really wailing on soprano saxophone. There was a montuno pattern, but the music took place at an intersection between Latin and modern jazz—a lengthy piano/drum duet closed the tune out with a sustained energy blast. Other material moved into a more mainstream Latin groove. "Ella" from his latest album Genesis, Mystery And Magic (Nwog Records, 2014) is about his young daughter, who he described as "wired." "Oma Mutti" came from Back In New York (Connector Records, 2008), an album featuring the great Paquito d'Rivera on clarinet which Schunke described as "a dream come true." The group's set on Monday was similar, but demonstrated the flexibility in the arrangements. A fascinating take on Latin jazz, incorporating generous amounts of modern jazz style.

Haitian-American singer Vanessa Jacquemin has a style with many elements. The strongest is the samba that comes from her years in Brazil (there's even a Brazilian percussionist in her band), followed by the Parisian jazz scene. French guitarist Alex Jacquemin was the linchpin of the group, a fusion guitarist with tremendous chops. Completely supportive most of the time, but capable of taking the spotlight when required. The first appearance of pop music in the festival—albeit with a jazz flavor—with more to come.

Cuban pianist Gonzalo Rubalcaba made his first Haitian appearance with his Volcan Trio (electric bassist Armando Gola and drummer Horatio "El Negro" Hernandez). It was a bravura performance in every sense. Rubalcaba is a virtuoso, and his group is more than capable of keeping up with him every step of the way. Which is not to say that it was all about flashy technical display. He paused to play an elegant Cuban danzón, which is a slow, formal partner dance. And the band revisited his original "La Nueva Cubana" from the repertoire of Projecto, his first band. A rousing conclusion to the second night of the festival.

The National Museum is a remarkable place, full of historical objects and art that tell the story of the country going back to before independence. There's even one of the Goodwill Moon rocks, presented to the country by U.S. President Richard Nixon after the Apollo 11 mission. But perhaps the most striking exhibit is the one devoted to Haiti's many Presidents—ranging from President for Life to several who were only in power for a few months. It's a completely unvarnished view of Haiti's often turbulent political history—warts and all. 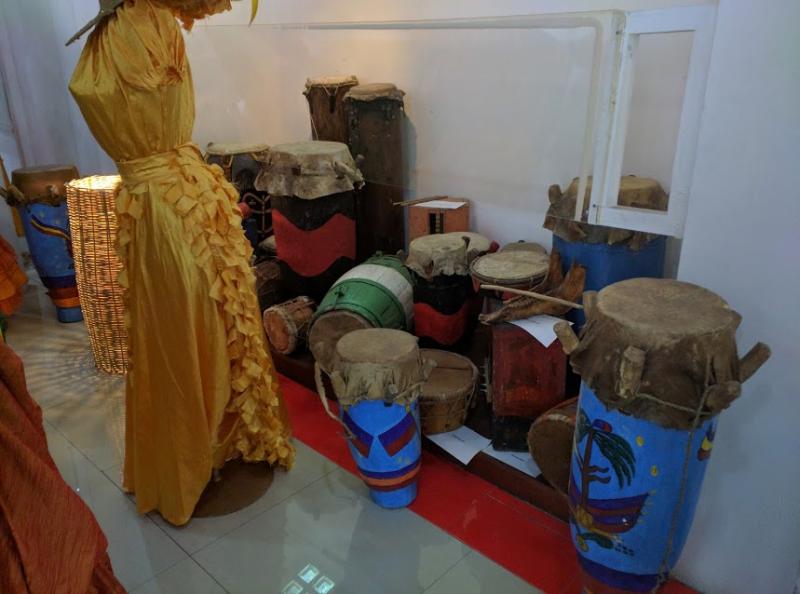 Across the street, the Museum of Ethnology celebrates Haiti's vernacular traditions, especially vodou. Drums and altars used in vodou ceremonies are on display, as well as Carnival costumes. The day's tour concluded at the famous Hotel Oloffson, known for being the setting of Graham Greene's novel The Comedians. A wonderful bit of history, apparently unaffected by the earthquake.

Dutch pianist Mike Del Ferro opened Monday night's concert, accompanied by a Haitian rhythm section of bassist Richard Barbot and drummer John Bern Thomas. He had already made a substantial contribution to the festival by ceding his after hours slot to Danilo Perez on Saturday night after the rained out concert at the main stage. He has played all over the world, and his cultural references are broad. He began with a Neopolitan song, then played a Jobim tribute utilizing two songs from his deep repertoire that are rarely played: "Olha Maria" (played unaccompanied) and "Chovendo na Roseira" (a ballad with the rhythm section). "Either Of Us" had a driving rhythm reminiscent of its inspiration in Senegal.

Tuesday night introduced a fresh group of artists. American vocalist Halie Loren won an Independent Music Award for her first album They Oughta Write a Song (White Moon, 2008). Her repertoire includes jazz standards, pop tunes, and originals. At first blush she sounds more like a pop singer than a jazz one. Yet she did a convincing job on Nina Simone's "Feeling Good" and Etta James' "I'd Rather Go Blind," and her version of "Bye, Bye, Blackbird" included the rarely sung verse. Pianist Ariel Pocock provided much of the jazz improvisation, and (unusually) also occasionally sang backup vocals, even performing a scat duet with Loren on "Blackbird." The set also included Jobim's "Waters of March" and a samba version of Duke Ellington's "It Don't Mean a Thing (If It Ain't Got That Swing)."

Brothers Joël & Mushy Widmaier were the first purely Haitian act of the festival. Mushy is a pianist, composer and arranger; Joël is a songwriter-composer, drummer, percussionist and singer. After years of fusing rock, pop, jazz fusion, konpa and traditional Haitian music, they created what was called the New Generation style with ZÈKLÈ, a group that was popular for ten years, touring internationally. It's an energetic, jazz fusion sound, rich with percussion (timbales, congas, and drum kit). But the opening tune had some traditional jazz flavor in the form of scat singing and a little walking bass. The second piece was an instrumental with a hot Latin groove. Joël sang a ballad which got an immediate response from the crowd—clearly one of the group's past hits, it also featured a fine bass solo and call-and-response between voice and synthesizer. Voice and synthesizer paired again for a fast tune strongly reminiscent of Weather Report. The closing tune included a vodou chant and both percussionists on congas, an evocation of the sound of a vodou rite. An exciting end to a dynamic set. The brothers made an unexpected, but welcome return on the final night filling in for a last-minute cancellation.