Davis is one of those 1950s stories of the creative guy with chops who was simply lost amid a sea of similar musicians. It's a pity. 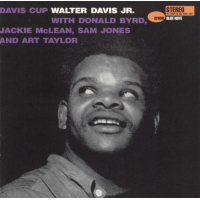 Every now and then, I hear a musician in a band and I think, "Damn, can we get rid of the other guys and just hear this one by himself?" That was my immediate thought after listening to Davis Cup, a hard bop cooker from 1959.

Walter Davis Jr. is a pianist with a slim discography. He recorded exactly one Blue Note CD as a leader—this one, his debut—and appeared mostly as a sideman on other people's records. The mystery is why he didn't achieve more with his considerable talents.

On Davis Cup, he sounds an awful lot like Thelonious Monk. No surprise there, since Monk was making some remarkable, groundbreaking stuff in the late 1950s. Lots of pianists wanted to be Monk in 1959, and it's no slam on Davis that he clearly shows the influences.

Here we have Davis on piano surrounded by a pretty routine Blue Note bunch: trumpeter Donald Byrd, saxman Jackie McLean, bassist Sam Jones and drummer Art Taylor. It's a typical Blue Note affair, with five bluesy bop romps and a sweet ballad that sounds hauntingly like Monk's "Reflections" or "Pannonica." While I love 1950s Blue Note hard bop, this one comes off as rather ordinary and predictable. What is not predictable is Davis himself. He wrote all six songs, and that by itself is intriguing. More tantalizing are his brief solos. I wish there were more. The horns are nice, and Byrd seems particularly inspired here, but it's the piano that makes me yearn for more.

My personal favorite is "Rhumba Nhumba," partly because of its punny title, but mainly because of its catchy tune. Honorable mention: "Minor Mind," a toe-tapper with nice piano work and soulful playing from the horns.

Davis played for a short time with the Jazz Messengers, in two separate stints, and recorded a few albums for obscure European labels. Based on this debut, I'd like to hear them. Unfortunately, Davis seems to be one of those 1950s stories of the creative guy with chops who was simply lost amid a sea of similar musicians. A pity.