In the Hollywood film “Ray,” Ray Charles, played by Jamie Foxx, goes to a nightclub to see legendary Toledo jazz pianist Art Tatum played by Johnny O’Neal. During filming, O’Neal played three or four songs, although only one “Yesterdays” made it to the silver screen. “That was a real honor for me, and for Toledo audiences, to play the part of Tatum—one of the greatest pianists ever.” A lot of people asked Johnny what Tatum record he was playing along with. “I was playing live! That was me,” he said. Following the success of “Ray”, the Ray Charles Band asked Johnny to take the piano chair for its major venue tour in 2005

Pianist Johnny O'Neal is extraordinary, even if he isn't as well known as other pianists around today. Influenced by Art Tatum and Oscar Peterson, O'Neal began as a gospel pianist in his home town of Detroit and spent the 1970s in Birmingham, Ala., working with local jazz musicians. In 1981, he relocated to New York to ...

You've Got a Friend - Happy Birthday to Carole King!

This broadcast fell on the day of the Grammy awards and included new releases from vocalists Catherine Russell and Tierney Sutton respectively, composer Miho Hazama, pianist Beegie Adair and trombonist Jennifer Wharton, with birthday shout outs to Natalie Cole, Anne Marie Moss, plus a few jazz treatments of songs by Carole King in the fourth hour ... 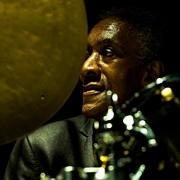 Newk with Bud, a Trip in the Way-Back Machine & More

We start with our usual dose of twenty-first century music (Marsico should be better known in the States!). And there's a quiz for you in tracks two and three; so pay attention! Then, it's 19-year-old Sonny Rollins with Bud Powell from '49, followed by a walk in the Fall air where the original French ...

Celebrating mid-October birthdays with songs by pianist/composer Roy Kral, who with his wife vocalist Jackie Cain formed the duo group Jackie & Roy, and also Thelonious Monk a year after his centennial. Also remembering songwriter Carol Hall (1936-2018) best known for the Broadway musical The Best Little Whorehouse in Texas, but who also contributed lyrics to ...