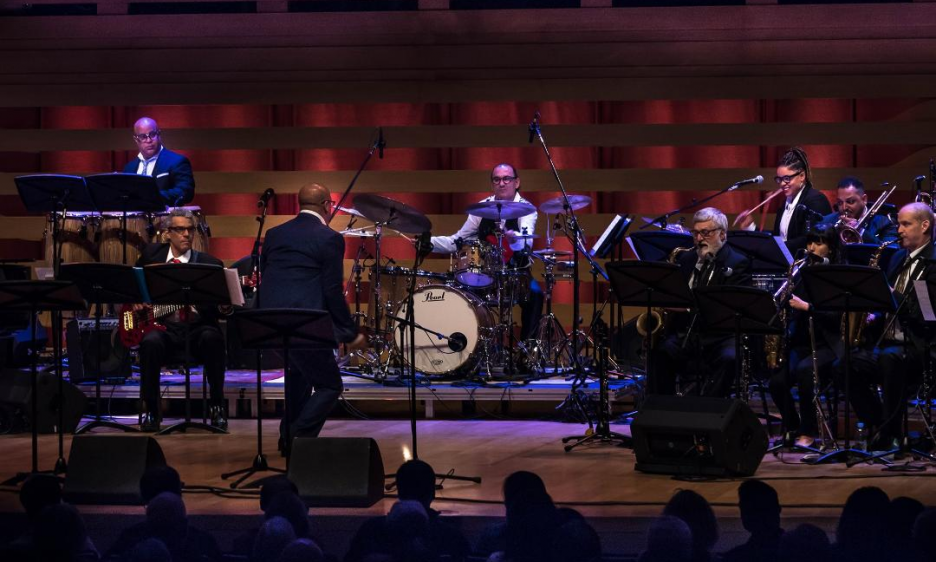 A "dream concert" is how Hilario Duran characterized the show featuring his Latin Jazz Big Band and the great drummer Horacio "El Negro" Hernandez. Cuban-born piano great Durán settled in Canada in the mid-nineties and has continuously broadened the horizons for many concerning the rich musical traditions permeating Cuba. This performance was a perfect example of an educational showcase with fresh, original compositions and arrangements. At an early age, Durán played montunos and tumbaos and these influences came alive this evening in his melodic piano style.

A piano introduction accompanied eventually by drums opened the evening, followed by Emiliano Salvador's "Angélica," a classic Cuban tune. "Rumba y Tumbao," a nod to Dámaso Pérez Prado and Bebo Valdes, encapsulated rhythms such as rumba, cha-cha, and bembé. The piece was well-balanced while always maintaining an engaging intensity. Juanito Márquez was ahead of his time as an arranger in Cuba starting in the '60s. In his homage, Durán selected "Pacá Por Juanito," an upbeat piece with a complex tumbao rhythm. Following "Danzón Farwell (Danzón de la Partida)" from the album Contumbao (Alma Records, 2018), Durán dedicated the final two pieces of the first set to Chucho Valdes. Both have shared mutual respect and admiration for many years. Dance members from The Sarita Leyva & Iré Omó Afro-Cuban Drum and Dance Ensemble as well as singers contributed to the fun and engaging close with "Bebo." "Misa Negra," originally a symphonic orchestral piece by Valdés, was punctuated by singing and brief solos on flugelhorn, tenor saxophone, and piano—with a lovely reference to Chopin.

The second set opened with an upbeat version of "Cry Me A River (Llora Como Yo Lloré)" by Arthur Hamilton, featuring vocalist/electric violinist Elizabeth Rodriguez and the enthusiastic dancers giving the vibe of a fun salsa night. Things then quietened down a notch with César Portillo's bolero "Tú Me Delirio." Celia Cruz's influence came alive with "El Yerberito (The Herb Vendor)" by Benny Morton, following the tradition of town criers or street vendors known as "pregoneros" singing street cries known as "pregónes" to promote their products or stand out in a marketplace. Moving into the final rumba stretch, Durán introduced the vibrant "El Tajonero" by Jesús Alfonso Estilo. The tunes were mainly based on careful arrangements, with only a few brief solos besides the bandleader himself.

The evening concluded with spirited renditions of "Rumba De Cajón Lekeleke" and "Blem Blem Blem." The audience was on their feet. The all-star band provided a solid education in the rich traditions constituting Cuban music.