Lena Horne, the beautiful, elegant, talented singer and actress has become a legend. Her strong sense of her own identity, of justice, and of dignity forced her to struggle against social adversity, and allowed her to triumph. Music is just a part of her story. Lena Mary Calhoun Horne was born on June 30, 1917, in the Bedford-Stuyvesant neighborhood of Brooklyn, New York, her parents separated by the time she was three years old, and she lived for several years with her paternal grandparents. Her early life was nomadic: Horne's mother, who was a fairly unsuccessful stage performer, took the young Lena on the road with her, and they lived in various parts of the South before returning to Horne's grandparents' home in Brooklyn in 1931 Horne had early ambitions to be a performer--against the wishes of her family, who believed that she should aspire to greater heights 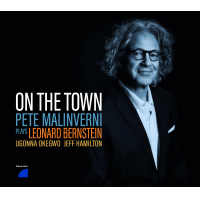 The presumptive title of this release is On The Town, but in reality it covers more than just the music from that titled 1944 Leonard Bernstein Broadway musical. The ever thoughtful and vivid pianist Pete Malinverni along with his savvy and accomplished companions bassist Ugonna Okegwo and drummer Jeff Hamilton have made this release an oeuvre ...

As a teenager in central New Jersey, our newest Super Fan, Jack DiMonte, started listening to a twice-weekly all-Sinatra radio show and, without even realizing it, absorbing the music and lyrics of the Great American Songbook. Moving to New York as an actor, he soon found himself luxuriating in the city's vibrant jazz and cabaret scenes. ... 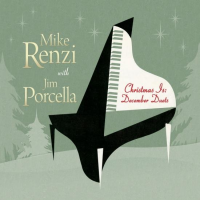 Now here's some music to cozy up to. You can almost feel the warmth of a fire place, smell some spruce and pine, see the falling snowflakes and taste the heaven of hot chocolate in these sounds. Master pianist Mike Renzi, a septuagenarian mainstay of the vocal community whose work has supported everyone from Mel Torme ...