Elvin Ray Jones was a jazz drummer. He was born in Pontiac, Michigan, the youngest child in a family of ten. His father worked for General Motors. Two of Jones' brothers were also jazz musicians: Hank (piano), and Thad (trumpet/flugelhorn). Elvin began playing professionally in the 1940s, working with the Army Special Services program, Operation Happiness, and in 1949 had a short-lived gig in Detroit's Grand River Street club. Eventually he went on to play with artists such as Charlie Parker, Miles Davis, and Wardell Gray. In 1955, after a failed audition for the Benny Goodman band, he found work in New York, joining Charles Mingus's band, and releasing a record called J is for Jazz. In 1960, he joined with the classic John Coltrane Quartet, which also included bassist Jimmy Garrison and pianist McCoy Tyner. Jones and Coltrane often played extended duet passages, both giving and taking energy through their instruments

When Diane Robertson moved into LA's Leimert Park neighborhood (the cultural center of Black Los Angeles), she knew she wanted to do something to celebrate the community and bring the people together. So, in 2015, she organized the first Sutro Avenue Summer Soiree. But after a great deal of thought and hard work, in 2020 Robertson, ...

All About Jazz is celebrating Elvin Jones' birthday today! Elvin Ray Jones was a jazz drummer. He was born in Pontiac, Michigan, the youngest child in a family of ten. His father worked for General Motors. Two of Jones' brothers were also jazz musicians: Hank (piano), and Thad (trumpet/flugelhorn). Elvin began playing professionally in the 1940s, ...

At the start of September 2021, trumpeter Terence Blanchard released Absence (Blue Note), dedicated to saxophonist and composer Wayne Shorter, who for health reasons had recently been obliged to retire from performing, at least temporarily. Some people celebrating their eighty-eighth birthday, as Shorter did the previous month, might not welcome being the dedicatee of an album ... 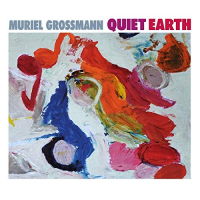 Anyone familiar with Tibetan Buddhism will know that once their spiritual leader or Dalai Lama dies, officials set off in search of his reincarnation, interviewing and examining potential postulants. Listening to Quiet Earth by Austrian saxophonist Muriel Grossmann one cannot help but ask if she might be the reincarnation or avatar of the late John Coltrane. ...

Quite often it's not so much the music itself that compels you to sit and listen but the feeling the music stirs within. You begin to recall moments from the past that have made you feel of a certain place and time when things were just a bit more either out there or, as in the ...