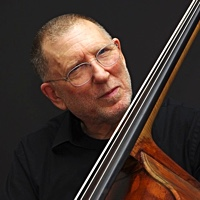 Israels’ charts are the heart of his band’s personality. It is definitely not a band that clubs you into submission. It is mellow, subtle, highly melodic, with lines that move in wondrous ways.
—Ira Gitler, DownBeat

Bassist and composer, Chuck Israels was raised in a musical family. His step-father, Mordecai Bauman is a singer who performed extensively with composer Hanns Eisler and who, along with Chuck's mother, Irma Commanday, created a home environment in which music was a part of normal daily activity. Paul Robeson, Pete Seeger and The Weavers were visitors to the Bauman home and the appearance of Louis Armstrong's All Stars in a concert series produced by his parents in 1948 gave Chuck his first opportunity to meet and hear jazz musicians.

Chuck studied the cello and played guitar in junior high school. Later musical training took place at Indian Hill, a summer workshop in the arts directed by his parents and at the High School of Performing Arts in New York City. A year at Massachusetts Institute of Technology provided access to the considerable jazz activity in Boston where Herb Pomeroy, Charlie Mariano, Joe Gordon, Serge Chaloff and bassist John Neves were among the many musicians who lived and performed regularly in the area. Chuck took up the bass in order to fill out the M.I.T. orchestra and soon found a demand for his abilities in the Boston jazz scene. The year at M.I.T. convinced Chuck that a career in engineering was not for him and motivated a transfer to Brandeis University where he continued his studies in music.

While at Brandeis, Chuck played in a trio with pianist Steve Kuhn, who was then at Harvard and Arnold Wise, a drummer studying at the Massachusetts School of Art. A concert at Brandeis which involved the participation of jazz musicians Art Farmer, Jimmy Knepper, Barry Galbraith, Bill Evans, Joe Benjamin and composers Gunther Schuller, George Russell and Charles Mingus, presented Chuck with the opportunity to meet and perform with musicians who later provided entre into the New York jazz scene.

While still in college, Chuck performed with Coleman Hawkins and Billie Holiday and recorded with John Coltrane and Kenny Dorham. Parts of the summers were spent at the Lenox School of Jazz where The Modern Jazz Quartet, Jim Hall, Bob Brookmeyer, Gunther Schuller and others, made significant contributions to Chuck's education. Frequent trips to New York provided more opportunities to hear and play with well known musicians, and the virtuoso bassist, Oscar Pettiford, became a friend and mentor.

A year in Europe in 1959 found Chuck performing with Bud Powell, Kenny Clarke and Lucky Thompson as well as with European musicians such as Martial Solal and Daniel Humair. Returning to New York, Chuck found work in George Russell's experimental sextet as well as occasional jobs with Gunther Schuller in which Eric Dolphy also participated. A short stint with a Benny Goodman band gave Chuck a chance to work with Zoot Sims.

In 1961, on returning from another European tour which involved a recording with Eric Dolphy, Chuck was asked to join the Bill Evans Trio, filling in the role vacated by the tragic accidental death of bassist Scott Lafaro. The next five years proved fruitful to Chuck's musical development and a strong relationship was built within the trio. Drummers Paul Motian and Larry Bunker were creative partners and an interactive ensemble style, already started by a number of the New York rhythm section players of that time, was further developed. More opportunities presented themselves to perform and record with J. J. Johnson, Stan Getz, Gary Burton, Jim Hall, Herbie Hancock, Donald Byrd, Hank Mobley, Tony Williams, Roy Haynes, Sonny Clarke, Bobby Timmons and Roland Hanna, among others.

In 1966 it became clear that knowing only the bassist's role in the music was insufficient. That meant getting off the road and staying in one place in order to study composition and arranging with Hall Overton. Chuck found work in the studios and theaters in New York, eventually becoming the conductor of a Broadway show.

Frustration with commercial music and diminishing opportunities to perform at the creative level set by the Bill Evans Trio, led to two decisions that set the pattern for the next period of Chuck's work. Teaching music at the university level provided a way to make a living while maintaining the necessary freedom to pursue creative activity, and the creation of a jazz repertory orchestra provided the specific outlet for that activity for the next few years. The process of transcribing classic Ellington charts for the National Jazz Ensemble had a profound effect, and durable relationships grew among many musicians involved in that activity. The ensemble performed classic jazz compositions and new pieces commissioned especially for it, written by Chuck and other jazz composers like David Berger. David, the National Jazz Ensemble's assistant director, continues to do similar work and has found more support and a wider audience as a result of his subsequent association with Lincoln Center and Wynton Marsalis. (The recordings made by the National Jazz ensemble during that period have recently been released on CD by Chiaroscuro Records.)

A move to California in 1981 was prompted by a job with the San Francisco Opera Company for Chuck's wife, soprano Margot Hanson. Most of the time in the Bay Area was spent writing arrangements and compositions for big bands and for a nine piece group which provides the color and impact of an organized ensemble while maintaining some of the flexibility of small group playing that remains part of the heritage of the Bill Evans Trio. This repertoire, along with some compositions for smaller ensembles forms the basis for the music that Chuck Israels is now performing.

In 1986, Chuck moved to Bellingham to assume the position he now holds as Director of Jazz Studies at Western Washington University. He continues to write, and perform, as opportunities present themselves. There are performances with Barry Harris, in New York, Europe and Japan as well as composing/conducting engagements with various European Jazz Orchestras. A concert/recording took place in Holland of Chuck's music with the Metropole Orchestra in April, 1996, under Chuck's direction (The Eindhoven Concert - Azica Records). Activities during the last two years have included more performances and recordings with Barry Harris, performances at the Michigan State University Jazz Spectacular with Rodney Whitaker and members of the Lincoln Center Jazz Orchestra, and the CD release of the orchestral material recorded earlier by the NDR and the Hannover Radio Philharmonic on Mood Records.

Among Chuck's many recordings, some outstanding ones include: Coltrane Time, with John Coltrane; My Point of View, with Herbie Hancock; Getz au Go-Go, with Stan Getz; and many recordings with the Bill Evans Trio, including The Town Hall Concert; The Second Trio; Trio '65; Live at the Trident; Time Remembered;and Live at Shelley's Manne Hole. "The Bellingham Sessions, Volumes I and II" are his most recent small group releases as a leader (Audio Ideas Recordings). The Eindhoven Concert on Azica Recordings with Claudio Roditi as trumpet and flugelhorn soloist with The Metropole Orchestra is a representative example of Chuck's writing for that ensemble. Show less

Last night was one of those occasions on which an audience’s concentration and approval is palpable well beyond its applause. We were feeling what the musicians felt in the profundity, beauty and joy of Evans’ music." —Doug Ramsey, artsJournalBlogs

"Israels’ charts are the heart of his band’s personality. It is definitely not a band that clubs you into submission. It is mellow, subtle, highly melodic, with lines that move in wondrous ways." —Ira Gitler, DownBeat

All About Jazz musician pages are maintained by musicians, publicists and trusted members like you. Interested? Tell us why you would like to improve the Chuck Israels musician page.