Born in Kansas City, Counce studied violin and tuba early on before settling on the string bass. He went on the road when he was 16, playing with the Nat Towles Band in Omaha. After some freelancing, Counce moved to Los Angeles in 1945, working with Johnny Otis and making his recording debut the following year with Lester Young.

During the ‘50’s he was a key member of the West Coast jazz scene, recording as a sideman with Shelly Manne, Lyle Murphy, Teddy Charles, Clifford Brown, and many others.

In 1956, Counce organized a quintet comprised of trumpeter Jack Sheldon, tenor saxophonist Harold Land, pianist Carl Perkins, and drummer Frank Butler. During a 15-month period, they recorded enough material to document their endeavor, all of which were originally released by Contemporary and fall stylistically between West Coast cool jazz and hard bop.

With slightly different personnel, the Curtis Counce Quintet recorded a final album for the Dooto label before breaking up in 1958. The bassist continued working in the Los Angeles area until his premature death in 1963 from a heart attack.

“The Complete Studio Recordings; The Master Takes,” has been issued by Gambit in 2006 as a compilation of this bassists recordings. There is an excellent review on this collection by Samuel Chell here at ‘all about jazz.

Hot Track: A Fifth for Frank 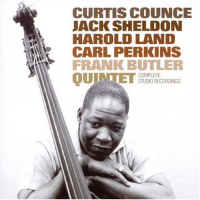 All About Jazz musician pages are maintained by musicians, publicists and trusted members like you. Interested? Tell us why you would like to improve the Curtis Counce musician page.