Born September 23, 1928 in Cincinnati, Ohio, Frank Benjamin Foster III began his long musical career at age eleven, when he took up the clarinet. Two years later he began playing alto saxophone, advancing technically to the point of performing with local dance bands at age 14. He began to compose and arrange at 15, and led his own 12- piece band while still only a senior in high school. Foster attended Wilberforce University, then left for Detroit in 1949 (with trumpeter Snooky Young) where he played with such local musicians as Wardell Gray. Upon finishing his military service in 1953, Foster joined Count Basie's big band (replacing Eddie Lockjaw Davis) on the recommendation of Ernie Wilkins

John Richmond, Allen Farnham, Bill Moring, Steve Johns The Turning Point Cafe Piermont, NY June 7, 2021 The return of Monday night jazz at The Turning Point Café felt like good old times. The series has been running since 2007 and the last date was March 9, 2020. In addition to ...

Award-winning baritone saxophonist Claire Daly isn't blowing her own horn on Rah! Rah! (well, she is, but more about that in a moment)--she's saluting one of her musical inspirations, the late Rahsaan Roland Kirk, a once-in-a-blue- moon talent who left us far too soon. Kirk, who lived only forty-two years, was quite literally a multi-instrumentalist, often ...

Francis Ford Coppola's Vietnam war film, Apocalypse Now, was released in 1979. After sitting for 2 and ½ hours, a viewer might have hoped for theater management to stand at the exits to hand out pamphlets explaining what had just gone down. The conflict had ended 4 years prior, and most war movies, pre- Vietnam, were ...

Trumpeter Derrick Gardner, a Chicagoan who has performed around the world with a who's who of jazz luminaries from Count Basie, Dizzy Gillespie and Frank Foster to Nancy Wilson, Tony Bennett and Harry Connick Jr., to name only a few, traveled to Winnipeg, Canada, to assemble and record his Big Dig! Band, several sizes removed from ... 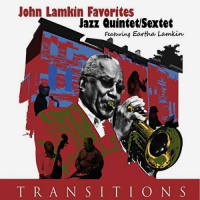 Dr. John R. Lamkin, II has dedicated much of his career to bringing music to students and the community while recording little, so his many Mid-Atlantic fans will welcome Transitions, his first release in decades. His only prior album was Hot (Self-Produced, 1984), where the trumpeter wrote all but one composition. As Director of Bands and ...