Nels Cline is one of the most versatile, imaginative and original guitarists active today. Combining breathtaking technique with an informed musical intelligence, Cline displays a mastery of guitar expression that encompasses delicate lyricism, sonic abstractions, and skull-crunching flights of fancy, inspiring Jazz Times to call him, “The World’s Most Dangerous Guitarist.”

Born in Los Angeles in 1956, his earliest musical influences included Jim “Roger” McGuinn, Jimi Hendrix, Jeff Beck, John Fahey and Duane Allman. Later these giants as well of those of jazz, jazz/rock, punk and the improvising avant-garde twisted his head around. Cline claims his most valuable music training came from his work with bassist/multi-instrumentalist Eric von Essen, with whom he performed as a duo from 1977 until von Essen’s untimely death in 1997.

In the late 1970s, Cline played in the chamber-jazz group Quartet Music with his brother, percussionist Alex Cline, violinist Jeff Gauthier and bassist von Essen. Quartet Music recorded 4 albums and toured extensively, a 12 year run that was highlighted by two performances in 1989 with the Milwaukee Symphony for which Nels arranged several of his compositions. Clines’ 1987 Enja release, Angelica, which added New York City altoist Tim Berne to a roster of longtime Cline collaborators Alex Cline, Stacy Rowles, Eric von Essen, is a fine example of his work from this period.

In addition to The Nels Cline Singers, his current projects include a 6-piece ensemble called Destroy All Nels Cline, The Inkling quartet with bassist Mark Dresser, drummer Billy Mintz and harpist Zeena Parkins; and an improvising acoustic guitar trio with Rod Poole and Jim McAuley. Nels especially enjoys collaborating with other musicians a duo format.

From: Resonant Bodies
By Nels Cline

From: Entity
By Nels Cline 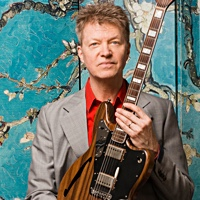 All About Jazz musician pages are maintained by musicians, publicists and trusted members like you. Interested? Tell us why you would like to improve the Nels Cline musician page.