The career of the late Sonny Sharrock is unique in modern jazz. He first aspired as a doo-wop singer, determined to take music as his vocation after listening to Miles Davis' "Kind of Blue." Aspired to play saxophone but instead took up guitar in his early 20's due to asthmatic conditions, nonetheless he emulated his guitar styling after the energy players such as Coltrane and Pharaoh Sanders. He appeared as a cameo in Mile Davis' "Jack Johnson" album and Wayne Shorter's "Super Nova" album as well. His most notable appearance was his duel with Sanders on "Taulid" and "Izipho Zam." His primal tone with gusto was indeed a one-of-a-kind. Although his didn't employ massive distortion to create the full-on blast, Sharrock's buzz saw lines with slamming dissonant chords were definite a character in the late '60s free jazz scene.

After playing free jazz with Pharoah Sanders, while he was playing funk-jazz with Herbie Mann, guitarist Warren "Sonny" Sharrock recorded three albums with his wife Linda Sharrock's wordless vocals: “Black Woman,” ( 1969), featuring the first version of his signature tune “Blind Willy,” “Monkey-Pockie-Boo,” (1970), possibly his most personal album; and Paradise (1975), introducing electronic keyboards in the sound of the couple and emphasizing Linda's vocal workouts, an avant-funk experiment that predated the new wave of rock music. The background of his guitar playing was fundamentally the blues, but at the same time he displayed a loud, aggressive, feedback-laden, quasi heavy-metal technique.

For six years Sharrock did not make a single record. It was bassist Bill Laswell, a protagonist of the new wave, who rediscovered him for Material's “Memory Serves.” (1981) “Dance with Me Montana,” (1982), not released until 1986, contained embryonic versions of his classics.

Laswell also organized Last Exit, an avant-funk quartet with Sharrock, German saxophonist Peter Brotzmann and drummer Ronald Shannon Jackson that played virulent jazz- rock, influenced by both the brutal edge of punk-rock and the cerebral stance of the new wave. Laswell was the brain, but Sharrock was the epitome: Last Exit played the kind of loud, savage jazz-rock and free jazz that Sharrock had pioneered. The catch, of course, was that Laswell had put together four mad improvisers, ranging from the cacophonic Brotzmann to the hysterical Sharrock to Laswell's dub bass. “Last Exit,” (1986) was a set of totally improvised jams, with frantic peaks, but pale in comparison with the live “Koln.” (1986) The other Last Exit live recording, “The Noise of Trouble,” (1986) was a humbler study in contrasts.

Sharrock overdubbed himself for the solo “Guitar,” (1986), achieving both his most challenging technique and emotional pathos. He then partnered with rock bassist Melvin Gibbs and drummer Pheeroan Aklaff for “Seize the Rainbow,” (1987) that attempted a fusion of heavy metal and fusion jazz.

In the meantime, Last Exit's punk-jazz achieved a different kind of intensity on “The Iron Path,” (1988) a set of ten short pieces, and the live “Headfirst Into The Flames.” (1989)

A quartet with two free-jazz veterans, Pharoah Sanders and Elvin Jones, on “Ask the Ages,” (1991) restored Sharrock's status as a unique guitarist and composer and pushed it to new insane heights. This is Sonny Sharrock's masterpiece, and sadly it was also the last album he would record before his premature death in 1994. 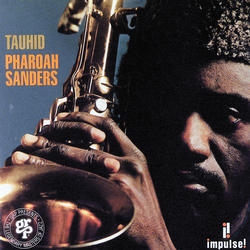 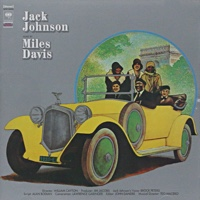 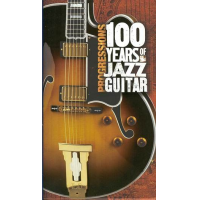 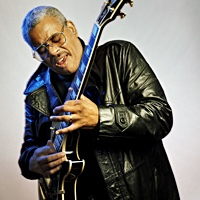 All About Jazz musician pages are maintained by musicians, publicists and trusted members like you. Interested? Tell us why you would like to improve the Sonny Sharrock musician page.