Home » Jazz Articles » Summer Of Soul (...Or, When The Revolution Could Not Be Televised)

By Ian Patterson
August 5, 2021
Sign in to view read count 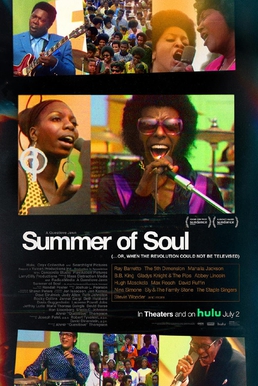 Various Artists
Summer Of Soul (...Or, When The Revolution Could Not Be Televised)
Onyx Collective/Searchlight Pictures
2021

One of the most thought-provoking moments in Ahmir 'Questlove' Thompson's documentary on the 1969 Harlem Cultural Festival comes from a festival attendee, looking back from the distant perspective of half a century. "I had never seen so many black people before," he recalls, still awestruck, all these years later, at the memory of 50,000 black people gathered in Mount Morris Park, Harlem, to enjoy the best of black music.

The Harlem Cultural Festival—held over six Sundays from June 29 to August 24, 1969—brought together 300,000 black people in total.

How often did fifty thousand black men women and children get together in one place to celebrate their musical culture and identities? Perhaps for this reason as much as any other, the crowds enjoying the music at the Harlem Cultural Festival exude a joyous, prideful atmosphere. Black and beautiful. Black and proud. These are the mantras that run through the film like chants.

The music captured is stellar. Gladys Knight and the Pips, B.B. King, Sly and the Family Stone, Mahalia Jackson, Stevie Wonder, The 5th Dimension, Staple Singers, Edwin Hawkins Singers and Nina Simone represent some of the most popular gospel, soul and R&B singers of the day.

Jazz, in its various guises, gets in on the act as well, with Herbie Mann, Ray Barretto, Mongo Santamaria, Max Roach and Abbey Lincoln all entertaining the exhilarated crowds.

One of the strengths of 'Questlove' Thompson's handsomely edited film is that it captures much more than just the music. Also framed are the inner pain, suffering and anger of a people racially segregated, economically and educationally disadvantaged, brutalized by the police, and whose communities were ravaged by the scourge of heroin.

Overwhelmingly, however, the face of Harlem presented in Summer of Soul is both positive and uplifting. "It was a good thing for Harlem," affirms one resident on the Harlem Cultural Festival, "because as much as Harlem has been maligned over the years for the crime and the drugs, there was a bunch of folk, law-abiding productive citizens, never used drugs, went to work every day... loved their community..."

Nevertheless, the presence of the Black Panthers as the festival's security team is a potent symbol of the political and racial tensions tearing at the heart of a country still reeling from the assassination of Martin Luther King in 1968. A country still embroiled in the bloodbath of Vietnam. And whilst for most Americans the Moon landing of July 20, 1969 was a welcome distraction and a source of pride, the news of this historic feat is greeted in Mount Morris Park with a chorus of boos.

"Never mind the Moon, let's get some of the cash in Harlem," states one young man dismissively. "What's up there on the Moon? Nothing," says another. "It's groovy for certain people but not the black man in America."

The rise in black consciousness during this period is also reflected in the changing sartorial styles of those in attendance. Alongside older folk dressed up in their Sunday best are hipsters in bell bottoms or people wearing brightly colored dashikis. Afros abound. Black revolution, cultural and political, is in the air.

And in the music too. Stevie Wonder, aged nineteen, rocking out on an electric keyboard, is transitioning towards a funkier brand of soul music that is far removed from his early Motown, child-star days. The biggest revelation, however, is Sly and the Family Stone, this "proto-Prince" who's electrifying, psychedelic twist on gospel, soul and funk goes down a storm.

Powerful too, the naked emotion in Mahalia Jackson and Mavis Staple's rendition of "Precious Lord Take My Hand," a moving tribute to Martin Luther King.

Gospel music represents a hefty slice of the music in the film. The passions it arouses and the catharsis it provides are plain to see. The Afro-Cuban and Latin jazz depicted reflect Harlem as a cultural melting pot, home also to black Panamanian and Puerto Rican communities.

If there is a minor niggle it is the all too fleeting footage of Sonny Sharrock in full flight. A little more of the guitarist's raging intensity would have provided a striking contrast to all the slick Motown choreography and the sunny gospel harmonies. Sharrock's is catharsis of a more primal nature. His savage guitar trills and bodily contortions foreshadow Jimi Hendrix' tortured "Star Spangled Banner" at Woodstock.

Other highlights include a young Hugh Masekela in fiery form, some thrilling drum pyrotechnics from Max Roach, and David Ruffin of The Temptations leading an enraptured crowd on "My Girl."

That this documentary exists at all is thanks in large part to TV producer Hal Tulchin, who shot fifty hours of footage over the six days. But apart from one-hour highlights aired by two TV companies at the time, the reels lay undisturbed in Tulchin's basement for the next half a century, despite his best efforts to find backers for a more substantial documentary.

Had he been able to do so then the Harlem Cultural Festival would quite possibly have attained the same sort of mythical status accorded Woodstock—the three-day festival held that same summer and immortalized in Michael Wadleigh's Oscar-winning documentary film.

But America's white-run studios clearly weren't ready for such positive and powerful representations of black cultures with all their political overtones.

Nina Simone's performance at the Harlem Cultural Festival—brilliant though it is—could hardly have helped Tulchin's cause. Reciting the poem 'Are You Ready?' by David Nelson of The Last Poets, Simone addresses the crowd thus: "Are you ready black people? Are you ready to kill if necessary?...Are you ready to smash white things? To burn buildings, are you ready?'"

Politics is never far from the music in 'Questlove' Thompson's documentary. The Reverend Jesse Jackson, sporting an Afro and yellow dashiki, addresses the Harlem crowd. New York's white mayor, John Lindsay—a popular figure in Harlem—makes an appearance beside festival producer Tony Lawrence, a colorful character who had to use all his charisma and contacts to make the Harlem Cultural Festival a reality.

"That concert was like a rose coming through cement," affirms one resident remembering the impact of the Harlem Cultural Festival. Thanks to Tulchin and 'Questlove' Thompson the rose has blossomed again. Only this time it is unlikely to fade away quite so quickly.