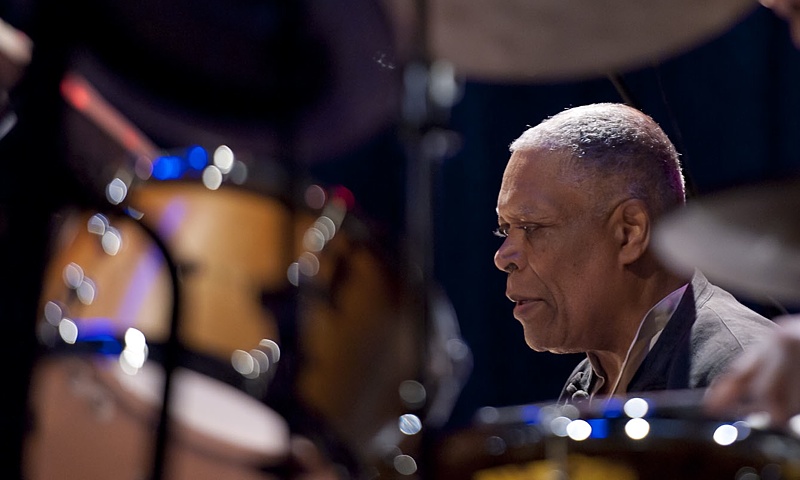 We're still trying to get in touch with that same emotion that everybody refers to as swinging or grooving or funky or whatever. It's just that now we have so much more of a vocabulary to choose from. &#151Billy Hart

The ubiquitous drummer Billy Hart brings a special energy to the many projects of which he is a part. A band leader, composer and educator, he's been on hundreds of albums. He has taken the stage with countless bands, adding his rhythmic pulse to formations led by a litany of the biggest names in the business.

And at each concert, when Hart is being introduced by whomever the leader—Christian McBride, Eliane Elias, Joe Lovano, the Cookers—they always do so beaming with pleasure. It never fails. It's always done with a sense of genuine warmth. They know Hart has their back. He brings a quality to the music that's appreciated, whatever the situation.

That has resulted in a long and busy career for the Washington, D.C. native, that includes associations with musicians like Jimmy Smith, and Wes Montgomery, McCoy Tyner, Wayne Shorter, Eddie Harris, Pharoah Sanders, Marian McPartland, Herbie Hancock, Stan Getz, Shirley Horn, Miles Davis and many more. Sideman gigs still keep him busy, as does teaching, but he also leads a noteworthy band that recently released a new album, One Is the Other (ECM). The band is comprised of saxophonist Mark Turner, pianist Ethan Iverson and bassist Ben Street. It's a lush, free-flowing collection of songs from a group formed to comply with Hart's quest for pushing music forward, using a variety of influences from music he has listened to from all over the globe.

"We have been together for a while. I think it's a situation where I offer a certain amount of experience to them in exchange for the youthful, new innovations that they bring to the table," says the drummer. "That's a healthy combination from my viewpoint. It gives me more energy and gives the whole situation more depth. As far as being free form, it's not as free as it would seem. The intent is still the same as it was with Louis Armstrong. The intent is to get in touch with that emotion. People give different names to it, because there are a lot of people who don't think of this music as classical music. So they've never given it any kind of name or nomenclature. We're still trying to get in touch with that same emotion that everybody refers to as swinging or grooving or funky or whatever. It's just that now we have so much more of a vocabulary to choose from.

Jazz music, to Hart, is inclusive of new ideas, expansive rhythms, other forms and other genres. The world is a smaller place now and that's applicable to the music and sounds embedded in it.

"In other words, as great as all the older masters are, in terms of commercial contact with the audience ... I don't think of Count Basie as being thoroughly connected, authentically, with Cuban rhythms. Today you have to be. I don't think of Fletcher Henderson or Earl 'Fatha' Hines as incorporating a lot of Indian rhythms. But today, you have to. We're talking about a vocabulary that defines a whole culture, so it's a whole new study of these different cultures. The world is getting smaller, and we're becoming more and more—at least through the music—one people. When you add the improvisation factor, as opposed to cutting things down for commercial purpose, then you have a lot to choose from. What it becomes is: How good are you at making choices in a compositional way?"

The eight songs on the new disk are all originals except one ("Some Enchanted Evening"), penned by Hart, Iverson and Turner (not on tandem). They have a certain open feel, with each member of the group adding their voice. It's never rushed; rather the songs unfold and their stories are told at an easy pace.

"They say Wayne Shorter listens to the music of a lot of film scores. I suspect in some ways, John Coltrane did the same things. I think there was a way, not only harmonically, but melodically, to look at different cultures and different ideas and see how that relates to the human emotion ... The vocabulary is much broader today. You learn all this stuff in school now. I think if you grew up in Russia in 1875, you know, you had the academic encouragement to really investigate music on a high level, based on the experience of maybe 500 years of study. Whereas in this country, we've barely had 100 years [of jazz]. Now, we've got all of these schools. Duke Ellington didn't go to a music conservatory. Most of today's innovators are coming out of universities. There's more of an academic concentration. So it's easier to explore all these different avenues. It's come to a lot of these guys are mastering these events or whatever, and they include them in their music. That's something that started happening right around my time. There were people that studied European classical music. That was considered the highest level of music education in the United States in those days. Miles Davis went to Julliard. That was a big thing. But now you can go to Julliard, but you can study not only Louis Armstrong, but Ravi Shankar. Not only Fletcher Henderson, but Eddie Palmieri."

His younger bandmates have not only academic studies, but valuable experiences with other bands. "Ben Street has been playing with Danilo Pérez for longer than he's been in my band. So his knowledge of, not only Afro-Caribbean rhythms, but African rhythms, is extensive. In a very authentic way," Hart explains. "As great as Lennie Tristano was, he didn't have a whole lot of Afro-American that were into Lee Konitz and Warne Marsh the way Mark [Turner] is. With that cross-cultural strength, they have so many ways to respond to me."

Hart's grandmother was a piano accompanist for the great opera singer Marian Anderson, "so growing up, just by circumstance, I began, by osmosis, to pick up a lot of the European classical repertoire, through my grandmother being a concert pianist. I didn't go to the conservatory to hear that, I grew up listening to it like another kid of the same age would grow up listening to the Beatles or something. Whatever the media puts in the forefront. So somebody like Ethan [Iverson], who had that gig with the Mark Morris Dance Group, where he had to be familiar with a lot of contemporary European classical concepts, he can sense my familiarity. Plus it works a lot with his expertise."

"And, of course, we wouldn't be invested in this music at all if it wasn't for the blues. Our desire to be related to the blues; anybody that loves so-called jazz. So we have all that in the mix. You're constantly going back and finding great blues masters for that strength and the emotion that gives you. And how you hear it in everybody else. Milt Jackson. Eddie "Lockjaw" Davis. Horace Silver. Hampton Hawes. Thelonious Monk. The guys that would emulate blues phrases in their playing. Then you have somebody like Wynton Kelly who would infuse those blues phrases with a sort of Afro-Caribbean sensibility, not unlike Sonny Rollins."

He adds, "From what we're playing, or what I'm being encouraged to reach for, is something that Coltrane called 'multi-directional.' Once Rashied [Ali, drummer] joined the band. Coming from those innovators like Milford Graves and Andrew Cyrille, Rashied Ali, Sonny Von Murray. Once it gets to my age group, there were guys like Barry Altschul, Stu Martin, Han Bennink, Jon Christensen out of Norway. Chicago ACM guys. Don Moye. This vocabulary is ongoing. What seems to be inventive today is going to be commonplace tomorrow."

Hart is pleased with the recording, but already looking ahead to what the band can do next and what challenges and surprises might be lurking. "I'm looking forward to making another [record] and making our purpose clearer to people who want to listen to us. With all these choices, it gives us new ways to push the envelope."

Hart recalls a conversation with Coltrane years ago, when the topic of the latest release by the saxophonist came up. "And he was saying, 'I've done that already. I'm not listening to that anymore.' I said, 'John, maybe you should.' He said, 'Aww, man. Come on.' Ellington too. Someone asked him in an interview what was the best thing he'd ever done. And he said without any hesitation, 'The next thing.' It's the excitement of being able to go on from what you've already done. It giving you more energy to go out and find these limitless ways of creating. It's an amazing inspiration," Hart says with enthusiasm. "It can be so exciting, these inspirations, that it's almost euphoric. Hopefully that translates to the audience."

Hart's own inspirations come from the blues and jazz that he listened to, as well as soul musicians like Otis Redding and Sam and Dave that he played with as a young man in D.C. He's basically self taught on the drums. As he developed and began getting more serious about the music, Albert 'Tootie' Heath, who with his brothers Jimmy and Percy, were making themselves known in Philadelphia. It was Albert Heath that turned Hart on to Ornette Coleman. "Ornette Coleman was quite the conversation piece. His drummers were Ed Blackwell and Billy Higgins, which now are household names. Their music and their drumming is a major influence on the way music is today. Even popular music."

Another Washington D.C. native Jimmy Cobb, was also a huge influence on Hart. "When I played with Wes Montgomery," the drummer notes, "it became obvious Jimmy was his favorite drummer, so he was happiest when I pursued that direction."