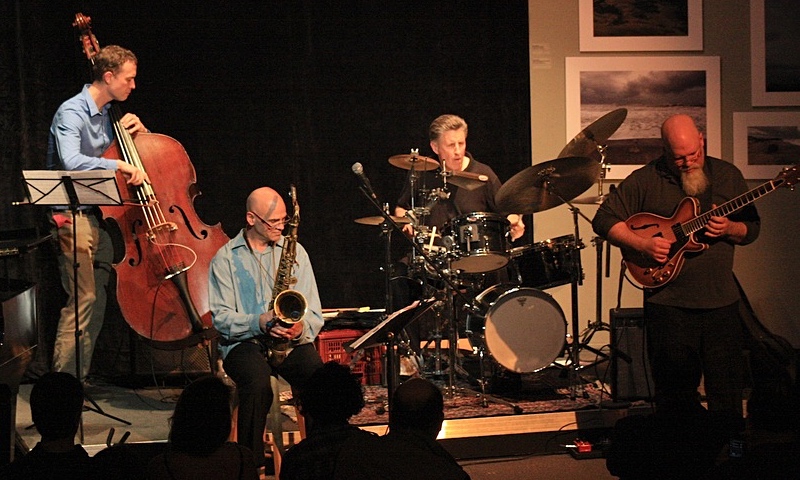 By KARL ACKERMANN
September 29, 2017
Sign in to view read count
Marching bands, ragtime music, and the blues, were all well-entrenched and spreading up the Mississippi River Valley from New Orleans at the beginning of the twentieth century. Dixieland was the popular music staple and with the all-white Original Dixieland Jass Band recording the first jazz side, "Livery Stable Blues," in 1917, an original musical language was validated. By the early 1920s, that group was moving away from the early form of jazz, settling into contented and bland dance music. But the etymology of jazz was progressing quickly among others musicians in the city. Caribbean rhythms, Creole influences, the call and response of hymns, and the music of freed slaves were coming together to push the expansion of jazz beyond the frivolous and shallow Dixieland style. The contribution of the African slaves was the single most critical element to the development of modern jazz; they had taught themselves to improvise as a means of holding on to the last vestiges of their culture, and in the process, provided the most influential component of modern jazz.

Two blocks west of the French Quarter and adjacent to Congo Square, sits Basin Street. The location of low-income housing projects since the 1940s, the famous thoroughfare was the gateway to Storyville, a neighborhood that encompassed approximately five square city blocks. From 1897 to 1917, Storyville was the city's red-light district, designated as such by city officials in order to concentrate (and essentially ignore) almost every conceivable criminal activity in the city's statutes. Many local jazz musicians found their first venues in Storyville's saloons, bordellos, dance halls, hotels and restaurants, among them, King Oliver, Louis Armstrong, Jelly Roll Morton, Bix Beiderbecke, Buddy Bolden and many other names now lost to history. But Storyville and jazz, for all the urban mythology, was a short-lived marriage; with the start of World War I, segregated red-light districts were deemed as health hazards in areas where military bases were nearby. Storyville, to an increasingly diminished extent, continued to function into the 1930s at which time it was almost completely demolished to make room for public housing.

If the establishments of Storyville were the de facto jazz clubs of the era, the Mississippi and Ohio Riverboats were their evolutionary successors. King Oliver left New Orleans in 1918, largely due to the closing down of Storyville, but the move was likely exacerbated by a dance hall fight that led to his arrest. Oliver headed to north to Chicago where a number of New Orleans' popular players had gone before him. One of them, clarinetist and bandleader Lawrence Duhé, had come up through the ranks with Kid Ory and his musical timeline included a performance at the 1919 Chicago World Series—the infamous Black Sox Scandal. Duhé offered Oliver a spot in his Chicago group. By 1922, Oliver was leading his own his own band and had sent for his protégé—Armstrong—to join his Creole Jazz Band. In Jazz on the River (University of Chicago Press, 2005), William Howland Kenney documents his study of the riverboat's place in the geographic migration of jazz. One such riverboat, The Sidney, debuted in 1911 and was the first to feature a New Orleans band. Others, such as The Capitol and The Queen followed suit in making music, and dancing, a marketing incentive for cruises. For the black musicians, the cruises offered much more than their typical venues; extended engagements, relatively decent pay, and lodging—an evasive amenity in the South for black musicians.

While the relatively small footprint of the riverboat kept black musicians and white patrons in closer proximity, it was only in passing. The less than collegial confines of the boat played out as a microcosm of the Jim Crow South. A mutual sense of unease made for wild speculation; one patron interpreting Armstrong's scat singing as a threatening voodoo chant. Still, Armstrong and musicians such as Baby Dodds, Johnny Dodds, Red Allen, Lil Hardin Armstrong, Fate Marable and John St. Cyr played the boats cruising as far north as St. Louis or Saint Paul, Minnesota. Frequently, musicians would disembark and play for a night or two in one of those cities then ride the Illinois Central train to Chicago.

The Chicago World's Fair of 1893 (also known as the World's Columbian Exposition), drew many ragtime musicians from the South, particularly pianists. The migration had set the stage for jazz musicians much the way the fair triggered an economic boon that built demand for dance halls and cabarets, especially on the city's south side. Hotels, in and around the Chicago Loop—the city's central business district—provided nightclub space for jazz acts. The Palmer House Hotel contained the Empire Room, the Stevens Hotel featured the Boulevard Room and the Panther Room was located in Sherman Hotel. These venues were primarily designed for big band dancing but also transmitted live radio broadcasts. The opening of independent clubs largely coincided with Prohibition, many functioning as speakeasies, typically located in, or just outside, the Loop.

Possibly the oldest jazz club in the U.S., The Green Mill is certainly the longest running establishment of its kind, opening in 1907 in Uptown Chicago, on Broadway. Originally known as Pop Morse's Roadhouse, it was taken over by an entrepreneur named Tom Chamales in 1910, and renamed as the owner's tribute to the Moulin Rouge in Paris. Charlie Chaplin, who had composed "Smile," a hit for Nat "King" Cole, would occasionally stop in for a drink when he was filming at a nearby studio. The visitors to come later were far more nefarious. During Prohibition the club was leased to the mob by its new owners, the Chamales Brothers, and a large stake in its ownership went to Jack "Machine Gun" McGurn, reportedly the principal gunmen in the St. Valentine's Day Massacre. McGurn was employed by Al Capone. Though Capone owned a speakeasy across the street, his chosen hangout was the Green Mill where bribes to the Chicago police allowed the bar to operate freely.

In the years of Prohibition, a gig at the Green Mill was a mixed blessing. A singer and comedian, Joe E. Lewis, failed to renew his contract with the club after a competing mob-run club offered him a more lucrative contract. The infamous mobster, Sam Giancana and two other Capone associates visited Lewis, leaving him for dead. Lewis, a crony of Frank Sinatra recovered eventually, and re-signed with the Green Mill while, McGurn, who ordered the hit, was himself, gunned down not long afterwards.

In the early years of the Green Mill, top-name talent included Ruth Etting, Billie Holiday, and Anita O'Day who all launched their careers, in part, by appearing at the club. In later years the club featured Shelia Jordan whose engagement was taken over by Patricia Barber and her quartet continues, in 2017, as the Monday night house band. Upcoming shows include the Dave Liebman Quartet, Matt Ulery's Loom Large and Kurt Elling. The club also features its After Hours Green Mill Quartet Jam Session, a relatively fixed group that performs weekend from midnight to five in the morning.

The Club DeLisa was a significant venue in the black community, opening in 1934 and featuring well-known artists such as Count Basie, Sun Ra, Albert Ammons, and Fletcher Henderson. The club remained open twenty-four hours a day and hosted a regular show with a mid-sized house band and gambling, discreetly hidden in the basement. The club burned down in 1941 but was quickly rebuilt, remaining open until 1958. It reopened as "The Club" in the mid-1960s with Cannonball Adderley's quintet being one of the first groups to perform there. Their album Mercy, Mercy, Mercy! Live at "The Club" (Capital, 1966) was described in liner notes as having been recorded at the Chicago venue when, in fact, it was recorded in Capital's studio.

The Friar's Inn was a well-known Chicago jazz venue in the 1920s, and like the Green Mill, it was a mob-run nightclub located on South Wabash in the Loop. The basement speakeasy was owned by Michael Fritzel who arrived in Chicago on a cattle train in 1898, worked as a bartender and later made the acquaintance of Al Capone. Fritzel was associated with more than one Chicago club, the common denominators being the mob and jazz. The New Orleans Rhythm Kings (originally called the Friar's Society Orchestra) was a group made up of New Orleans and Chicago musicians and were the most prominent performers at the club. Other acts included the Kansas City reed player Frank Teschemacher and saxophonist/clarinetist Bud Freeman.

The HotHouse was a multi-purpose club on Balbo Avenue. With an immense main room and dance floor, the club hosted Roscoe Mitchell, Gil Scott-Heron, Henry Threadgill, Susie Ibarra, Dewey Redman and many others before losing its space in 2007. Since that time, HotHouse has continued to host events from remote locations but only a small percentage are jazz-specific.

Fred Anderson and the Velvet Lounge

I met the legendary free jazz/avant-garde saxophonist Fred Anderson on one of my visits to his Velvet Lounge on the Southside of Chicago. Anderson regularly made a point of greeting guests at his unassuming club on East Cermack, where the walls featured multiple portraits of Charlie Parker -Anderson's inspiration. The Louisiana native was self-taught on the saxophone and developed into an influential artist in the 1960s Chicago scene. Anderson was a founder and working member of the Association for the Advancement of Creative Musicians (AACM). He established his career recording on two Joseph Jarman albums on the Delmark label: Song For (1967) and As If It Were the Seasons (1968). In the early 1970s Anderson formed his namesake sextet, a group that included trombonist George Lewis and drummer Hamid Drake. His first release as a leader was Another Place (Moers, 1978) and he went on to record twenty-five albums before his death in 2010.

Anderson made a conscious decision to stay close to his family and support them with a regular income, so in 1983, he purchased the Velvet Lounge. What made the club unique was its unabashed commitment to providing a Chicago venue dedicated to free jazz, the avant-garde and experimental music. Anderson himself performed frequently at the lounge and recorded three live albums on site. A fourth release A Night at the Velvet Lounge: Made in Chicago 2007 (Estrada Poznańska, 2009), was actually recorded in Poznań, Poland, at the second "Made in Chicago Festival."