Pianist Albert Ammons was the king of boogie-woogie, a bluesy jazz style that swept the United States, and then the world, from the late 1930s into the mid-1940s. Although his origins were modest, his powerful piano style would take him from Chicago barrooms to Carnegie Hall to the White House. As a soloist and in duets, Ammons's propulsive style gave life to classics like "Boogie Woogie Stomp" and "Pinetop's Boogie Woogie." Albert Ammons was one of the big three of late-'30s boogie-woogie, along with Pete Johnson and Meade Lux Lewis.

Ammons was born on September 23, 1907, in Chicago, Illinois. Both of his parents were pianists, so it was little surprise that he had learned to play by the age of ten. He also played percussion in the drum and bugle corps as a teenager, and was soon performing with bands on the Chicago club scene. After World War I, he became interested in the blues, and learned by listening to Chicago pianists Hersal Thomas and the Yancey brothers.

In the early-to-mid 1920s, Ammons worked as a cab driver for the Silver Taxicab Company and continued to reside in Chicago. In 1924 he met a fellow taxi driver who also played piano, Meade Lux Lewis. Soon the two players began working as a team, performing at clubs and house rent parties. Silver Taxicab eventually set up its own clubroom, complete with a piano, so that they would be able to find Ammons and Lewis when someone needed a ride.

Ammons started his own band at the Club De Lisa in 1934, and remained at the club for the next two years. During that time he played with a powerful five-piece unit that included Guy Kelly, Dalbert Bright, Jimmy Hoskins, and Israel Crosby. Ammons also recorded as Albert Ammons's Rhythm Kings for Decca Records in 1936. The Rhythm Kings' version of "Swanee River Boogie" would sell a million copies. Despite this success, he moved from Chicago to New York City, where he teamed up with another talented pianist, Pete Johnson. The two performed regularly at the Café Society, and were occasionally joined by Lewis.

In the late 1930s, all things boogie-woogie became a sensation, a trend that would hold true until the mid-1940s. The beginning of the trend coincided with Ammons's appearance at Carnegie Hall with Pete Johnson and Lewis in 1938, in John Hammond's "Spirituals to Swing" concert. Hammond's idea was to present a concert of black American music, from the blues and gospel music to contemporary jazz. At this concert black musicians would perform for an integrated audience. In 1938 this was fairly rare. Dedicated to blues singer Bessie Smith, who had died the previous year, the "Spirituals to Swing" concert was a watershed in blues and jazz history.

Hammond also made a political point in the concert's program. He noted that many of the artists who performed at the event were forced to work menial jobs to make ends meet or to perform their music for very little compensation. During this time Lewis continued to work at a garage, and Ammons made as little as $9 a week for his piano work. While the Carnegie Hall concert wouldn't change these discrepancies for all players, it did bring more attention to Ammons and his two companions. Although this concert also included Count Basie, Sidney Bechet, Benny Goodman ... and many other top jazz and blues performers of the period, the Boogie Woogie Trio, as they came to be called, stole the show. Almost instantly, they became international celebrities. The success of the concert also led to Ammons recording with Harry James for the Library of Congress.

On January 6, 1939, Ammons and Lewis recorded several tracks that would help launch Blue Note, a new label that would become synonymous with jazz. German immigrant Alfred Lion, who had seen the trio perform at Carnegie Hall, invited Ammons to bring his boogie-woogie style to a New York City studio and record a number of solos and duets. One of those Blue Note recordings, "Boogie Woogie Stomp," became Ammons's theme piece. Ammons also recorded solos and duets for Solo Art and even recorded in other band combinations, including cutting five tracks with the Port of Harlem Jazzmen.

Ammons recorded with Pete Johnson for Victor in 1941, but it would be his last session for several years. He cut himself while making a sandwich, slicing the top off one of his fingers, and he later suffered temporary paralysis in both hands. A Musicians' Union ban also prevented Ammons and others from recording. When the ban was lifted in 1944, however, Ammons returned to the studio to record for Commodore with Don Byas, Hot Lips Page, and Vic Dickenson.

Although the boogie-woogie fad began to die down in 1945, following World War II, Ammons had no difficulty securing work. He continued to tour as a solo artist during this time, and between 1946 and 1949 recorded for Mercury. Ammons's last triumph came when he was invited to play at President Harry S. Truman's inauguration in 1949, the same year as his death at the age of 32. Even following his death, the pianist continued to assert a strong influence over a new generation of pianists, including Erroll Garner and Ray Bryant. 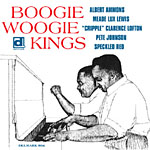 King Of Blues And...

All About Jazz musician pages are maintained by musicians, publicists and trusted members like you. Interested? Tell us why you would like to improve the Albert Ammons musician page.