The driving left-hand blues style known as boogie-woogie appeared around 1900 It began to surface in saloons, honky-tonks, bawdy houses, and "barrelhouses" in the South and Midwest around 1912.

"Barrelhouse" became synonymous with boogie-woogie. Music was generally supplied by a single pianist on an instrument in a questionable state of repair. The strongest possible expression of rhythm was therefore necessary, and the boogie bass supplied it perfectly. Primitive, gutsy, driving, it could be heard above the noise of the crowd and would work, at least in some keys, if the piano was missing a few keys.

Boogie-woogie spread more rapidly in the black community in the 1920s, became a national fad from 1938 to about 1945, and then rapidly faded from view. Yet it has remained a permanent favorite in the repertoire of most intermediate to advanced pianists, with some specialists still around. The first major popular recording artists to emerge from the field were Clarence "Pine Top" Smith (1904-1929) and Jimmy Yancey (1898-1951). The next generation of famous boogie players included Albert Ammons,Pete Johnson and Meade Lux Lewis.

Meade Anderson Lewis was born September 4, 1905, in Chicago, from a musical family. He acquired the nickname "Lux" because as a child he would imitate the excessively polite comic strip characters Alphonse and Gaston, calling himself the Duke of Luxembourg.

His father insisted he play the violin as a child. At age 16, when his father died, Lewis switched to the piano after hearing local boogie-woogie pianist Jimmy Yancey. Lewis was entirely self-taught on piano. He was a boyhood friend of Albert Ammons, and together they studied the music of Jimmy Yancey and other Chicago blues pianists. They also drove taxis together around 1924.

Lewis recorded "Honky Tonk Train Blues," in 1927, a driving boogie based on the sounds of the trains that rumbled past his boyhood home on South La Salle Street in Chicago as many as a hundred times a day. The record was released 18 months later in 1929, but attracted little attention. The recording company, Paramount, went out of business, and the record became almost impossible to obtain. In 1933, jazz promoter/producer John Hammond obtained a copy of Lewis's recording. He was so impressed with it that he embarked on a two-year search for the pianist. Hammond found Lewis in 1935, through Albert Ammons. Hammond found Lewis washing cars in a Chicago garage. After a few days practice, Lewis got "Honky Tonk Train Blues" back up to speed, and Hammond arranged a recording session to re-record it. The following year Hammond recorded Lewis's other classic, "Yancey Special" and booked him in a concert in New York. Following the concert, Lewis performed at Nick's in Greenwich Village for six weeks, and then returned to Chicago.

Hammond invited Lewis back to New York in ’38, to perform in his legendary Carnegie Hall concert From Spirituals to Swing, along with boogie-woogie pianists Albert Ammons and Pete Johnson. The performance was an enormous hit, setting off a minor riot among the fans and spawning a flood of boogie-woogie imitators. The boogie-woogie craze was on. The three pianists got together with blues singer Joe Turner and held down a long-term engagement at the Cafe Society Downtown.

Lewis had the most complex style of the three major boogie pianists. Noted for his power, fascinating polyrhythms and adventurous chord clusters, he had a vast repertoire of bass patterns and right hand riffs and figures. He was more intense and quicker than his mentor Jimmy Yancey, and he frequently varied his left hand by going into stride. He had a fertile musical imagination and technique to match.

He could keep a single boogie going for 20 or 30 minutes by careful use of his material: each chorus would be based on a single technical idea, which he would conclude with an unexpected twist. He used the whole range of the piano. Sometimes choruses would be linked developmentally and sometimes by dramatic contrast. He utilized dynamic variety and cross-rhythms much more than the other boogie pianists.

Lewis was an excellent whistler and could whistle the blues with the ease of a trumpet-like style. He recorded "Whistlin' Blues" in 1937. He also recorded blues played on the celeste and the harpsichord.

In 1941 Lewis moved to Los Angeles, where most of his appearances were relatively low-paying solo gigs. He made a number of short films in 1944, and appeared with Louis Armstrong in the 1947 film “New Orleans.” He made frequent appearances on television during its early years.

In 1952, along with Pete Johnson, Erroll Garner and Art Tatum he did a series of concerts on a US tour entitled "Piano Parade." In his later years he became frustrated at being identified purely as a boogie-woogie pianist and his playing was frequently rushed and perfunctory. After the boogie-woogie craze ended, Lewis continued working in Chicago and California, recording as late as 1962, although by then he was pretty much forgotten. Lewis led sessions through the years that have come out on a variety of labels, and he is recognized today as one of the masters of the two fisted barrelhouse boogie woogie players.

He died in a car accident June 6, 1964, in Minneapolis after a performance. 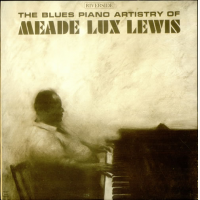 All About Jazz musician pages are maintained by musicians, publicists and trusted members like you. Interested? Tell us why you would like to improve the Meade Lux Lewis musician page.