The history of jazz and blues piano is an interesting one, and it benefits from being told separately from the history of jazz in general. The best performers didn’t always fit into the prevailing styles of the time. Boogie-Woogie piano developed largely in the Midwest, particularly Chicago, with the result that its practitioners were sometimes referred to as “western” pianists in order to distinguish them from the New York piano professors. Some players in this style developed in St. Louis or Detroit, but this blues-based variation was centered in Chicago, for it was there that the great Jimmy Yancey developed this approach and influenced many other pianists.

Pete Johnson began his musical career in 1922 as a drummer in Kansas City, Missouri. From 1926 to 1938 he worked as a pianist, often accompanying singer Joe Turner. In 1938 he and Turner appeared in the Spirituals to Swing concert at Carnegie Hall. This concert started a boogie-woogie craze, and Turner and two other performers at the concert, Meade Lux Lewis and Albert Ammons, became the foremost champions of this genre.

Pete Johnson is the foremost exponent of "Kansas City boogie woogie style". This is in contrast to to his colleagues of the Boogie Woogie Trio, Albert Ammons and Meade Lux Lewis from Chicago, whose main influences were Jimmy Yancey, Pinetop Smith, Hersal Thomas, Clarence Lofton and Jimmy Blythe. Meade Lux Lewis played a harmonic and rhythmic system all of his own, where as Albert Ammons relied heavily on his powerful touch and a swing-to-perfection which enabled him to emulate a Fats Waller like rhythmic tension. Pete Johnson was different. Although employing the physical approach of a mainly self-taught player to the keyboard, which when he played blues and boogie woogie, was an advantage. He was a player who had good knowledge of harmonics, structures, great command of rhythm and plentiful experience of swinging along with high caliber jazz musicians.

Pete Johnson’s recording legacy goes back to 1938 where he began laying down his distinctive piano style on the Document label. He backed blues shouter Big Joe Turner, and they did sessions together as far as 1955, which are available on various labels. There are compilations with his work with the “Boogie Woogie Trio,” as well as his solo efforts. He went on to record for Storyville, Savoy, Brunswick, Riverside, Apollo and Blue Note.

In 1950 he moved to Buffalo, New York but, despite problems with his health, continued to tour and record, notably with Jimmy Rushing, Turner, and Jazz at the Philharmonic. He toured Europe in a brief tour in 1958. Although he was not feeling well that year it was an opportunity he wouldn't pass up, and there was a possibility the publicity would help. He took off for Europe with his old friend Joe Turner among the other entertainers, in Europe there was always a capacity audience. His last performance was at the Newport Jazz Festival. He returned to Buffalo where he became ill with a heart condition and diabetes, followed by several strokes.

Pete Johnson contributed much not only to the history of blues piano, but his astounding virtuosity with the “Boogie Woogie Trio,” placed him in the master class. 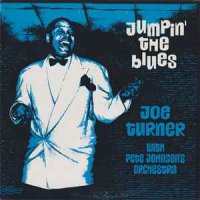 Master Of Blues And...

Master Of Blues And... 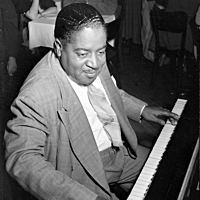 All About Jazz musician pages are maintained by musicians, publicists and trusted members like you. Interested? Tell us why you would like to improve the Pete Johnson musician page.