Blind John Davis, a Blues piano legend on Chicago’s West Side, accompanied many great blues musicians on their records, but released few of his own. Born in 1913, in Hattiesburg, Mississippi, his family moved to Chicago in 1916 making that his home since the age of three. He lost his sight at age nine and was playing piano by his early teens.

His father ran several speakeasies during the 1920s. As a teenager, he begged to play the piano and to be an entertainer. He learned blues, jazz and boogie woogie from the performers in his father`s establishments, he also became a fixture at the now famous rent parties.

Davis formed his first group in 1933, Johnny Lee’s Music Masters, which evolved into Johnny Davis’ Rhythm Boys. This group was widely traveled and by 1940 had acquired quite a reputation and repertoire of material. Davis was still connected in Chicago, and also became house pianist at Lester Melrose’s Wabash Music Company.He was pianist on literally hundreds of sessions for the Bluebird, Victor, Columbia, Okeh and Vocalion labels which were all under recording and studio contract with Melrose. His early sides with Tampa Red, Big Bill Broonzy, Lonnie Johnson, and Memphis Minnie are considered historic recordings.

Davis did some of his own records around 1938, and in 1949 -51. By the early 50’s he spent less time on the road, and stayed close to home in Chicago, though he did take a European tour with Broonzy in ’52. He subsequently returned to Europe over 30 times.

Acknowledged as a Blues master, he went on to lead small jazz tinged combos, played as a sideman for records and continued to record. His 1977 ``Stomping on a Saturday Night`` (Alligator Records) was a popular release and introduced him to a broader audience. His “Blind John Davis” released by Evidence in 1994, is still available. 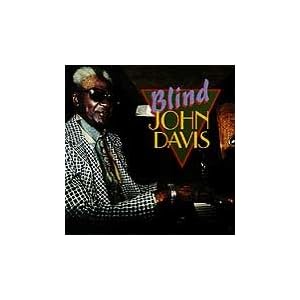 All About Jazz musician pages are maintained by musicians, publicists and trusted members like you. Interested? Tell us why you would like to improve the Blind John Davis musician page.