Big Joe Duskin, the blues and boogie pianist, was born in Birmingham, Alabama, but grew up in Cincinnati, where he began playing piano in his early teens. His first idol was Fats Waller, whom he heard on the local radio station WLW. What turned his mind towards the intricate art of boogie woogie was hearing the celebrated pianist Pete Johnson on such records as “627 Stomp,” “Rocket 88” and Dive Bomber.”

As a young man he played in clubs in Cincinnati and across the Ohio river in Newport, Kentucky, then an "open town" full of casinos. In later years he would reminisce about joints such as the Bucket of Blood, where an evening's playing might earn him two or three dollars in tips. He continued to play while serving in the army in the second world war, his engagements entertaining the US forces enabling him to meet his heroes Johnson, Albert Ammons and Meade Lux Lewis, then famous as the Boogie Woogie Trio.

After the war, Duskin took a job outside music, and it was not until the 1970s that he took it up again seriously, prompted by the Cincinnati blues historian Steve Tracy. He introduced himself to the international blues community in 1979 with the album “Cincinnati Stomp,” containing trenchant readings of boogie woogie standards such as Lewis's Yancey Special, interspersed with declamatory vocals. This recording turned out to be a major milestone in his career.

Within a few years he was being regularly booked on tours of Austria and Germany, where there were many enthusiasts of boogie-woogie piano playing. In 1987 he made his first visit to the UK, where his full-blooded music and genial manner won him an immediate and affectionate following. In that year he reached his largest audience yet by taking a substantial role in John Jeremy's film Boogie Woogie Special, made for The South Bank Show.

In 1988, accompanied by his friend Dave Peabody on guitar and other English musicians, he cut a second album, “Don't Mess with the Boogie Man.” He continued to visit Europe over the next two decades, though latterly at longer intervals, and recorded his last album in France, at the Quai du Blues in Neuilly.

In 2004 Duskin was presented with a key to the city by the mayor of Cincinnati, and in 2005 he received a heritage fellowship award from the Ohio Arts Council. A victim of diabetes, he was about to have both legs amputated, but died the day before the operation, on May 6, 2007. 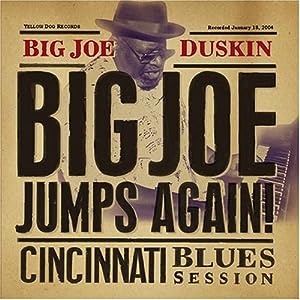 All About Jazz musician pages are maintained by musicians, publicists and trusted members like you. Interested? Tell us why you would like to improve the Big Joe Duskin musician page.