Lil Hardin helped introduce America to jazz music. She was a dedicated jazz pianist, who established a reputation as "Hot Miss Lil," one of the few female band ensemble members of the 1920’s. She played on many of the first jazz recordings ever made and she wrote many of the early songs of the jazz era. Though she might be identified in the jazz world as the wife of Louis Armstrong, she was much more than that.

Lil Armstrong was born Lillian Beatrice Hardin on February 3, 1898. Her grandmother, Priscilla Thompson, was born into slavery in 1850 in Lafayette County near Oxford, Mississippi. Her parents separated when Armstrong was very young. As a young child Lil lived with her mother in a boarding house in Memphis, a few blocks from Beale Street, a bustling nightlife area for blacks where much of blues and jazz music was beginning to take shape. Young Lil began playing the organ at early by taking music lessons at age six. By nine, she played the organ for sunday school, at 16, Lil won a music contest at her music school. It was this contest that made her realize she had a future in music.

Her mother concerned that her daughter's passion for music would lead her to a sinful life, sent her to Fisk University in Nashville. Lil began taking classes in the fall of 1915; enrolling in a college preparatory program and took high school courses in English, science, Latin, and home economics in preparation for college courses. She returned to Memphis in 1916 and continued to play the piano. However, when her mother discovered that she was playing the blues, what she considered to be "devil's music," she decided that Lil would have to leave Memphis and all of its negative influences. In 1917 they moved to Chicago. Lil landed her first job as a piano player at the Jones Music Store on Chicago's South Side, working afternoons at the store for $3 a week. Although the salary was meager, she had a store filled with sheet music at her disposal.

Although Lil was determined to build a career in music, it was difficult for her to find a band willing to include a female piano player. Her lucky break came when Lawrence Duhé and his New Orleans Creole Jazz Band came to Chicago looking for a piano player. They hired her at $22.50 a week. She tried to keep her job a secret from her mother, but mom eventually heard the news. She was not happy with her daughter's career choice, but decided that it was better than being a cook or a housekeeper.

Armstrong became known as "Hot Miss Lil" and was immediately popular on the nightclub scene. With her hard-pounding hands on the piano, youthful face, and slender body, she was an attraction all unto herself. She played like a man, but dressed like a Sunday school teacher. During her early years as a nightclub performer Armstrong played with some of the greatest performers of that time, including legendary cornet player Joe "King" Oliver and singer Alberta Hunter. Lil Hardin was a novelty among jazz bands. While it was common for women to front blues and jazz bands as a vocalist, it was unusual for them to play as part of the ensemble.

Armstrong followed King Oliver to San Francisco for six months, but she was soon homesick and wanted to return to Chicago. She married a singer named Jimmy Johnson and her travels were hard on her marriage. Armstrong returned home to her mother and husband and went to work at the Dreamland nightclub. Eventually King Oliver returned to Chicago with his band and he invited a New Orleans cornet player named Louis Armstrong to join him in Chicago. He also asked Lil to return to the band.

Louis Armstrong was smitten with Lil when he first saw her, but Lil was not as impressed and she was still married to her first husband. However, Lil and Jimmy Johnson soon separated and a romance began between Louis and Lil. Louis Armstrong was also becoming a musical sensation in Chicago, taking some of the spotlight away from Lil. Their personal relationship grew as their musical careers blossomed. Louis and Lil Armstrong married on February 5, 1924, after dating for about two years.

Lil and Louis Armstrong continued to play with King Oliver's jazz band. Soon they were recording one of the first jazz records ever, “King Oliver’s Creole Jazz Band.”(Gennett 1923) The band also toured the Midwest, traveling to Indiana, Ohio, Michigan, and Wisconsin. Lil was concerned that her husband's considerable talents were wasted playing second cornet to King Oliver, so she eventually persuaded him to leave the band. In 1924 Louis Armstrong landed a job as first trumpeter with Fletcher Henderson's Black Swan Troubadours in New York City. Lil followed her husband to the East coast, but she was not well received in the musical community. No one was eager to hire a female pianist, so she returned to Chicago by herself.

While her husband played in New York, Lil came up with a way to showcase Louis' talents and bring him the fame and recognition that she felt he deserved. She returned to the Dreamland nightclub and put together her own band which featured her husband on lead trumpet. The group was called Lil's Dreamland Syncopators and Louis was the main attraction. He earned $75 a week to perform at Dreamland, which was a huge sum of money for a black performer at that time.

In 1925 Lil and Louis Armstrong recorded “Louis Armstrong & his Hot Five,” for OKeh Records. The album included four songs written by Lil. A year later they produced a second album. However, while their careers were flourishing, their marriage was deteriorating. Louis had had several affairs while married to Armstrong, and in 1925 he moved in with his girlfriend, Alpha Smith. He also left Armstrong's band at Dreamland and led a new band called Louis Armstrong and His Stompers at the Sunset Café. Despite their strained personal relationship, Lil and Louis Armstrong continued to write songs and recorded “Louis Armstrong & his Hot Six” ( OKeh 1928) and she continued to work as his manager. Lil also decided to return to school to get a formal music education. She enrolled in the Chicago College of Music and earned a degree in 1928.

In 1929 Chicago's nightclubs suffered from a federal crackdown on organized crime, so Louis moved to New York, Lil followed and enrolled in the New York College of Music. After procuring her postgraduate degree Armstrong returned to Chicago, for she no was no longer Louis' manager. For the next two years Lil and Louis had an on and off relationship and she accompanied him to California and New Orleans. However, in 1931 Armstrong grew tired of Louis' infidelities and connections to organized crime gangs, and she separated from him. While Louis toured Europe, Armstrong formed two all- female bands in Chicago in 1931 and 1932. From 1933 to 1935 she led an all-male band based in Buffalo, New York, but the group suffered because audiences were not very receptive to a female band leader.

In 1935 Armstrong returned to Chicago and formed another nightclub and recording band. Instead of playing the piano, Armstrong arranged the music, wrote songs, and sang. In 1936 “Lil Hardin Armstrong and Her Swing Orchestra” recorded an album and five out of six songs were written by Armstrong, including one of her most popular songs called "Just for a Thrill." She continued to write songs and record albums for Decca Records for the next several years.

In 1938 Lil Armstrong finally agreed to divorce Louis, but they remained close friends for life. She recorded a session with Decca Records in 1940, but was back in the studios in 1947, She continued to record sporadically up until 1963, often with the old gang of New Orleans/Chicago musicians like Johnny Dodds, Red Allen, Zutty Singleton, Frankie "Half-Pint" Jaxon, Lonnie Johnson, Buster Bailey, Natty Dominqu, Lovie Austin, and Sidney Bechet. Lil kept active in the music business for the rest of her life, although far from the limelight.

In 1952 and 1953 she traveled to Europe to perform again. Her warm reception in Europe convinced her to return to Chicago to renew her performing career. However, by that time the music scene had changed dramatically, as had race relations in America, and Armstrong was unable to rebuild an audience. Armstrong recorded one more album in 1961 when she was invited to participate in a series of recordings called “Chicago-- The Living Legends.”

Lil spent the last decade of her life giving occasional performances and following her ex-husband's career. Louis Armstrong died on July 6, 1971, after suffering from heart and kidney problems. Lil Hardin Armstrong died just seven weeks later during a performance at a memorial concert for Louis in Chicago. Throughout all her success and failures, she remained true to her own moral vision and, in doing so she became a role model for how to achieve goals in life while remaining true to one's self.

Lil Hardin was an accomplished musician who was present at a seminal point in the formation of jazz, and one of the members of the Hot Five, her reputation stands on that! 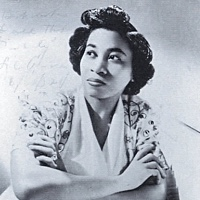 All About Jazz musician pages are maintained by musicians, publicists and trusted members like you. Interested? Tell us why you would like to improve the Lil Hardin Armstrong musician page.